Npower has sent an email to some customers saying a smart meter installation has been booked in.

The email contains a date and time and instructs the customer to call the firm to confirm or re-schedule the appointment.

But nowhere in the email does it say smart meters are not compulsory and it is up to consumers if they want to have one fitted.

We were alerted to the Npower email after several readers contacted us after receiving one. 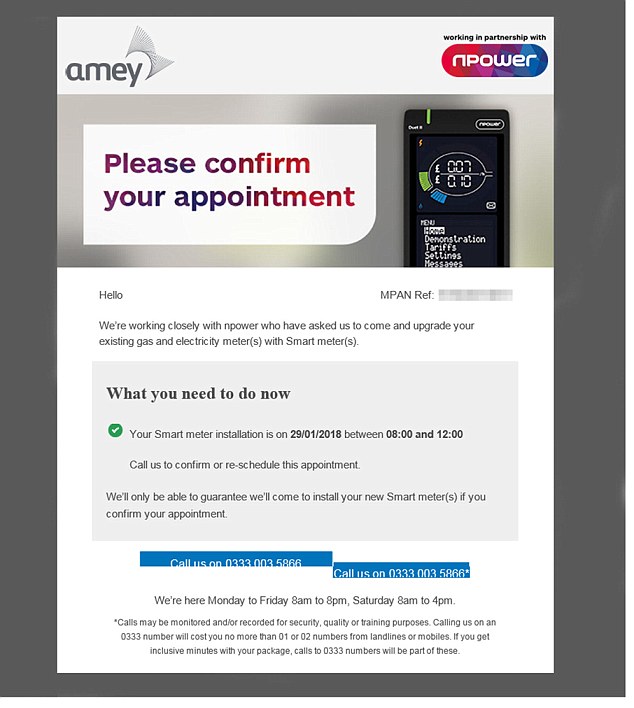 One reader, Dawn, sent us the email she had received from Npower (pictured). There was a similar message in her online account space when she logged in.

Dawn called Npower after receiving the email and told us: ‘When I did the man I spoke to was very determined I should have it fitted. I stood my ground and told him I was definitely not and he eventually had to give in.

‘Not a great customer experience. If I hadn’t known better it gave the impression smart meters are compulsory.’

Noel Mooney also sent us a copy of a slightly different email he received. He said the email offered either that he accept the appointment or make another one, by contacting Npower online or on the phone, and nowhere was there any mention of cancelling it.

It said: ‘We’d like to come and fit your Smart meter(s) – but can only guarantee we’ll be able to fit them if you confirm this date or choose a new one within the next five days’.

GOT A SMART METER QUESTION?

If your energy provider pressuring you into getting a smart meter?  We would like to hear your story. Contact: rebecca.rutt@thisismoney.co.uk.

Do you have an energy question you would like to have answered? Contact: experts@thisismoney.co.uk with the subject line ‘energy expert’

Mr Mooney was then either given a phone number to call or a link to contact Npower online to ‘confirm or change the appointment’.

We got in touch with Npower to ask it for a response.

A spokesperson said the emails sent with only a phone number to respond to (which Dawn received) were sent in error, and customers can respond by phone or email to these messages.

These came from a company called ‘Amey’ which is a third-party supplier used by Npower for some of its smart meter installations.

They also said if consumers did nothing after receiving the email about an appointment, it would not go ahead and they would need to actively ask for it to happen, either through confirming via email or on the phone.

They said: ‘Our customer communications around smart are in line with the Smart Metering Installation Code of Practice (SMICoP). The energy industry recognises the benefits of smart metering, and we want to provide our customers with the necessary information and insight on smart to enable them to make informed choices.

‘Smart meters bring many benefits to consumers, but they are not compulsory.

‘This email goes out to customers who have not contacted us to say they don’t want a smart meter fitted. ‘Customers who are offered an appointment but don’t want a smart meter can contact us to cancel, either online or by calling us; they can also amend their appointment using these channels.’

We also spoke to Smart Energy GB, the firm behind the rollout.

Robert Cheesewright, director of policy and communications at Smart Energy GB, said: ‘It’s crucial we modernise our energy system or we will be stuck in the past, crouching under the stairs with a torch to take meter readings and worrying about the shock of inaccurate, estimated bills.

‘Energy suppliers are trialling different approaches when it comes to arranging smart meter installation appointments and they are learning what works best for their customers.

‘A smart meter installer will never enter your home without your permission. How you respond to a letter offering you an installation appointment is entirely your choice. You can accept, re-schedule or cancel the appointment. You are not obliged to contact your energy supplier if you don’t want to respond.’

We also checked with Ofgem, which is in charge of regulating the energy industry and the body responsible for creating the guidelines around how energy firms can communicate to customers.

An Ofgem spokesperson said: ‘It is not compulsory to have a smart meter installed – consumers have a right to decline them and suppliers must not mislead consumers. Ofgem is working with suppliers offering smart meter installations to make sure their communications help their customers reap the benefits of smart metering and are transparent and accurate.

‘Energy suppliers are obliged under Government rules to aim to install smart meters for all their customers by 2020. They are allowed to use pre-booked appointments to install a meter, however customers can cancel or re-arrange these appointments. Smart meters have big potential benefits for consumers including ending estimated billing, providing real-time information about energy use helping to cut bills.’

We asked Ofgem to clarify under what circumstances an investigation would be opened, if an energy firm was found to be deliberately misleading consumers. 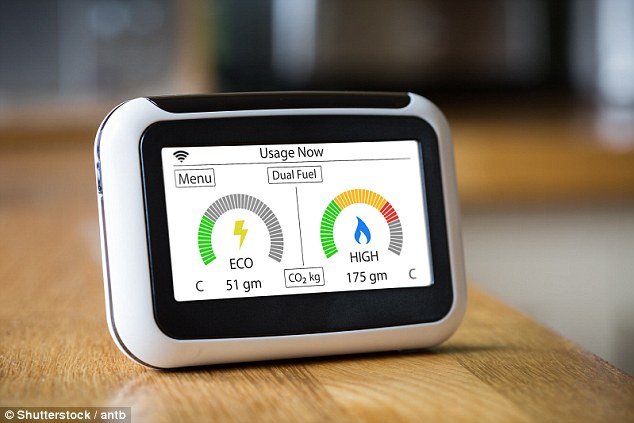 An Ofgem spokesperson said: ‘In deciding whether to open an investigation, we look at a range of factors, which include scale, detriment, and steps suppliers have taken to put things right.

‘We also use a range of options for making sure that suppliers comply with our rules, from working with suppliers to solve problems to running a formal enforcement investigation.’

Npower is not alone in sending out these kinds of emails. Last week we reported that Eon was sending similar messages out, and since then we’ve heard from lots of readers who have received these kinds of communications from their energy provider.

We’ve also seen examples from SSE and last year Eon agreed to change its messaging after our sister publication, Money Mail, reported it to Ofgem.

Homes in the UK do not have to switch their meters, and many consumers have told us they want to keep their standard meter following a raft of problems with the rollout.

Eon and the rest of the Big Six energy providers are obliged to offer a smart meter to all eligible customers by 2020, according to a government target.

The meters should make it easier to understand and pay for energy use yet there have been several teething problems with the rollout. Some of the first wave of smart meters installed may lose their smart functionality if switched to a different energy supplier.

We have also heard from a number of readers who do not want to have one installed for other reasons, such as fears over security risks or over the meter interfering with other household appliances.

The cost of the rollout is now being investigated by the National Audit Office.

Although the government deadline to install 53million smart meters is just two years away, figures show 8.6million have been fitted so far – some 84 per cent below target.

The NAO is looking into whether the multibillion pound rollout will actually save households money. It said it will assess the ‘current economic case for the rollout of smart meters’ and look at whether it is ‘on track on achieve its target by 2020.’

The results of the investigation will be published in the summer.