National Savings and Investments has hacked back the interest on its easy-access Direct Isa account – cutting by 0.25 per cent to pay just 0.75 per cent.

The move comes just a month after the Treasury-backed savings provider dealt a blow to savers by slashing the maximum deposit on its popular Guaranteed Income and Growth Bonds from £1million to just £10,000.

Savers will be particularly disappointed by the squeeze on rates considering the recent mini-revival in easy-access savings deals and a general expectation that the Bank of England will raise interest rates next month. NS&I must limit demand for savings, however, by government targets.

The new NS&I rate, introduced from September 24, means savers will earn £50 less in interest on their full £20,000 tax-free allowance over the course of a year. 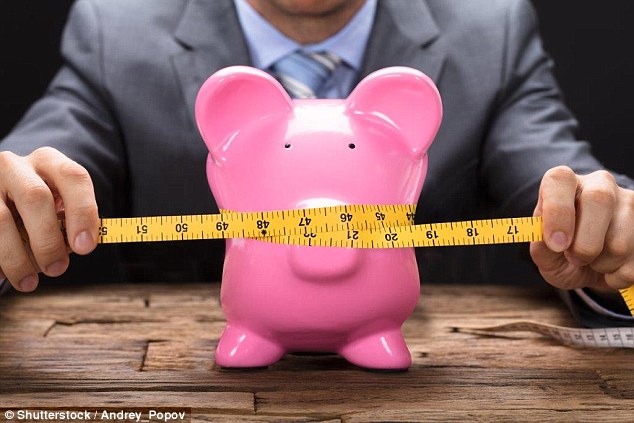 A squeeze on rates: Savers can earn more by moving their savings pots elsewhere as NS&I slash interest on its Direct Isa

Anyone with an account will be contacted by NS&I at least two months before the rate drops.

This gives savers enough time to move cash to a new provider without losing out on interest.

While no cash Isa rates beat inflation – which currently stands at 2.3 per cent – savers will earn less with NS&I compared to the top deals in our independent best buy tables.

According to research by Savings Champion, 57 per cent of all easy-access Isa rates on the market in fact pay rates over 0.75 per cent and savings rates across the board have reached two-year highs.

Deposits with NS&I are however 100 per cent backed by HM Treasury, while deposits elsewhere are only guaranteed up to the current £85,000 limit of the Financial Services Compensation Scheme.

This makes its accounts particularly popular with those with larger savings pots, as the alternative is to split their cash between several banks to ensure they are fully are covered by the FSCS.

According to NS&I the move has been made with taxpayers in mind.

Jill Waters, retail director at NS&I, said: ‘We have taken the decision to reduce the interest rate on our Direct ISA to deliver positive value for taxpayers.

‘As part of our operating framework, we must ensure that we continue to strike a balance between the needs of our savers, taxpayers and the stability of the broader financial services sector.

‘Our Direct ISA continues to gives savers the opportunity to earn a fair rate and benefit from tax free interest, while deposits into all NS&I products are 100 per cent secure, as NS&I is backed by HM Treasury.’

The move was not wholly unexpected according to Anna Bowes, co-founder of independent savings advice site, Savings Champion.

She said: ‘Although bitterly disappointing for savers, this is not a wholly unexpected move.

‘NS&I’s net financing target for the current tax year has reduced considerably since the beginning of 2017-18 and now stands at just £6billion.

‘It’s easy to see that reducing its rates could be on cards in an attempt to stem the flow of cash.

‘This is hot on the heels of its announcement last month that savers would be able to deposit just £10,000 each into the NS&I Guaranteed Income and Growth Bonds, reduced from £1million.

‘Now NS&I has wielded the axe on the rates on offer and it may not end here.’

What are the best tax-free alternatives?

The top tax-free easy-access savings rate currently on the market is offered by Al Rayan Bank at 1.35 per cent.

The bank is sharia compliant, so the rate is an expected profit rate rather than guaranteed interest. You can read more about how sharia banks work.

The next closest alternative is Paragon Bank’s new Limited Edition Easy Access Cash Isa at 1.31 per cent followed by Shawbrook Bank and Virgin Money at 1.3 per cent.

If you are willing to lock your cash away in a fixed-rate Isa you will earn more.

Again Al Rayan Bank comes out on top at 1.6 per cent. That earns you an extra £50 in interest on the full tax-free allowance compared to the top easy-access deal.

Following close behind is Bank of Cyprus UK with a rate of 1.52 per cent, then Coventry BS at 1.5 per cent and Paragon Bank and Ford Money at 1.45.

Ford Money also offers the ability to split your pot between easy-access and fixed Isa rates under the same Isa wrapper as part of its Portfolio Isa.

Over a longer term the best rates in This is Money’s independent best-buy savings tables are Al Rayan Bank again at 1.8 per cent on a two-year deal, Shawbrook Bank at 1.85 per cent over three years.

The highest rate on the market currently is United Trust Bank at 2.25 per cent for a five-year deal.

You may also want to consider a stocks and shares Isa. Read here on how to start investing in one.