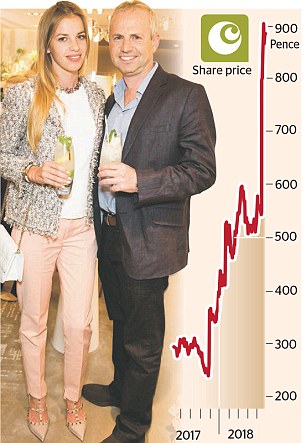 On the up: Tim Steiner with model  Patrycja Pyka

Ocado is poised to enter the FTSE 100 for the first time this week after its share price more than trebled in just six months.

The online grocer is worth £5.8 billion, making it valuable enough to join the ranks of the UK’s biggest listed companies in a FTSE 100 reshuffle on Wednesday.

Its share price has soared from around 240p per share to 887p in the last six months after it was boosted by deals in France, Sweden, Canada and the US to provide supermarkets with its pioneering robotic technology.

Despite trading at a loss, Ocado’s success with deal making means chief executive Tim Steiner, 48, is in line for a record £110m share-based bonus next year.

Steiner already has £236 million in shares but has used £68 million worth to cover the cost of his divorce from Belinda, 47, his wife of fourteen years.

He has since moved in with the Polish lingerie model Patrycja Pyka, 29.