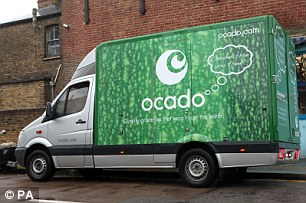 Ocado  is gearing up to take on Amazon by offering a super-fast delivery service.

The online supermarket, which also builds slick robot-operated delivery services for other grocers, said it was preparing to launch express deliveries similar to those offered by Amazon.

Shoppers who pay for Amazon’s Prime Now service can get items such as bread, sun cream and batteries delivered to their home within two hours.

Amazon offers the service in coordination with Morrisons, which also has a tie-up with Ocado.

Duncan Tatton-Brown, Ocado’s finance director, hinted that the rapid delivery programme could be offered through Morrisons – pitting it against the Silicon Valley titan.

‘There’s massive opportunity to grow our existing business, to make it more efficient, to support Morrisons,’ he told The Grocer magazine. ‘This is just the icing on the cake.’

Ocado has enjoyed a vast transformation after winning major deals with foreign supermarkets to supply them with its slick online shopping technology and factories.

Its share price has rocketed more than 280 per cent over the past year.

The deals have also won Ocado a prized place in the FTSE 100 index. It now employs around 300 people in its technology division and is ploughing money into the faster delivery service.

Ocado’s first warehouse in Andover, Hampshire, is the size of three football pitches and is run by hundreds of battery-operated robots which pick and pack items to be loaded into delivery trucks.

It takes just five minutes to pick 50 items for an order, compared to two hours for a human.

Tatton-Brown said that its robotic picking ‘will take efficiency to another level’. He refused to reveal a timeline for the faster service but said it was coming ‘relatively soon’.

Presenting Ocado’s latest financial results to investors this week, chief executive Tim Steiner boasted that the company has been compared to US giants Amazon and Rolls-Royce.

‘Even Greg Clark the Business Secretary is mentioning us alongside the likes of Amazon and Rolls-Royce because of our talent in artificial intelligence,’ he said.

Steiner said Ocado was working to improve its technology faster than ever after winning a deal to supply its delivery service to US supermarket Kroger, which he called a ‘game changer’.

It also recently landed contracts with grocers in France, Sweden and Canada.

‘The reason we need to go faster is because we are going to roll out more facilities faster than we had envisaged,’ he said. ‘We need to carry on innovating because we’re not content just to sit and sell the solution that we have today.’