Ocado‘s latest deal met with approval from the City today after as it announced it will develop Swedish supermarket ICA’s online shopping business.

Ocado shares rose after it revealed its fourth international tie-up and the group is ploughing ahead with its plans to focus on supplying technology to other companies as opposed to simply being a grocery seller.

As part of the deal, FTSE 250 listed Ocado will construct a high-tech automated warehouse for ICA, develop its online shopping website and provide the Swedish group with an ‘end-to-end’ e-commerce service. 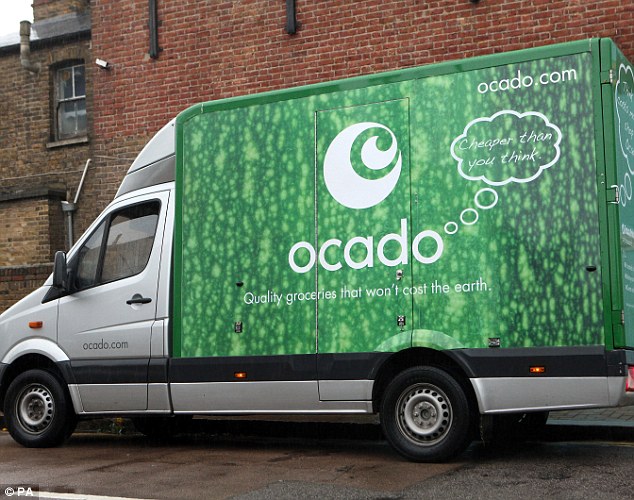 On the up: Ocado has seen its share price rise over 5 per cent this morning, after announcing a deal to develop Swedish supermarket ICA’s online shopping business

ICA have around 1,300 supermarket stores across Sweden and currently have a 36 per cent slice of the market.

Ocado and ICA will develop the first ‘customer fulfillment centre’ for online orders in the Greater Stockholm area, which will take around three years to complete.

Luke Jensen, chief executive of Ocado Solutions, said: ‘ICA has a strong track record of growth and innovation and our Smart Platform will give the ICA retailers the opportunity to provide their customers with new levels of service, convenience and value.

‘Our flexible, scalable and modular solution is uniquely positioned to address a fresh set of challenges and allow ICA to deliver its ambitions for online.’

Looking ahead, Ocado expects the deal to ‘create significant long term value’ to the business, with an ‘earnings neutral’ impact during the current financial year.

Anders Svensson, chief executive of ICA Sweden, said: ‘Our cooperation with Ocado entails that they will adapt their world-leading ecommerce platform to ICA’s business model with independent retailers.

‘At the same time, we will benefit from the fact that Ocado are continuously developing the platform for themselves and other leading grocery retailers around the world.’

Investors had been waiting for Ocado’s boss, Tim Steiner, to start developing the group’s technology supply operations for a number of years.

Over time, concerns grew that Ocado’s sole focus on churning out grocery orders from giant warehouses in the UK would be insufficient in providing decent capital returns for investors.

In November, Ocado announced it would be developing an automated warehouse for French retailer Groupe Casino.

Two months later, Ocado unveiled a partnership with Canadian grocer group Sobeys. The group also secured a deal with an as yet unnamed retailer last May.

Within the UK, Ocado has worked alongside Morrisons since 2013.

Commenting on the ICA deal, Connor Campbell, a financial analyst at SpreadEx, said: ‘After spending years frustrating investors with a lack of international deal, Ocado has unveiled a consistent string of them lately.

‘Though it may not be the big money US deal everyone is clamouring for, investors were still impressed, sending the stock back above £5.80 with a 5% rise.’