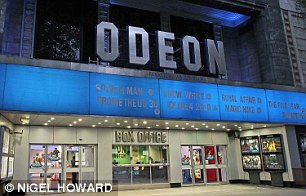 Odeon is gearing up to make its debut on the London Stock Exchange in a £1.4billion listing.

The cinema chain’s US parent AMC Entertainment is said to have appointed bankers at Citi to work on an initial public offering.

AMC has been investing in Odeon, as well as fitting cinemas with reclining seats and selling alcohol.

Bidders were said to be circling after AMC suffered a £32million loss in the three months to September.