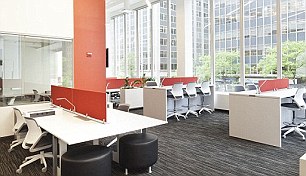 Office space firm IWG has received a fifth takeover approach – this time from a US property investment company.

Prime Opportunities Investment Group yesterday said its advances had been rebuffed but added that it could come back again.

This month, London-listed IWG said it had had bids from Starwood Capital and TDR Capital and an expression of interest from Lone Star.

That came after Canadian firms Onex and Brookfield Asset Management made a joint approach for IWG, only for takeover talks to fail.

IWG, which has offices in more than 3,000 locations, was founded by British entrepreneur Mark Dixon in 1989.

It has been under pressure recently, however, amid growing competition from newer rivals such as WeWork.

Under UK takeover panel rules, Starwood, TDR and Lone Star have until June 8 to make a firm offer or walk away.

The deadline for Prime Opportunities to make another bid is June 26.