More than £5billion of oil and gas projects will be approved as the North Sea undergoes a resurgence.

Experts predict a 5 per cent increase in production this year to up to 640,000 barrels of oil per day after years in the doldrums.

Despite billions of pounds of cost cutting and 175,000 job losses, the North Sea still has more rigs than any other region in the world.

Deirdre Michie, chief executive of trade association Oil & Gas UK, said: ‘This industry is adapting to a very demanding business environment and is now in a more competitive position as a result. It is fitter and leaner than many could have imagined four years ago.’ 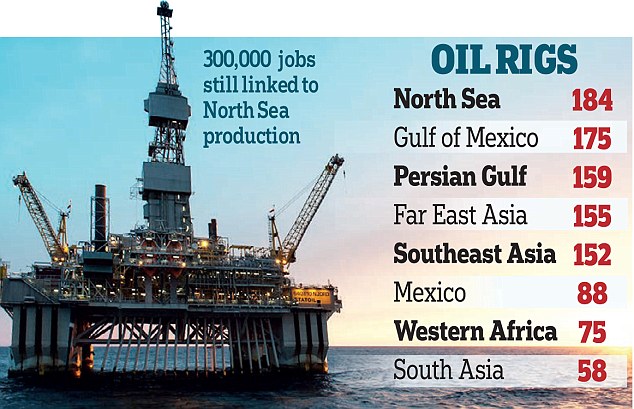 Estimates believe a further 10bn barrels can be extracted from the North Sea, even if it is dwindling since its 1970s heyday.

It still has 184 offshore rigs, more than the Gulf of Mexico, Venezuela and the Persian Gulf.

But the region has been hammered in recent years as majors went in search of younger oil basins and the oil price halved to under $50.

Forty companies in the oil and gas sector went bust in 2016 and about 175,000 jobs supported by the industry have been lost since 2014.

But amid the challenges, producers have become cleverer and better at extracting oil without waste, while smaller companies have jumped into the basin to keep projects going.

It means that although drilling and new fields have fallen sharply, production has risen 16 per cent since 2014, with around 80m barrels of oil added between 2014 and 2016.

That reverses a 14-year declining trend. With the oil price now picking up – to $67 a barrel yesterday, having hit $70 in January for the first time in three years – producers have more cash to splurge on projects.

The area is set to contribute £1billion in tax this year.

Oil & Gas UK said it expects up to 16 projects could be approved this year – compared to just two in each of the previous two years – worth £5billion.

Yesterday North Sea producer Enquest said it planned to raise production at its new Kraken North Sea field to up to 58,000 barrels per day this year, from just over 37,000 barrels.

Chief executive Amjad Bseisu hailed a transformational year for the group, which has also bought a 25 per cent stake in BP’s Magnus oil field.

Enquest is among several private companies to move into areas being exited by bigger oil firms, with Chrysaor buying assets from Shell and Neptune from Engie.

Despite some sell-offs, Shell has also been investing in the region, redeveloping its Penguin oil and gas field.

The supermajor’s director Steve Phimister said it plans to increase its North Sea production from the fields, which were first developed in 2002.

Independent oil and gas firm Faroe also said yesterday it remains on track to increase production by more than 35,000 barrels per day in the medium term.

However, despite the projects that could start this year, experts cautioned that low development drilling in the last few years mean production is likely to start falling again in the 2020s.

Michie said: ‘A production downturn will impact the economy and balance of payments, as more imports would be required to meet oil and gas demand, heightening concerns around the UK’s security of supply.’