One in five UK cars is fitted with ‘dangerous’ tyres

One in five cars on UK roads – accounting for more than eight million motors – have ‘dangerous’ tyres fitted to them, according to new research.

Comparison site Confused.com said it conducted 1,000 vehicle spot checks up and down the country and found that 21 per cent had at least one tyre that need to be replaced.

A further three per cent – representative of 1.4 million – were found to be running on illegal tyres that could land them with a fine in excess of £2,500 and three penalty points. 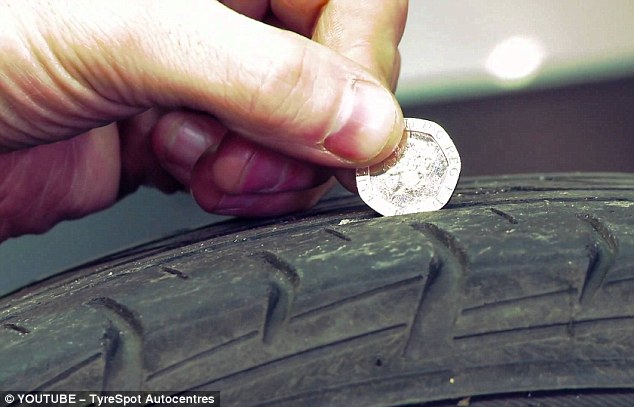 Tyre trouble: A spot-check of 1,000 UK cars found that one in five have tyres that need to be replaced and approximately 1.4 million vehicles are using illegal rubber that warrant a fine of £2,500 for each tyre

Confused.com said it traipsed around 10 major UK cities, scrutinising car tyres and measuring the tread depth remaining in the rubber.

The fifth it deemed as ‘dangerous’ were those with a tyre with tread below 3mm, which is the point at which major manufacturers recommend having it changed.

Those deemed illegal were found to have less tread depth than the legal limit of 1.6mm.

What’s more concerning is that three in five claim not to know if their tyres are illegal or not.

Even if drivers do know that their tyres are deemed legally unfit for the road, 55 per cent said they didn’t know how to check if they were roadworthy or not.

Not only is this lack of knowledge worrying on a safety level, it also means many drivers are risking fines in excess of £2,500 per tyre if they’re caught by police using balding rubber.

They could also receive three penalty points per illegal corner, which would could lead to a loss of licence and almost certainly drive insurance premiums higher.

It’s also little know that if you are involved in an accident and it’s later revealed that you had bald tyres, your insurer could void your claim and invalidate your policy, as your car would be deemed unroadworthy – the same would apply if your car failed its MOT.

The RAC suggests car owners use a 20p coin to check the tread remaining on their tyres.

The law states that tyres need 1.6mm of tread across the central three quarters.

Insert a 20p coin – if you can see the outer band, the tread is too low and you could be fined up to £2,500 and hit with three penalty points per tyre.

The motoring group also says you shouldn’t just just rely on the tread you can see.

It suggests feeling around the tyre as uneven wear could be indicative of issues with alignment or poor inflation.

While you’re checking the tyres, look out for any lumps or cuts – both of which could cause a dangerous blowout and should be fixed immediately.

You should also check the correct tyres are fitted to your car. Are they matching sizes across each axle? And do they have a suitable speed rating as recommended in your owner’s manual?

According to the latest data, tyre issues are the fourth most common reason for vehicles failing an MOT inspection, with 7.7 per cent of all vehicles last year failing for illegal tread depth or rubber that was deemed unfit for use.

The investigation also identified which cities it found the highest percentage of dangerous tyres.

Vehicles in Edinburgh had the highest number of cars fitted with tyres below the recommended tread of 3mm (27 per cent), while motorists in Newcastle and Ipswich had the highest rate of illegal tyres, both with an average of five per cent.

According to the research, London drivers are the most diligent with just 16 per cent of vehicles fitted with dangerous rubber, though motorists in Birmingham deserved a special mention after Confused.com found no cars in the midlands city with illegal tyres.

Amanda Stretton, motoring editor at Confused.com, said it was ‘worrying’ to find so many vehicles fitted with potentially lethal tyres.

‘Tyre tread ignorance could land offenders with fines of up to £2,500 per tyre, invalidate their insurance or lead to an accident,’ she said.

‘By conducting a few simple checks each month, such as the 20p test, drivers can keep themselves and other motorists safe.

‘Driving has become expensive enough as it is, and avoiding unwanted fines should be incentive enough to comply with road safety regulations.’