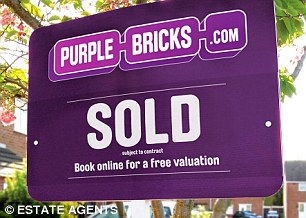 Purplebricks has come under fire over hidden fees

The website stated that customers could ‘instruct us to sell for £849’.

The small print added that the fee rose to £1,199 in London and surrounding areas.

Next to this was an icon which, when hovered over, revealed that for an extra one-off £300 fee the agency would conduct viewings.

Hunters Property Group complained that the information was misleading and that it did not make clear that the £849 had to be paid whether or not the property was sold.

The Advertising Standards Authority (ASA) said customers would understand £849 to be the total price they would pay for Purplebricks’ services.

It also said it was standard practice for estate agencies to only levy their fee in the event of a successful sale, and said that consumers were likely to assume the same.

A spokesman for Purplebricks says the agency will appeal against the ruling.