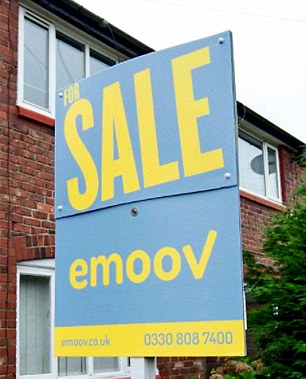 Countrywide, which owns scores of high street chains including Hamptons and Gascoigne-Pees, last week posted its second profit warning of the year, wiping more than £50 million off its stock market value.

Emoov founder Russell Quirk said: ‘Countrywide is on its knees. They have to do something.’

Last week Quirk renewed unpublicised overtures he made last October when he initiated merger talks. He proposed that Emoov take shares in Countrywide and combine forces with its 850 high street branches.

Countrywide, led by chairman Peter Long, has not responded to the proposals. A spokesman said: ‘We are not in conversations.’

Its value has plunged from £1 billion to less than £90 million over the last two years, due to a subdued housing market.

In March, it announced a ‘back to basics’ campaign to reduce its £192 million debts.

Emoov has a valuation of £103 million after merging with online property firms Urban and Tepilo, set up by Channel 4 presenter Sarah Beeny. Emoov, loss-making since it was founded in 2009, expects to post a profit in 2020.

It also hopes to list on Aim in early 2019, joining its already listed rival Purplebricks.