Optimistic sellers have pushed the average price tag on homes coming to market to a fresh record high of £308,075.

The average price of newly-listed properties jumped £2,343 in the month to mid-May, despite estate agents reporting that sales are falling, property website Rightmove said.

Its report warned that different areas of the UK were operating at different speeds and that the overall picture is one of a less buoyant property market, where people will struggle to sell at high prices. 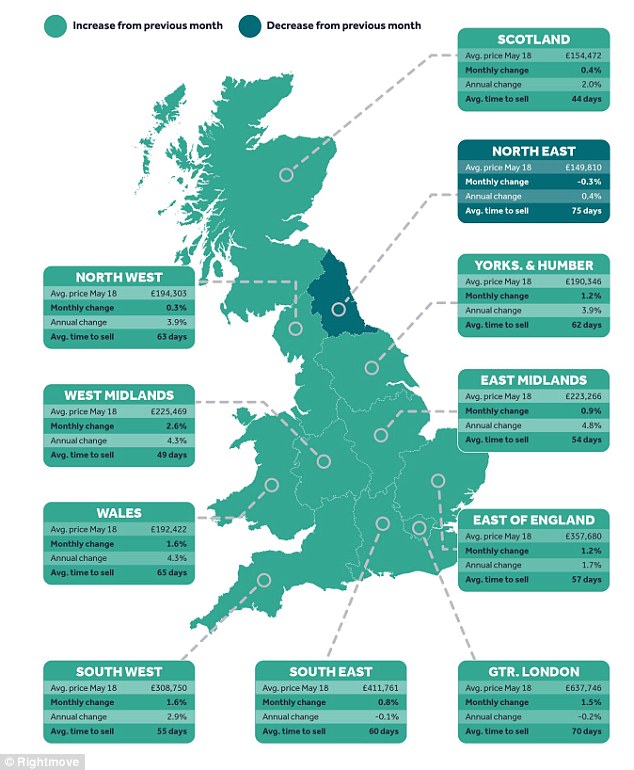 Property asking prices have come off the boil in London and the South East, with small annual falls, but are rising more strongly in Wales, the Midlands and the North

The average asking price is up just 1.1 per cent over the past year, said Rightmove, as the property market slows down.

But while asking prices in London and South East are marginally down on this time last year, slipping -0.2 per cent and -0.1 per cent, respectively, the East Midlands, West Midlands and Wales saw asking prices rise by more than 4 per cent.

Sales agreed by estate agents so far in 2018 are down 5.4 per cent on the same period last year.

London and the commuter belt have suffered the most from the decline in sales and it now takes more than two months to sell a home in the capital, with 70 days passing on average between properties coming to market and going under offer.

He added: ‘This is in spite of there being plenty of historically cheap mortgage products around for buyers who meet lenders’ criteria.

‘Sellers need to pitch their price at a tempting level to entice buyers, as while there are signs of strong demand there appears to be hesitation among some buyers to commit.’

Monthly growth in prices – which is more volatile – doubled  to 0.8 per cent in the four weeks to mid May, compared to 0.4 per cent in April.

Homes in the region took an average 54 days to sell – below the national average of 59 days.

The West Midlands and Wales followed with price growth of 4.3 per cent and faster markets, but while the former saw homes selling in about 49 days, sellers in the latter took an average of 65 days to find a buyer.

London and the South East saw prices fall by 0.1 per cent and 0.2 per cent respectively.

Sellers in these two regions also took much longer to find a buyer, with properties staying an average 70 and 60 days on the market respectively before being sold.

Mr Shipside said: ‘The last time the South East recorded an annual price fall was in 2011, indicating the softening in the London market is spreading to its commuter belt.’ 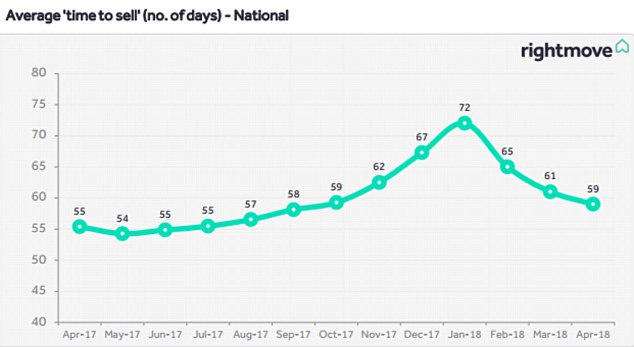 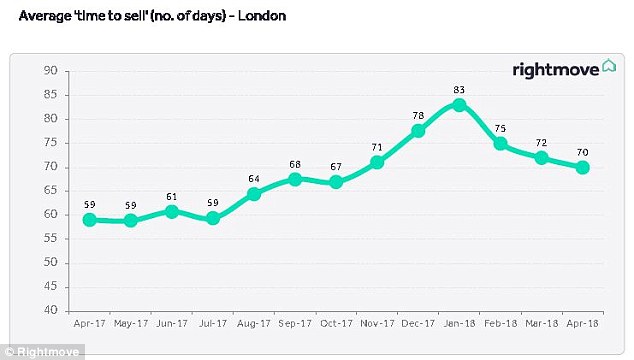 A separate report by LSL Property Services also out today paints a similar picture, with price declines in London and robust growth in the rest of England and Wales.

While it found that prices in some areas saw double-digit growth – North Somerset house prices rose by a whopping 13.6 per cent annually in April – it also concluded that the UK’s housing market has continued to slow down, with transactions down by a quarter year-on-year.

Brian Murphy, of the mortgage broker Mortgage Advice Bureau, said Rightmove’s data point towards a further widening of the gap between sellers’ expectations and what buyers can actually afford.

He said: ‘Just because there are few properties on the market in any one conurbation, that doesn’t necessarily mean that vendors are able to ambitiously price their property if they want to achieve an actual offer.

‘The fact that transaction levels appear to have dropped would perhaps evidence this.

‘It’s also reasonable to suggest that the ongoing lack of available properties for sale is a self-fuelling cycle, as if there is not a lot of choice for buyers who then can’t find what they are looking for, they simply don’t list their own property for sale, and so it goes on, bringing the market to a grinding halt as a result.’

Russell Quirk, of estate agent Emoov, said the latest housing market data was a further indication of a ‘fragmented market’.

‘While actual price growth is remaining somewhat static, over-optimism on the side of UK home sellers is continuing to push asking prices ever higher,’ he said.

‘This sentimentality is becoming a big problem and the widening gap between asking price and sold price will only result in a further decline in buyer interest and a continued market slowdown.’