The owner of Clydesdale and Yorkshire banks has made a £1.6billion takeover offer for Richard Branson’s Virgin Money, the challenger banks have confirmed today.

The deal means Virgin Money shareholders would own around 36.5 per cent of the new business. 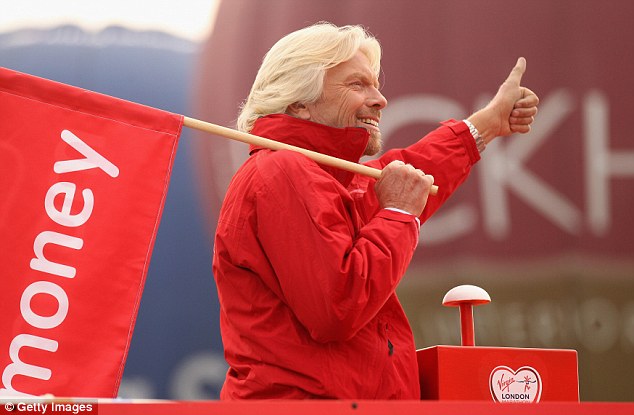 A takeover could mean a major payout for founder Sir Richard Branson, whose Virgin Group holds a controlling stake in the lender

The news boosted Virgin Money’s shares, which climbed 8.1 per cent to 337.7p, but had initially a negative effect on CYBG, which however bounced back, with shares up 1 per cent at 321.4p.

The deal could be the first of a series of takeovers among challenger banks as they try to take on their biggest peers.

News of the offer also sent shares in other smaller lenders higher. Onesavings, the owner of Kent Reliance, rose by 3.7 per cent to 410.2p, while Metro Bank shares rose 3 per cent to 3,342p.

A takeover could also mean a major payout for founder Sir Richard Branson, whose Virgin Group holds a controlling stake in the lender.

Virgin Money said it was considering the offer. A formal offer must be tabled no later than 5pm on June 4.

CYBG said the combination would create the ‘UK’s leading challenger bank offering both personal and SME customers a genuine alternative to the large incumbent banks’.

‘With this further strengthened customer franchise and national reach, CYBG believes the combination would deliver increased value for shareholders and wider benefits to other stakeholders,’ the group added.

Artjom Hatsaturjants, research analyst at Accendo Markets, said: ‘Unsurprising news from UK challenger banks this morning, as CYBG has made a £1.6B all-share takeover offer for Virgin Money (a 15% premium to VM’s market value).

‘The deal structure (i.e. full share, no cash, small premium) raises a question whether new financial upstarts, that sought to challenge the UK’s Big 4 banking titans, stand a chance to steal any meaningful market share within the gruelling financial sector environment on their own.’

However, he warned that there are likely to be hurdles to any tie-up.

‘While there is much logic in this combination and significant potential cost savings to be made, combining two banks is never a simple process.

‘The challenges of bringing together and integrating two IT systems in particular represents a significant challenge, one that will not doubt receive significant regulatory attention given the recent issues at TSB, where the migration onto Sabadell’s platform has been a disaster.’

He also added that regulators and politicians may also flag concerns that the deal combination removes a competitor from the market.