Visa has apologised after a system failure prevented card payments across the UK and Europe.

Card users hit out on social media last night as they were denied payment at pubs, supermarkets and shops and were forced to wait in long queues at cash machines.

The company said it ‘fell well short’ of its goal to ensure cards work reliably at all times, but assured customers this morning that Visa was operating at ‘full capacity’ again.

Drivers also faced difficulties getting into Wales because the card system was not working on the Severn Bridge, as the UK – where 95 per cent of debit cards run on Visa’s network – faced chaos on Friday night. 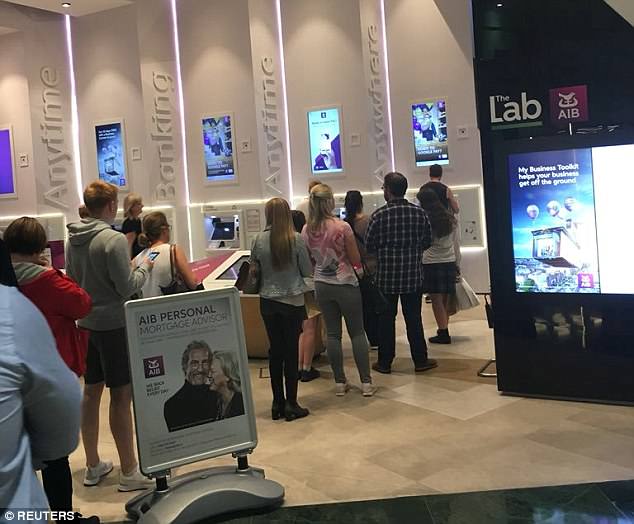 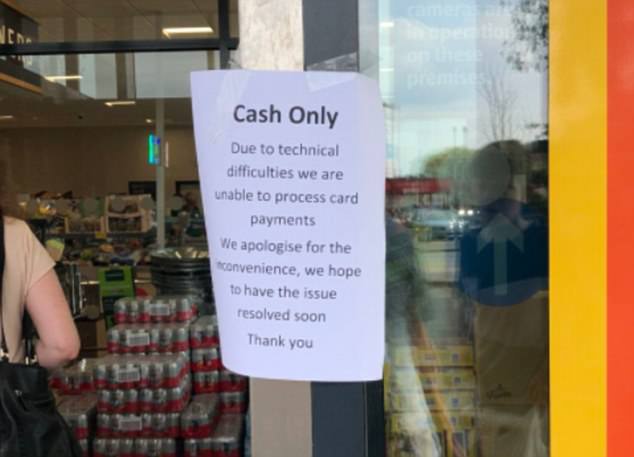 Social media users including John Homewood also complained of delays at the Severn Bridge. He said: ‘It looks like no-one can get into Wales’.

Sandra Foy, who owns a bookshop in Manchester, told Sky News: ‘I run a small business and the loss of any business is a big deal for us.

‘Not knowing when this is going to be sorted out is incredibly frustrating.’

The BBC posted a picture of a London supermarket worker standing outside holding a sign reading: ‘cash only’.

One customer, Anna, told MailOnline she had Visa payments at a bar and a food truck declined so switched to Google Pay, but later received a notification saying several card payments had gone through after all.

She said she had been at the Digbeth Dining Club in Birmingham with her boyfriend when they discovered the system was down, and was concerned she would not be refunded after paying for her orders twice.

Another MailOnline reader described a ‘very embarrassing’ experience in a pub when the bar server said the transaction for two drinks and some peanuts had not gone through.

And another supermarket shopper in Leeds said she was not told it was a nationwide Visa fault, with staff insisting there must be something wrong with her card.

One Twitter user called Rachel reported ‘chaos’ in an Aldi with long queues for cash machines while an Asda in Colchester had 40 people standing in line for money.

Some shops apparently had to resort to retro payment methods, with a Morrisons store manager posting a picture of an old-style card machine.

Elle Gibbs-Murray, from Bridgend in south Wales, said she was stuck in traffic on the Severn Bridge between England and Wales for 45 minutes as drivers were unable to pay the toll by card.

Ladies Day at Epsom was also disrupted as punters could not place bets, and some bars were even forced to closed because tills were not working, The Sun reported.

One woman from Oldham said she could not pay for drinks after work on a Friday, saying: ‘It’s worrying how everything can come crashing down like this’.

Chris Sheridan said he was unable to pay London’s congestion charge because of the Visa problem although Transport for London said customers would not be hit with a larger fee as a result. 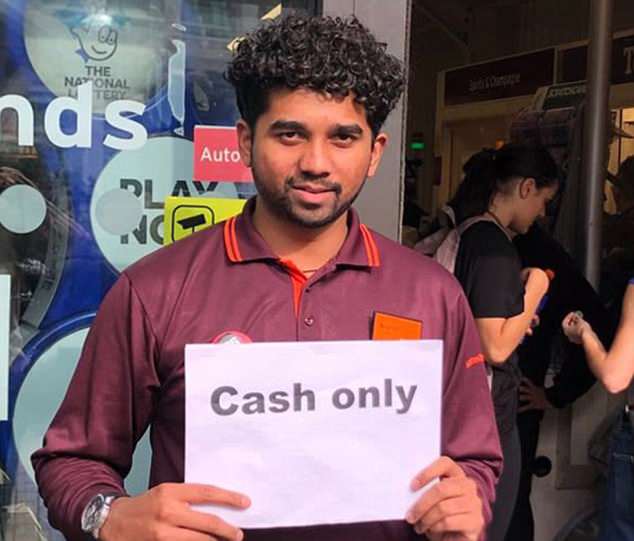 A Sainsbury’s employee in Vauxhall, London, held a sign saying the shop could only take cash 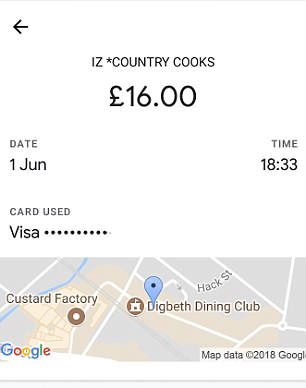 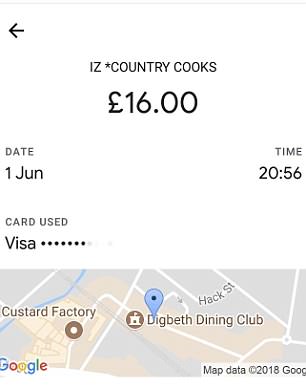 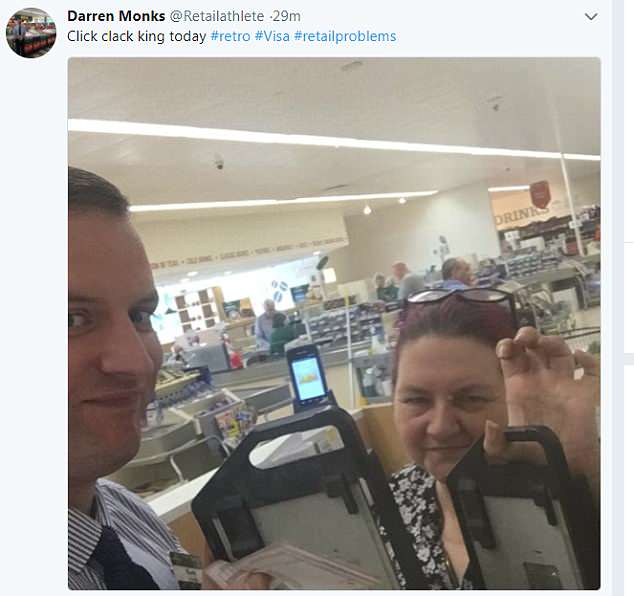 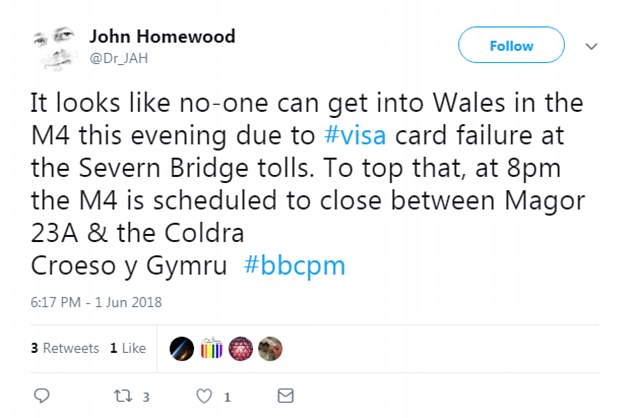 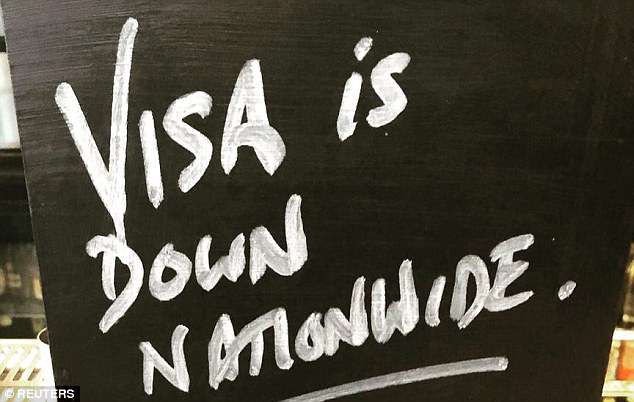 In a Primark store on Berlin’s Alexanderplatz, frustrated customers were queueing for 20 minutes to pay. Staff did not know why transactions were not going through.

However, in the neighbouring store, transactions were being processed without any problems.

Meanwhile a social media user called Jamie could not pay for drinks at a bar in Vienna because of the chaos – at which point a Visa advert appeared on a screen.

The issue was the result of a hardware failure and was not associated with any unauthorised access or cyber attack, Visa said.

Visa Europe posted a statement on its website in the early hours of Saturday to say the problems had been resolved.

It said: ‘Visa Europe’s payment system is now operating at full capacity, and Visa account holders can now use Visa for any of their purchases and at ATMs, as they normally would.’

It is understood the Bank of England was in touch with Visa about the problem.

A Visa spokesman had said on Friday night: ‘Earlier today, Visa had a system failure that impacted customers across Europe.

‘Our goal is to ensure all Visa cards work reliably 24 hours a day, 365 days a year.

‘We fell well short of this goal today and we apologise to all of our partners and, most especially, to Visa cardholders.

‘Visa cardholders can now use their Visa cards as we are currently operating at close to normal levels. 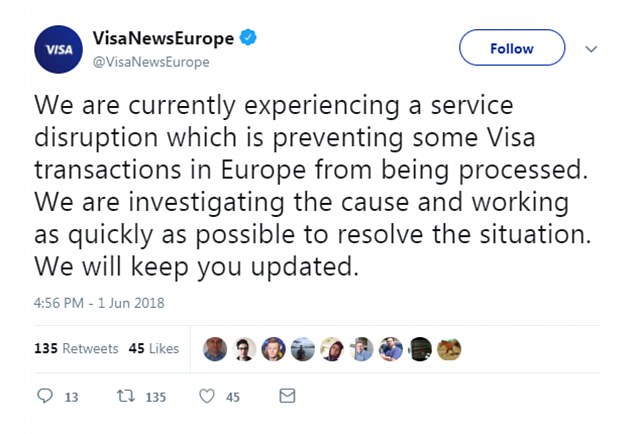 ‘The issue was the result of a hardware failure. We have no reason to believe this was associated with any unauthorised access or malicious event.’

‘From what we understand there are still intermittent issues but services are slowly recovering.’

Alex Neill, Which? managing director of home products and services, said the issue will have been a ‘huge inconvenience to customers’ and said Visa and the banks need to ensure no-one is left out of pocket.

‘We strongly advise people to keep any evidence of extra expenses they’ve incurred in order to claim them back,’ she said.

A Visa spokesman said the problem was not related to customers’ cards or accounts, but that there is a glitch in the authorisation process on the merchant’s side. 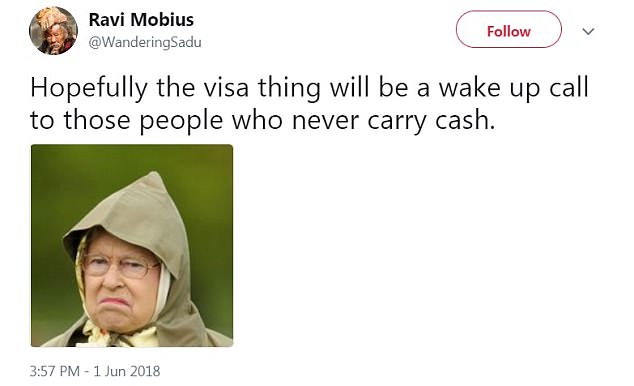 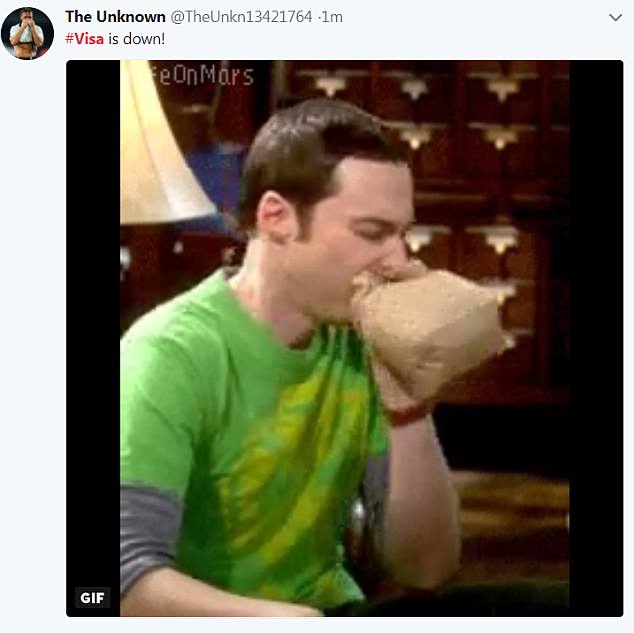