Britain could impose an ‘Amazon tax’ on internet giants to help save the UK’s high streets, Philip Hammond today said.

The internet giant sparked fury last week after it emerged its tax bill fell last year and it paid a meagre £1.7m – despite profits soaring and turnover hitting nearly £2billion.

Meanwhile, Britain’s high streets have faced a bloodbath with some of the country’s best known brands having to close down shops costing thousands of jobs.

House of Fraser this morning teetered on the brink of collapse and was calling in administrators before it was dramatically rescued by Sports Direct boss Mike Ashley.

Shortly after news of the rescue broke, the Chancellor said he backs EU moves to go after tech giants and make them pay their fair share of tax.

The Brussels bloc earlier this year unveiled plans to tax the revenues of internet firms like Amazon, Google and Facebook rather than profits, so they have to contribute to country’s where they do lots of business.

But Mr Hammond warned that if international efforts to overhaul rules fail then Britain will go it alone and impose its own measures.

Scroll down for video: 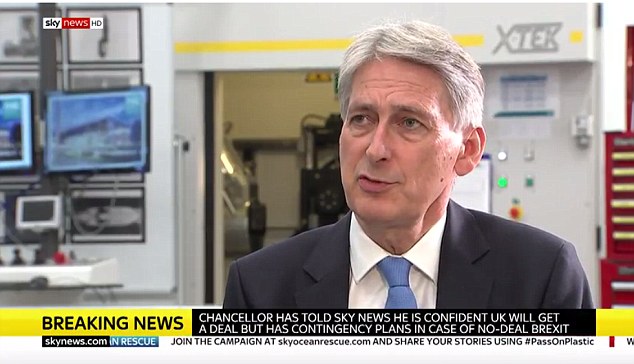 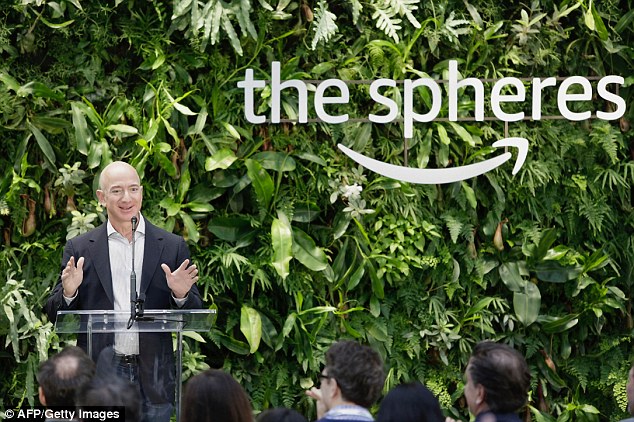 Chief Executive Officer of Amazon, Jeff Bezos (pictured at speaks at the grand opening of the Amazon Spheres, in Seattle, Washington in January) has faced a barrage of criticism for not making his company pay enough tax in the UK

He told Sky News:  ‘I want to ensure that the high street remains resilient and that we also make sure that taxation is fair between businesses doing business the traditional way and those doing business online.

Billionaire Mike Ashley bought parts of House of Fraser in a dramatic rescue deal this morning.

The well-known retailer announce this morning that it was calling in the administrators – putting 17,000 jobs at risk.

But the  Sports Direct boss swooped in to buy parts of it.

It remains unclear  how many jobs will be saved by the deal.

is reportedly plotting to buy it hours later.

Mr Ashley has previously said he dreamed of owning a UK department store.

House of Fraser was plunged into crisis after C.banner, the Chinese owner of Hamleys, pulled its investment into the troubled retail chain.

C.banner was planning to buy a 51 per cent stake in House of Fraser and plough £70million into the ailing retailer, but scrapped the move last week.

He added: ‘The European Union has been talking about a tax on online platform businesses based on the value generated.’

The EU has drawn up plans to fundamentally overhaul how internet giants are taxed to stop them squeezing out shops while paying just a fraction into the public purse.

Under the proposals, unveiled in March this year, the Brussels bloc will tax the revenues of internet firms like Amazon, Google and Facebook.

This is a radical shift from the current model which sees firms taxed on their profits where they book them – allowing companies to avoid paying big tax bills by moving money around their offices in different countries.

The EU believes that overall countries in the bloc will rake in an extra £5billion euros (the equivalent of £4.5bn).

In in interview with Five News, Mr Hammond said that Britain is leading these international efforts, but if they fail then he stands vready to go it alone.

He said: ‘Britain has led in this area and that’s an ongoing process that we attach very great importance to, and we have also said that if we don’t make sufficient progress in these international negotiations, we are prepared to consider short-term, temporary tax measures on online businesses, until we get those changes to the international agreements.’

It is not the first time Mr Hammond has hinted at his strong backing for the change, which he also mentioned in his Spring statement earlier this year.

Mr Hammond pointed out that Britons are changing their shopping habits and increasingly flocking to the web to pick up what they want.

How does Amazon currently get taxed and how would this change under the EU proposals?

Britain and several other major EU countries want to overhaul the way internet giants are taxed to make them pay their fair share.

Currently, companies like Amazon and Google are taxed like any other company – on how much profit they bank in each country.

But this means they can do huge amounts of business in the UK but wriggle out of paying tax in the country by moving and baking their profits in another of the countries it operates in with a lower tax threshold.

The EU has drawn up plans to fundamentally overhaul how internet giants are taxed to stop them squeezing out shops while paying just a fraction into the public purse.

Under the proposals, unveiled in March this year, the Brussels bloc will tax the revenues of internet firms like Amazon, Google and Facebook.

The EU believes that overall countries in the bloc will rake in an extra £5billion euros (the equivalent of £4.5bn).

He said: ‘More and more of us are buying online.

‘Indeed, Britain has the biggest percentage of online shopping of any major developed economy.

‘That means the high street will change.

‘We’re very clear that you have to support the high street through that process of change.

‘The nature of the offer on the high street is going to change over time. There’s going to be less retail, more leisure, bars, community facilities.’

But the company only paid £1.7 million in tax after deferring £2.9 million of that total.

That was despite pre-tax profits jumping to £72.4 million from £24.3 million in 2016, according to figures filed to Companies House.

An Amazon spokesman said: ‘We pay all taxes required in the UK and every country where we operate.

‘Corporation tax is based on profits, not revenues, and our profits have remained low given retail is a highly-competitive, low-margin business and our continued heavy investment.’

Decline of the High Street: The retailers struggling to stay afloat as online rivals take their customers

Toys R Us: The toy chain went into administration on the last day of February after failing to find a third-party buyer. In February, HMRC sought to recover £15 million in unpaid VAT and this finally tipped the company into administration.

Maplin: One of the UK’s biggest electronics retailers collapsed into administration on the same day as Toys R Us after talks with buyers failed to secure a sale. The business faced the slump in the pound after the Brexit vote, weak consumer confidence and a withdrawal of credit insurance.

Conviviality Retailing: The major drinks and off-licence supplier that owns Wine Rack and Bargain Booze went into administration in early April. The company had grown too quickly by merger, there were a series of profit warnings and a £30 million tax bill for which Conviviality was forced to ask for extra funds from investors – who refused.

Warren Evans: The bed, mattress and furniture retailers in London and the South East went into administration one week after putting itself up for sale. The retailer, known for its ethical stance, had been losing money for some time under the pressure of rising costs and shrinking customer spending.

Calvetron: The owner of Jacques Vert, Windsmoor, Dash and Eastex fashion brands that ran about 300 UK concessions in stores including Debenhams and House of Fraser, went into administration at the start of May. Bosses said inflation and wage freezes had been a driving force behind decreased spending.

Juice Corporation: The firm behind fashion brand Joe Bloggs and the retailer that designed the wedding dress for Diana, Princess of Wales, collapsed into administration in January. Although the group made profits, it had failed to make inroads into the fashion market.

Mothercare: The ailing baby goods and maternity retailer has proposed to close 50 stores as part of a planned turnaround for the company. It said losses were driven by the costs of 17 store closures last year, onerous leases and a head office restructure which resulted in 190 job cuts.

Carpetright: The embattled flooring firm is embarking on a store closure programme and has begun efforts to raise £60 million in emergency funding as it pushes through a restructuring after announcing it was expecting to book a full-year underlying pre-tax loss of between £7 million and £9 million.

Carluccio’s: The upmarket deli chain has unveiled a restructuring plan that will likely lead to 34 restaurant closures as it cited a combination of a gradual decline in consumer spending and increasing competition, coupled with the rising costs of labour, raw materials, rent and business rates.

New Look: The clothing chain announced earlier this year that it would close 60 UK stores and cut 1,000 jobs as part of a financial restructuring.