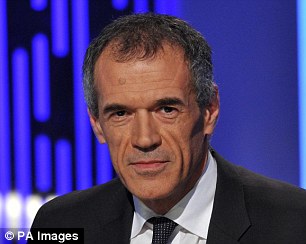 Shares in Italy tumbled and borrowing costs soared as the political crisis engulfing the country deepened.

The stock market in Milan closed more than 2 per cent lower on a dramatic day that paved the way for fresh elections.

Borrowing costs also rose, with the yield on ten-year government bonds approaching 2.7 per cent, the highest level for four years as investors fretted about the future.

It came as President Sergio Mattarella asked former International Monetary Fund official Carlo Cottarelli to be Prime Minister and form a government until new elections can be held.

Mattarella had rejected plans from the anti-establishment Five Star Movement and League parties for eurosceptic professor Paolo Savona to be economy minister.

The parties had tried to form a coalition after elections in March returned a hung parliament.

Mattarella said the occupant of the position should not be someone who ‘could provoke Italy’s exit from the EU’.