One of Britain’s biggest ports has been rocked by allegations of bullying and inappropriate behaviour by its boss.

The Dover Harbour Board, which has run the Port of Dover since 1606, has been sent a dossier of staff complaints about Tim Waggott.

According to Sky News, the allegations include the use of abusive language aimed at staff and members of the public.

The 51-year-old, who was appointed chief executive in 2013, has also been accused of making inappropriate physical and verbal gestures towards a number of female staff. 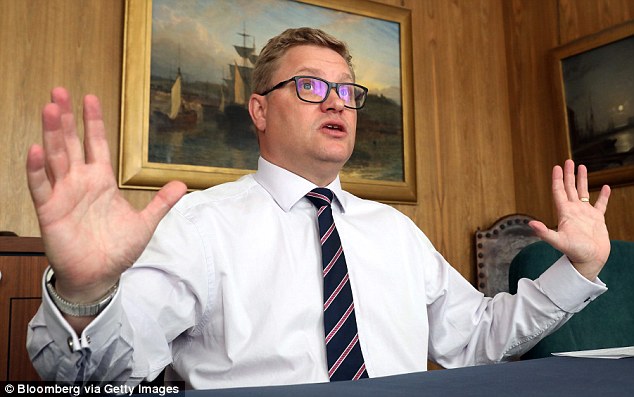 Storm: The Dover Harbour Board, which has run the Port of Dover since 1606, has been sent a dossier of complaints about boss Tim Waggott by members of staff

The claims have plunged Waggott’s future into doubt at a crucial time for the Port of Dover ahead of Brexit.

The town is Europe’s busiest ferry port and handles £119billion of goods every year, 17 per cent of the goods traded by the UK.

Ministers are pushing for a deal that will enable trade to be as frictionless as possible when the UK leaves the European Union.

Brexit secretary David Davis yesterday said he was confident an agreement on a transition phase with the EU post-Brexit can be reached within days.

He said the UK would accept a shorter transition period than initially suggested, saying he could ‘live with’ the arrangement ending in December 2020 rather than March 2021 if it helped secure ‘the close relationship we are seeking’.

This week Waggott said: ‘As the UK’s key maritime gateway to Europe, our largest trading partner, we remain convinced free-flowing trade and supply chains are imperative to the well-being of the many people whose jobs and livelihoods they support.’

The comments came as a report by Imperial College London warned that longer vehicle checks at the UK border post-Brexit would lead to huge queues on British motorways.

Waggott, who sits on the board of water regulator Ofwat and on the south east regional council of the CBI business lobby group, is still in his role at the port.

‘Tim Waggott remains in post as chief executive,’ a source said. But Richard Everitt, the chairman of the Dover Harbour Board, which reports to the Department for Transport, is weighing up how to deal with the allegations.

The dossier was compiled by Dakota Blue, a human resources consultancy in Kent that specialises in how firms treat their staff.

A Port of Dover spokesman said: ‘Dover Harbour Board acknowledges that following a detailed and independently managed staff engagement survey a number of issues came to light.

‘These are being worked through and so it would be inappropriate to provide further comment at this stage.’

‘Our work is confidential and we cannot confirm or deny our instruction on behalf of any particular client or the detail or outcomes of any of our work.’

She added: ‘We are therefore unable to provide any further comment at this time.’

A spokesman for the Department for Transport said: ‘This is an internal matter for Dover Harbour Board.’

Plans to privatise the Harbour Board were blocked by ministers in 2012.