Poundworld puts 5,300 jobs at risk as it sets to call in administrator

Poundworld is poised to announce its intention to appoint administrators, putting around 5,300 jobs at risk, reports claim.

It is understood that the discount chain is low on cash and is filing the notice because it will give the business protection from its creditors for up to two weeks.

Today’s announcement comes as Britain’s high street faces a crisis amid an onslaught from online rivals – and came on the same day that House of Fraser announced 6,000 of its employees are at risk of losing their jobs as it plans to close more than half of its stores in a bid to save the company. 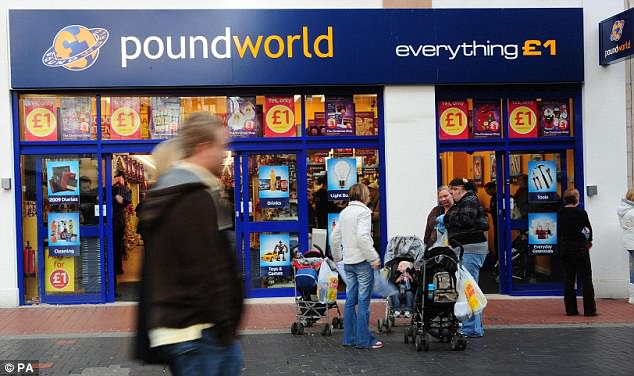 Poundworld is poised to announce its intention to appoint administrators, putting around 5,300 jobs at risk, reports claim

Sources told the Press Association that the planned notice will give Poundworld time to structure a pre-pack administration deal with private equity firm R Capital, former owner of Little Chef.

The administration will be handled by Poundworld’s advisers Deloitte.

Yesterday it was reported that the founder of Poundworld was putting together a rescue package to prevent its collapse after a potential buyer walked away from rescue talks.

Chris Edwards built the chain from a market stall and is understood to be mulling a bid to buy it back from private equity owner TPG Capital. 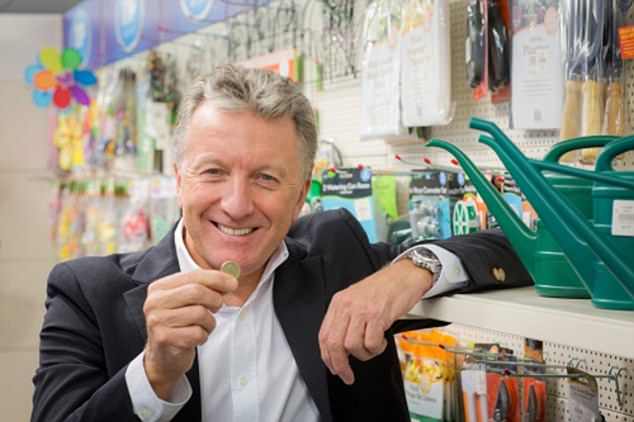 Chris Edwards, pictured, built the chain from a market stall and is understood to be mulling a bid to buy it back from private equity owner TPG Capital

Poundworld had previously rejected offers to sell through a pre-pack but all options are now being considered.

Management has so far failed to sell the retailer as a solvent business, after turnaround specialists Alteri Investors walked away from sales talks this week.

Deloitte has been preparing contingency plans for an administration in the event of talks collapsing.

Poundworld’s losses widened in 2016-17 to £17.1 million, from £5.4 million of losses the year before. The retailer was hit with a £5.7 million charge for onerous leases, a provision retailers make when the cost of a lease is no longer covered by the income of the store.

It has been a swift fall from grace. In 2015 Poundworld revealed record annual sales and profits alongside plans to continue its rapid expansion by opening 60 new stores in 2016. That year the major competitor to Poundland said sales jumped 22 per cent to £422.3million to the year finishing end of March.

Over the period it opened 38 stores, with like-for-like sales up 5.6 per cent. The group, which runs 295 stores across the country, added that operating profits also hit a record, more than doubling by 130 per cent to £14.6million.

Several retailers have shown significant financial distress this year, with both Maplin and Toys R Us disappearing from the high street.

HOUSE OF FRASER’S CHINESE OWNERS WILL CLOSE 31 OF ITS 59 STORES ACROSS UK AND IRELAND PUTTING 6,000 JOBS AT RISK IN YET ANOTHER BLOW TO THE HIGH STREET

House of Fraser has announced 6,000 of its employees are at risk of losing their jobs as it plans to close more than half of its stores in a bid to save the company.

The retailer today announced plans to shut 31 of its 59 stores across the UK and Ireland as part of a rescue deal which would allow it to keep some of its smaller branches trading.

Some of the 6,000 staff now expected to lose their jobs only found out about the closures this morning when they saw the news online – and many remain unsure of their immediate future at the company following the shock announcement.

The announcement comes as Britain’s high street faces a crisis amid an onslaught from online rivals.

House of Fraser stores affected by  the plans include its flagship on London’s Oxford Street and branches in Edinburgh, Birmingham and Milton Keynes – while Wales will be left with no remaining stores as both the Cardiff and Cwmbran branches are primed for closure. 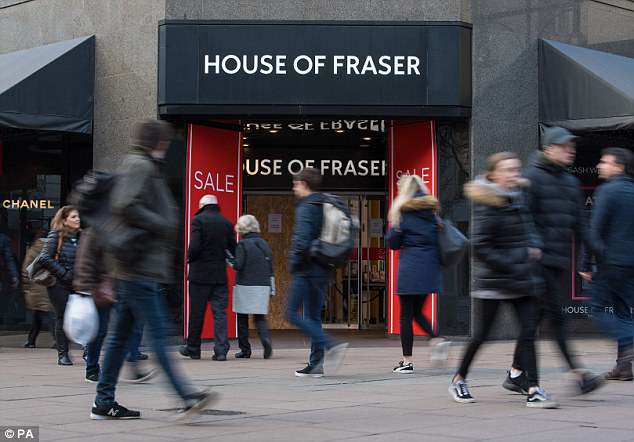 Embattled department store chain House of Fraser is closing more than half of its stores in a bid to save the company – putting 6,000 jobs at risk (Pictured: The flagship store on London’s Oxford Street which is set to close)

The company was bought by Chinese firm Sanpower for £480million in 2014.

The firm is understood to have agreed a restructuring plan which will see all but its most modern stores, and those in large shopping centres, close.

House of Fraser said the planned closures, which include its flagship Oxford Street store, come as part of a company voluntary arrangement (CVA) – a controversial insolvency procedure in vogue among struggling retailers.

The retailer is also asking for a 25 per cent rent cut on 10 of the stores that it plans to keep open.

Landlords, who must vote through the plan, have already expressed serious concerns about the proposals and met on Tuesday to discuss how to respond to House of Fraser. 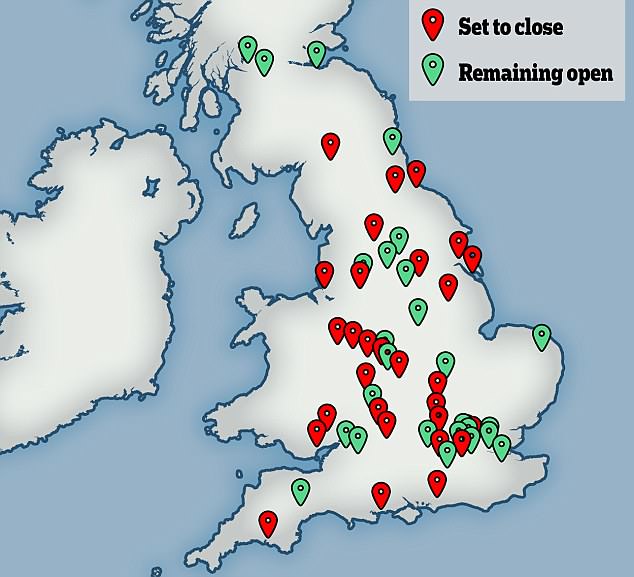 At least 75 per cent of creditor approval is needed, with the vote set to take place on June 22.

If the CVA is approved by landlords, it will affect up to 2,000 House of Fraser staff and a further 4,000 across brands and concessions.

House of Fraser said the shops earmarked for closure would remain open until early 2019. 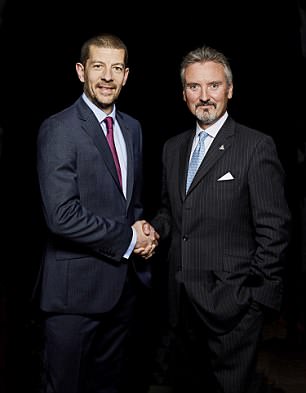 The group said it also plans to relocate its Baker Street head office and the Granite House office in Glasgow to help slash costs and ‘secure House of Fraser’s future’.

House of Fraser stressed that the group will continue to trade ‘as normal’ online and through stores ahead of the CVA vote and throughout the proposal.

Patrick O’ Brien UK Research Director at GlobalData Retail tweeted that rival Marks and Spencer is set to gain the most from the closures.

In piece on Verdict reports that ‘shoppers who buy clothes from House of Fraser are more likely to also shop at M&S for clothes than any other retailer and so has the best opportunity to gain market share, followed by Debenhams.’

The announcement comes as Britain’s high street faces a crisis amid an onslaught from online rivals.

This Is Money reports it is predicted more than 10,000 shops will disappear this year – the most in a decade.

Toys R Us and Maplin have collapsed into administration and Marks & Spencer, Mothercare, Carpetright and New Look are all closing shops. Analysts warned the crisis is likely to continue.

Alex Williamson, chief executive of House of Fraser, said: ‘Today’s announcement is one of the most important in this company’s 169-year history.

‘We, as a management team, have a responsibility to take necessary steps to ensure House of Fraser’s survival, which is why we are making these proposals.

‘We are fully committed to supporting those personally affected by the proposals.’

Which House of Fraser stores will close and which will remain open?

Two further shops are excluded from the proposals as they are separate legal entities: Dublin Dundrum and Solihull (Beatties)

House of Fraser’s move to shut down more than half of its stores comes amid turmoil on the high street, with multiple retailers falling into administration or announcing restructuring plans since the start of the year.

Experts say that a combination of online competitors, increasing business rates and rising import prices are leaving high street giants who have traditionally been seen as untouchable struggling to survive.

Here  MailOnline looks at the changes high street retailers have recently made:

– Marks & Spencer: Late last month, the high street stalwart reported a 62.1% fall in pre-tax profit to £66.8 million in the year to March 31 as it was dragged down by £321.1 million in costs linked to store closures.

The results came a day after M&S said it will shut more than 100 outlets by 2022 as it accelerates a transformation programme that will see thousands of jobs put at risk.

– Toys R Us: The toy chain went into administration on the last day of February after failing to find a third-party buyer. In February, HMRC sought to recover £15 million in unpaid VAT and this finally tipped the company into administration.

– Maplin: One of the UK’s biggest electronics retailers collapsed into administration on the same day as Toys R Us after talks with buyers failed to secure a sale. The business faced the slump in the pound after the Brexit vote, weak consumer confidence and a withdrawal of credit insurance. 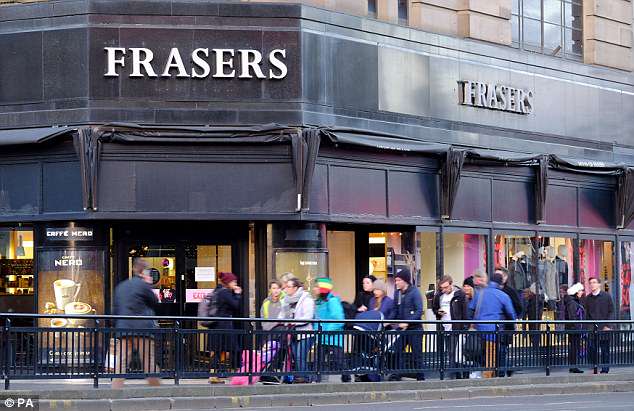 – Conviviality Retailing: The major drinks and off-licence supplier that owns Wine Rack and Bargain Booze went into administration in early April. The company had grown too quickly by merger, there were a series of profit warnings and a £30 million tax bill for which Conviviality was forced to ask for extra funds from investors – who refused.

– Warren Evans: The bed, mattress and furniture retailers in London and the South East went into administration one week after putting itself up for sale. The retailer, known for its ethical stance, had been losing money for some time under the pressure of rising costs and shrinking customer spending.

– Calvetron: The owner of Jacques Vert, Windsmoor, Dash and Eastex fashion brands that ran about 300 UK concessions in stores including Debenhams and House of Fraser, went into administration at the start of May. Bosses said inflation and wage freezes had been a driving force behind decreased spending.

– Juice Corporation: The firm behind fashion brand Joe Bloggs and the retailer that designed the wedding dress for Diana, Princess of Wales, collapsed into administration in January. Although the group made profits, it had failed to make inroads into the fashion market.

– Mothercare: The ailing baby goods and maternity retailer has proposed to close 50 stores as part of a planned turnaround for the company. It said losses were driven by the costs of 17 store closures last year, onerous leases and a head office restructure which resulted in 190 job cuts.

– Carpetright: The embattled flooring firm is embarking on a store closure programme and has begun efforts to raise £60 million in emergency funding as it pushes through a restructuring after announcing it was expecting to book a full-year underlying pre-tax loss of between £7 million and £9 million.

– Carluccio’s: The upmarket deli chain has unveiled a restructuring plan that will likely lead to 34 restaurant closures as it cited a combination of a gradual decline in consumer spending and increasing competition, coupled with the rising costs of labour, raw materials, rent and business rates.

– New Look: The clothing chain announced earlier this year that it would close 60 UK stores and cut 1,000 jobs as part of a financial restructuring.