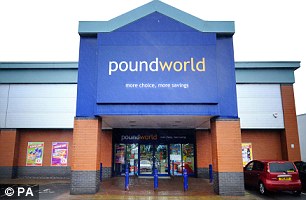 Poundworld is shutting a further 40 stores and axing 531 jobs

Poundworld is shutting a further 40 stores and axing 531 jobs as it teeters on the brink of disappearing from the High Street.

The bargain retailer went bust last month but administrators have been unable to find a buyer.

Before it collapsed, Poundworld employed 5,100 staff and had 355 stores. Earlier this month, it said 105 shops would shut, threatening 1,200 jobs.

Around 100 staff at Poundworld’s head office in Normanton, West Yorkshire, have also been made redundant.

Administrator Deloitte said discussions to sell part or parts of the remaining business were still ongoing.