Pressure on families eases as inflation rate FALLS to 2.7 per cent

The pressure on families has eased after inflation fell back for the first time since December.

The bigger-than-expected fall – led by reductions in food and transport costs – suggests the rate has peaked from its high of 3 per cent last year. 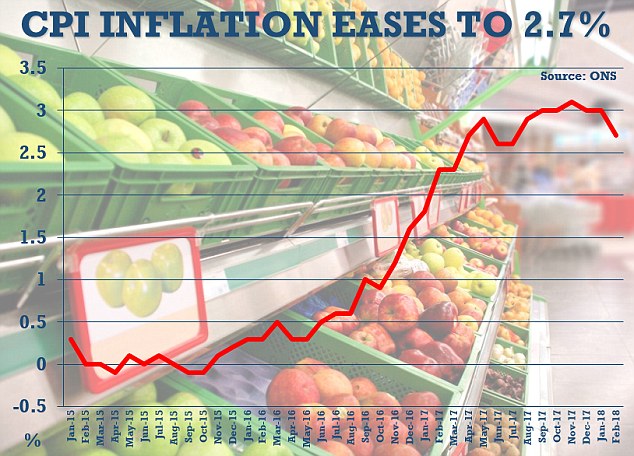 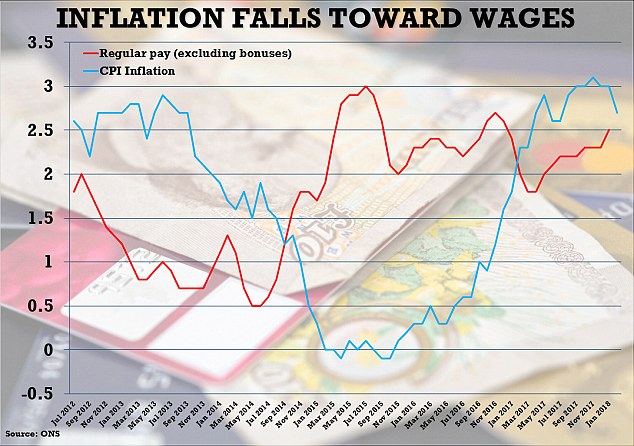 It will also lessen the pressure on Bank of England governor Mark Carney to increase interest rates.

However, the inflation rate is still running above average wage rises – which were around 2 per cent in January.

Phil Gooding of the ONS said: ‘A small fall in petrol prices alongside food prices rising more slowly than last year helped pull down inflation, as many of the early 2017 price increases due to the previous depreciation of the pound have started to work through the system.

‘Hotel prices also fell and the cost of ferry tickets rose more slowly than last year, when prices were collected on Valentine’s Day when many people could have been taking mini-breaks.’

Treasury minister Mel Stride said: ‘We know families feel the cost of living at the end of every working week.

‘From next month a typical taxpayer will pay £1,000 less income tax than in 2010. And we are increasing the National Living Wage which is already helping the lowest earners see their pay rise by almost 7 per cent above inflation.

‘This is part of our plan to build an economy that works for everyone.’

Food prices were also applying downward pressure, lifting 0.1 per cent between January and February in contrast to a 0.8 per cent rise the year before.

The fall in food prices was partly down to a shortage of salad and vegetables last year when bad weather hit crops in southern Mediterranean countries, the ONS said.

The main upward pressure on the cost of living came from clothing and footwear prices, which rose by 1.7 per cent on the month – compared to 1.2% in 2017 – as women’s shoes became more expensive.

The Bank believes inflation’s upward march has run its course and will start to unwind over the coming months.

It is widely expected to keep interest rates on hold at at 0.5 per cent on Thursday, but the meeting will be watched closely amid expectations over another hike in May.

Mr Carney has already warned borrowers that rates will need to rise ‘somewhat earlier and by a somewhat greater degree’ to get inflation back on target after stronger-than-expected growth in the economy. 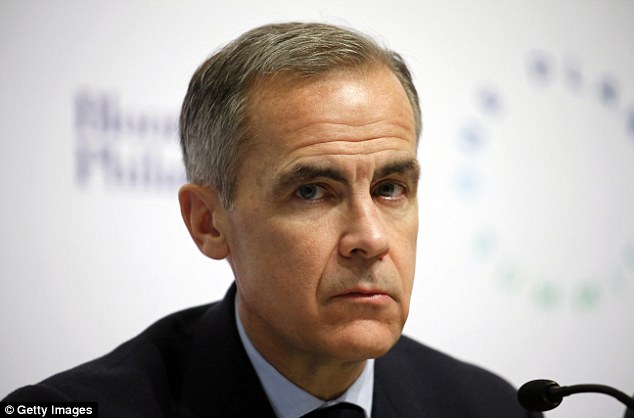 It comes after the Office for Budget Responsibility hiked its outlook for economic growth this year, to 1.5 per cent, from 1.4 per cent previously predicted, in its Spring Statement forecasts.

It also said it believed inflation would fall back to the Bank’s 2 per cent target this year.

The Bank is more upbeat on the growth outlook, pencilling in 1.8 per cent expansion this year, although it is not so cheery on the path of inflation.

It said in its February report that rising oil prices would keep inflation above 3 per cent in the short-term and see it take longer to return to target.