Primark is gearing up to knock Marks & Spencer off pole position as the UK’s biggest selling clothes retailer, in what would be a landmark moment for the High Street.

The budget chain has seen its market share soar in recent years, while arch-rival M&S has been hammered.

Figures from analysts at Global Data suggest M&S’s market share by the end of 2018 will be 7.6 per cent, while Primark’s will be 7 per cent.

Primark sales are growing rapidly while M&S – due to report its latest results today – are declining. At this pace it could see Primark overtake M&S as early as next year. 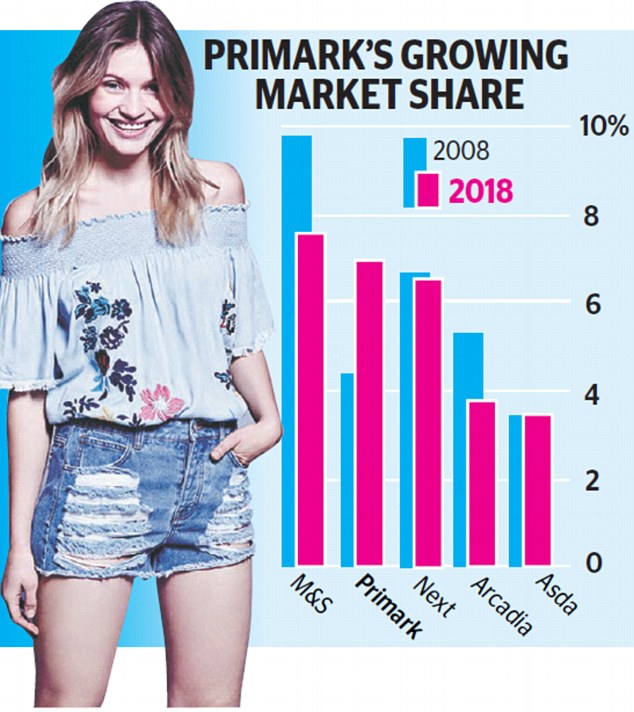 According to annual reports, Primark made £7billion sales last year, up more than £1billion on the previous year. Of its 345 shops, 182 are in the UK.

M&S, which was founded in 1884, has seen its market share in clothing halve by value in just two decades.

But while the crisis gripping the High Street forces retailers to close hundreds of shops, Primark is opening more – next month it will create 500 jobs with a store in west London.

Meanwhile M&S is ramping up its closure programme with plans to shut 100 stores by 2022 – 40 more than previously announced.

Maureen Hinton, group retail research director at Global Data, said M&S is in danger of losing its dominant position in the clothing market.

She added: ‘Marks & Spencer has dominated the market for decades, but its lead as number one is perilously close to being lost to Primark.

‘The closure of yet more stores will hasten the decline unless it can shift the lost sales to its online channel and transfer to its other stores.

‘But it also has to start growing total non-food sales to stem the overall decline.’

Over the past decade, M&S has lost 2.2 per cent of its market share as it tried to keep up with changing tastes and shopping habits.

Of the top 20 retailers in the UK, only Philip Green’s Arcadia Group has lost more share, down 3.1 per cent, after it sold the BHS chain.

David Buik, an analyst at Core Spreads, said: ‘Retail does look dire in the UK, but it is the dynamics that have changed. The consumer is looking for much more of a bang for their buck.

‘M&S has spent most of the past decade surrendering ground to the likes of Primark, Boohoo, H&M, Zara and even Next. M&S’s fashions are desperately dowdy and have little appeal to the young, who are very savvy and price conscious.’

Analysts are preparing for M&S to announce another drop in profits today, which could see it crash out of the FTSE 100.