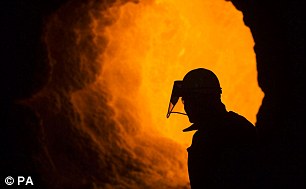 The private equity firm that rescued British Steel for a symbolic £1 has raked in £6million from the firm in management fees.

The Greybull partners do not receive any pay from British Steel on top of the management fees.

Nor have dividends been paid out.

Greybull rescued the company from Tata during the depths of the steel crisis in 2016, returning it to profit one year later.

Staff had to take a pay cut during a restructuring but they were given a 5 per cent stake in the firm.