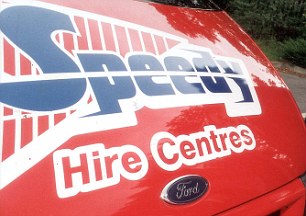 Booming: Speedy Hire said it was predicting a boost to both revenues and profits

Speedy Hire shares jumped 8 per cent after it said it was expecting higher earnings despite the collapse of major client Carillion.

The tools and equipment hire company said it was predicting a boost to both revenues and profits for the year to March 31, having reduced its fleet and seen its recent acquisitions perform in line with expectations.

The news immediately boosted Speedy Hire’s shares and they closed up 8 per cent, or 3.9p, at 52.2p.

Speedy had been a supplier of hire equipment and services to infrastructure giant Carillion, which collapsed in January.

Speedy – which is set to release its full-year earnings on May 16 – said net debt was likely to come in at around £80million after spending £23million on acquisitions.

Despite the upbeat profit announcement, Liberum was maintaining its forecasts for Speedy.

‘Given the broader market uncertainty, we believe it prudent to leave our estimates for 2019 and beyond unchanged,’ said Liberum analysts Rahim Karim and Joe Brent.