Home is where the heart is. It can also be used as a way in which to earn you extra cash. Here, The Mail on Sunday shows how you can profit from your property – from turning it into a TV set to swapping it for a holiday.

TURN YOUR HOME INTO A MOVIE SET

You do not need to live in a Hollywood mansion on Sunset Boulevard to get your house into the movies. A modest suburban home can do.

Homeowners often get paid £2,500 a day for letting out their property to be used for a movie, TV show or advert. If used for a photoshoot in a magazine feature or for marketing purposes it might generate £500. 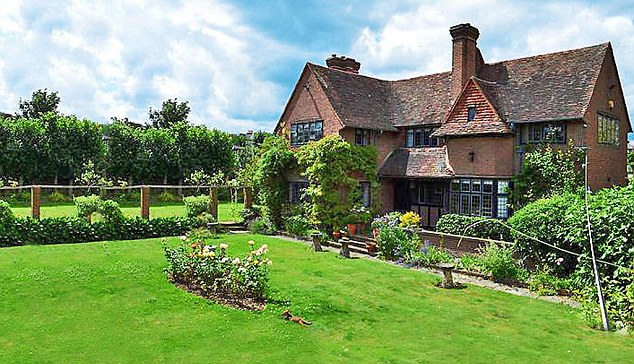 Star role: The Shaws’ home in East Dulwich was used for the drama A Very English Scandal starring Hugh Grant and Ben Whishaw

It is period authenticity that film crews usually most desire. Janie Richardson, of property agency Lavish Locations, says: ‘The biggest appeal is if the property has been untouched by time – and so has a feel of the period in which a film is set.’

She points to the recent TV series A Very English Scandal starring Hugh Grant as Liberal leader Jeremy Thorpe. It used a home in East Dulwich, South East London, found by the agency.

Jean and Alan Shaw have owned the five-bedroom 1917 house featured as the Thorpe family home since they moved there in 1970. The couple, both aged 80, believe the property was chosen because of its particularly special period appeal – having been built using Elizabethan bricks.

Jean says: ‘It was surprisingly easy to cope with the film crew as fortunately we were able to still sleep in our beds at night. Most of the furniture was removed and the interior was wallpapered to give it a dated appeal. 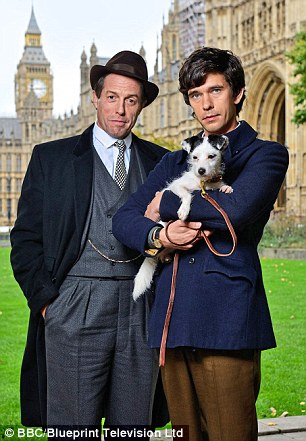 ‘Dozens of people were here for a week – but filming was done in just two days. After finishing, everything was put back exactly as it was while the piano was even retuned. They paid for our own decorators to get the house back into shape.’

Richardson says there are practical considerations to be made before giving your home a starring role. This includes having access and space outside for large vehicles that can accommodate at least three dozen crew. You should also not be precious about furniture being moved.

Any breakages or damage will be covered by film crew insurance though you should tell your own home insurer what is going on. Low ceilings and small rooms can be a problem because lighting and sound equipment often needs plenty of out-of-shot space. Agencies such as Lavish Locations can take a 20 per cent cut of any fees paid. Others to consider include Amazing Space and House of Locations.

RENT OUT A ROOM

The taxman is surprisingly generous for those who have a spare room they might consider letting out – allowing up to £7,500 a year to be received tax-free. This ‘rent-a-room’ allowance is not just for homeowners who share furnished accommodation but also for those who live in rented accommodation and who wish to sub-let.

Income from short-term letting arranged via websites such as Airbnb can also be protected from tax by use of this allowance. Carlo Bongiovanni rents a two-bedroom apartment on the riverside in Vauxhall, South West London, paying £1,900 a month for his accommodation. The 26-year-old estate agent lets out one of the rooms for £39 to £49 a night depending on the time of year. He markets the flat through Airbnb.

He says: ‘Renting out a room is not easy money. It is important to ensure the property is always kept in immaculate condition and you must be as helpful as you can to visitors to ensure they have the best possible experience. 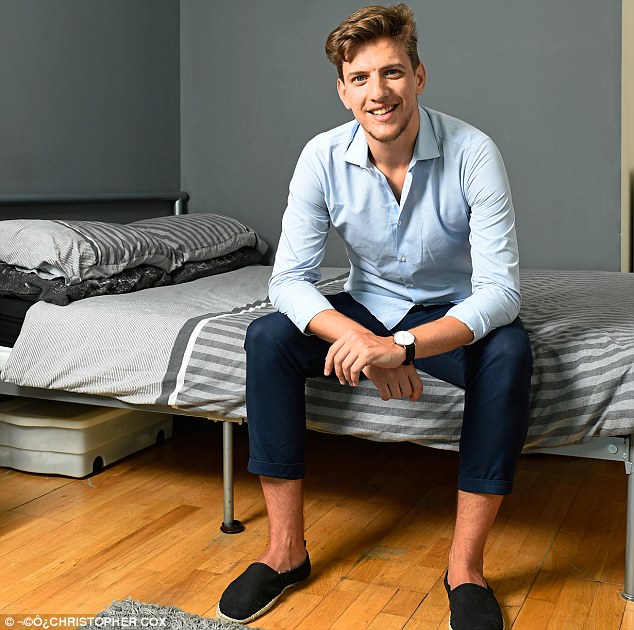 Room for profit: Carlo Bongiovanni rents a two-bedroom apartment on the riverside in Vauxhall, South West London, paying £1,900 a month for his accommodation

‘But the extra money comes in really handy as living in London is expensive. Without it I would struggle.’

Airbnb charges a 3 per cent fee to those renting out a property as well as a ‘guest service fee’ for those staying of between 6 and 12 per cent of the rental charge. Included in this price is a ‘host guarantee’ paying up to £600,000 for damage caused by guests. But also ensure your home and contents insurer is aware that you are renting out.

Payment for those booking via Airbnb is taken directly via PayPal or debit or credit card – with money released to the host 24 hours after guests book in. Carlo says: ‘I pay a cleaner £20 before each new guest comes in to ensure the property is kept in tip- top condition – a cost that I must factor into my financial sums. It is also vital to make sure the home is always secure.’

Other specialist websites to consider include SpareRoom. This allows you to promote accommodation on its website for free – or from £10.99 for a week if you want your advert to stand out. Lodgers do not sign short-term leasehold agreements as they would renting an entire home but contracts where details such as the policy on breakages and keeping the house in order are provided. SpareRoom sells lodger agreements for £7.50.

Matt Hutchinson, of SpareRoom, says: ‘We believe there are 19 million spare rooms in England alone. The rent they generate can make all the difference between struggling to get by and enjoying a comfortable life.’

For those who do not like the idea of opening up their home to strangers an alternative is to use your property to store other people’s items. Specialist websites include Storemates and Storenextdoor. Storemates takes a 15 per cent cut of the storage charge – this includes insurance damage cover of up to £10,000 on goods being kept.

Storenextdoor offers a similar deal for those that also want a contract and insurance as part of the deal.

SWAP YOUR HOUSE FOR A HOLIDAY

Holidaymakers can save a fortune by enjoying free accommodation abroad if they are willing to swap their home with someone else. Properties do not have to be similar and the appeal is often more about the convenience of the location.

Caroline Connolly is director of house swap agency HomeLink UK. Last year, she and husband Jon, 52, and their four children, Lara, 14, Sasha, 12, and 11-year-old twins Felix and Oscar, swapped their Hampshire family home for a five-bedroom property in the Canadian city of Vancouver. 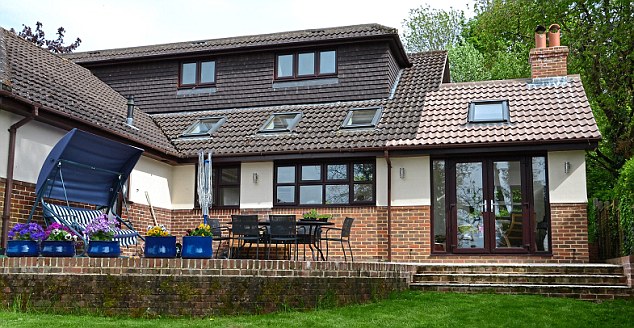 Ideal: Last year, the Connolly family swapped their Hampshire family home (pictured above) for a five-bedroom property in the Canadian city of Vancouver 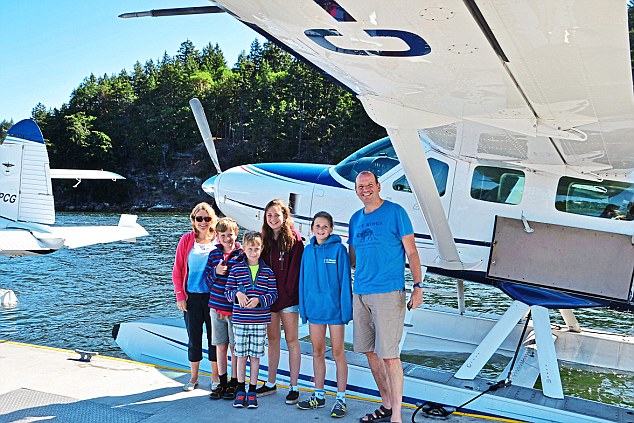 Treat: The Connolly family on holiday in Vancouver

The 50-year-old says: ‘We would never have been able to afford such an incredible holiday destination without a house swap. Savings we made on our fabulous accommodation also enabled us to enjoy extra luxuries – a flight across Vancouver Island, a trip to Seattle in the United States plus a couple of days walking in the mountains near Whistler.’

The family were even given use of a people carrier car provided for free as part of the swap. In return they paid an additional £30 for their motor insurance back in England to allow the two female guests they were exchanging with to use their car.

Caroline says: ‘We have a large family home in Winchester. The couple loved it as a base to soak up the English atmosphere. The area is great for cream teas and pub lunches as well as cultural highlights such as where Jane Austen and the poet Keats once lived. Visiting Highclere Castle – better known as Downton Abbey – which is about 20 miles away was one of their highlights.’ 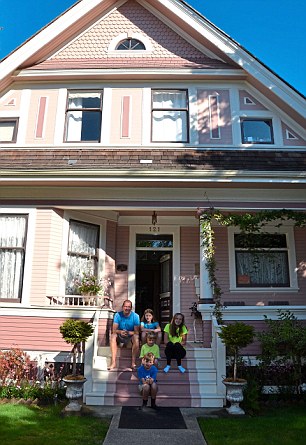 House swapping works best if you are open-minded and flexible. Trust is also a major part in the exchange being a success and although you do not need to leave your property looking like a show home, it should be clean and welcoming.

When putting a property on a home-swapping website, honest photos are vital. Properties do not have to be alike and it may be possible to trade so you can visit at different times – perhaps staying with family or friends on their visit.

House swap companies usually charge from about £100 a year for the service. This price includes a shop window of potential house swaps and rules in case there might be any disputes. Providers include HomeLink UK, Love Home Swap, HomeExchange and Home Base Holidays.