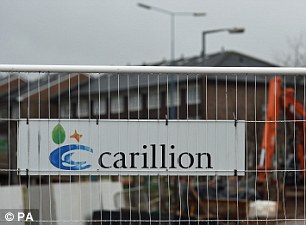 The bean-counters hired to wind up bust builder Carillion have been paid £20.5million for eight weeks work – or roughly £500,000 per day.

Accountancy firm PwC has been charging an average £360 per hour for each worker on the case since mid-January and has around 112 staff working on Carillion, a cost of on average £12,500 per week per worker.

Bosses revealed the sums to MPs on the business, energy and industrial strategy committee.

PwC also advised the Government on Carillion in the run-up to its collapse, and the pension trustee, raising questions about conflicts of interest.

Carillion collapsed in mid-January with debts of more than £3billion, costing 19,500 jobs.

Labour MP Frank Field said ahead of the hearing: ‘[PwC] claim to be experts in every aspects of company management. They’re certainly expert in ensuring they get their cut at every stage.’