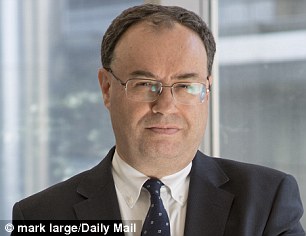 Ambitions: Is FCA boss Andrew Bailey vying for the top job at the Bank of England?

Are we to assume the race to be the next Bank of England Governor is officially under way?

Vodafone’s outgoing boss, chirpy Italiano Vittorio Colao, 56, completed his final conference call with journalists yesterday, remarking: ‘Thank you, it’s been a pleasure working with you all these years.

‘I wish you all the best for the future.’ Will BT’s departing Gavin Patterson be so generous when he signs off? Like golfer Nick Faldo, he may be more inclined to thank us from the heart of his bottom.

The Glorious Twelfth sees peony-cheeked City grandees head oop north for the start of grouse shooting. Not this year, however.

I hear a number of moors have delayed the traditional August 12 curtain-raiser, while some have cancelled the season.

A combination of the ‘Beast from the East’ cold snap followed by the scorching weather has played havoc with breeding. How’s grouse moor habitue Crispin Odey going to cope?

So what do Presidents Club trustees make of the hospital splurging £130,000 on pricey libel lawyers Schillings to respond to an ITV investigation into its work practices?

Perhaps it’s their turn to take the moral high ground and ask for their donation back.

Next week’s hippie drippy Wilderness Festival on Oxfordshire’s Cornbury estate hosts ‘Spooning Hour’, where attendees lie down each evening in a circle and ‘spoon’ one another. Relieves tension, they say.