But as one of the first journalists in the world to put the firm’s new I-Pace sports utility vehicle fully through its paces – on the road, on the race-track and with some mild off-roading in Southern Portugal – I can tell you that the performance of this Jaguar really is electric.

And that’s not just because this new ‘green’ all-wheel-drive battery-powered 21st century leaping cat – priced with batteries included from under £60,000 – is unique in being the first to be powered purely by electricity. 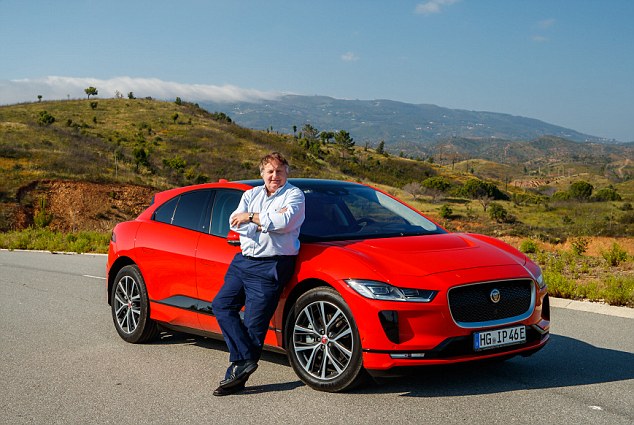 Acceleration is rocket-like, instantaneous, and lightning fast – cracking from rest to 60mph in just 4.5 seconds up to a top speed of 124mph. You very quickly forget it’s an electric car.

But it still promises a claimed range of 298 miles – or enough to get from London to Newcastle – on one overnight charge.

Jaguar bosses said they ‘tore up the rule book’ when creating the I-PACE which was developed over four and a half years by a crack core team who relocated from Jaguar’s main research, design and engineering centres at Whitley in Coventry and Gaydon in Warwickshire and worked off-site at Warwick University which has established itself firmly as the foremost advanced automotive centre in the UK. 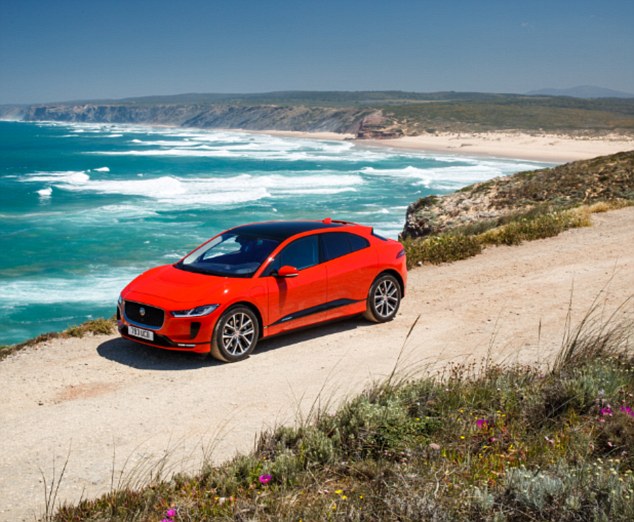 The iPace is priced with batteries included from under £60,000 – it is the first Jaguar to be powered purely by electricity 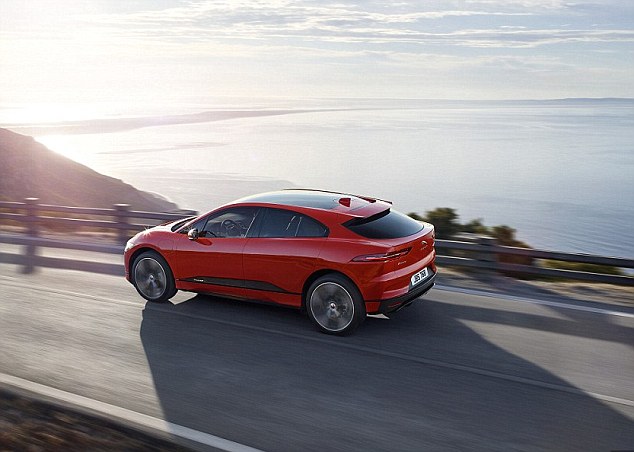 quick: The Jaguar goers from rest to 60mph in just 4.5 seconds up to a top speed of 124mph 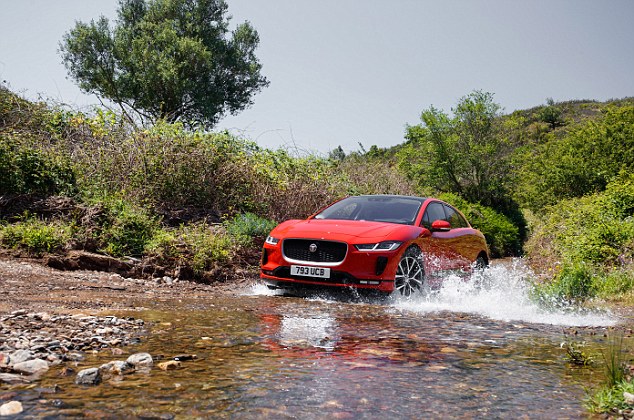 The iPace promises a claimed range of 298 miles – or enough to get from London to Newcastle – on one overnight charge.

Stylistically, this spacious and comfortable five-seater with plenty of room in the boot for luggage, looks like a proper car that would sit well in any driveway.

It’s a blend of sporting prowess, SUV practicality and family saloon or hatchback comfort. The absence of a conventional engine creates a large flat floor above the battery and means Jaguar designers could repackage the interior.

It offers motorists enough space for five adults and their luggage.

Press the start button, however, and it is eerily silent as the cool electric dashboard dials spring into life. That silence continues when you drive off in one of three optional modes – energy-saving ‘eco’, general-purpose ‘comfort’ or full-on sporty ‘dynamic’.

So for drivers who miss that traditional big cat growl and throaty feline roar and still want a bit of ‘brrrm brmm’ with their battery-powered car, Jaguar has included an artificial sound to replicate just that.

You can even tune its intensity to your personal preference – right up to what Jaguar has called ‘maximum attack’ aggression when driven in dynamic mode.

Once to get the hang of it, and with a tweak to your driving style, the regenerative braking which uses up the energy created when the cars slows down, means you can even drive it without barely ever having to hit the brakes.

There are two levels or intensity settings for the regenerative braking. At ‘low’ the car drives pretty much like any conventional automatic car. So you have to apply the brakes to slow down or to anticipate bends.

But set the regenerative braking to ‘high’ and the car effectively applies the brakes itself the moment you take your foot off the accelerator or simply ease off the pressure.

The result is that with careful use of your right foot, you can effectively drive this car with just one pedal – the accelerator. The extra resistance from from the regenerative braking means the car also generates its own electric power with which to recharge the battery and help extend your range. 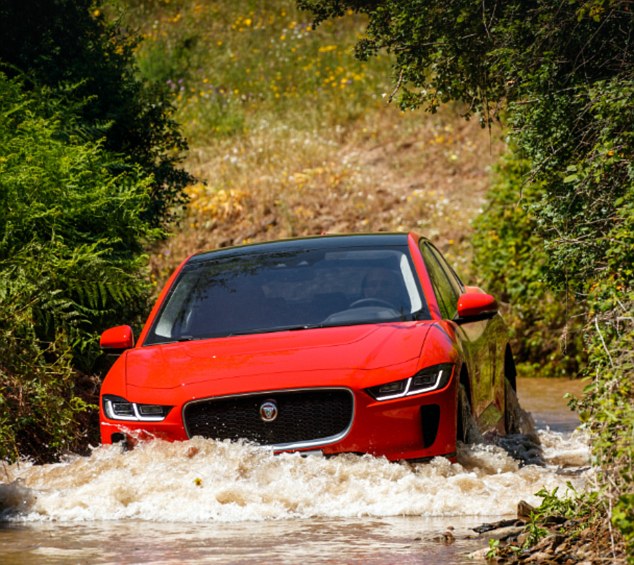 The iPace is a blend of sporting prowess, SUV practicality and family saloon or hatchback comfort 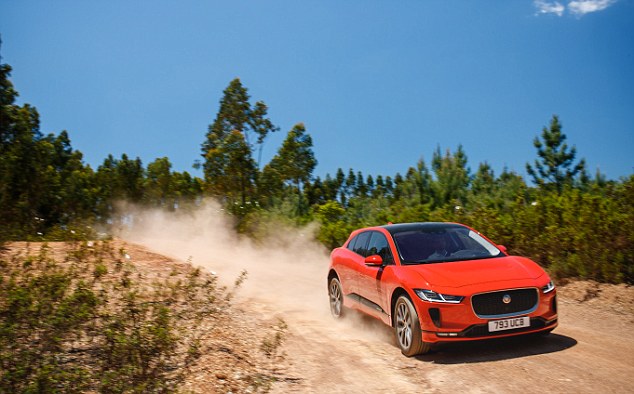 So your driving style changes and becomes more efficient to account for this as you attempt smoothly to accelerate, maintain speed or slow down using just your right foot. It almost becomes a game.

The I-PACE certainly feels solid and well planted to the ground. It’s quite a heavy car because of the batteries so weight savings have been found elsewhere. But surprisingly nimble for all that.

The all-wheel drive from each independently driven wheel means it’s pretty sharp around bends. The head up display on the First Edition I drove in a fetching Photon Red was particuarly useful and helps keep your eyes on the road.

It’s no slouch off-road either, having taken it across some non-tarmac dirt tracks. And who says cats don’t like water? It’ll wade to a modest depth of shallow water. But it’s not designed to tackle more extreme off-roading like a Land Rover.

I even had a chance to put the I-PACE through its paces on the race track to push its speed and handling to the limit in a way not possible on roads and motorways. Very impressive for a car not designed to be raced.

I had a very brief early drive of a prototype I-PACE on a small track on the outskirts of the Geneva Motor Show in Spring. But this was the real deal.

Jaguar’s I-PACE aims to take on maverick US electric car firm Tesla and has pipped to the post a host of mainstream rivals, including Audi’s E-Tron, in getting a premium electric carto the market. It has even filmed the I-PACE in a drag-race against both the Tesla Model X 75D and 100D in a 0mph-60mph-0mph head-to-head challenge.

First deliveries are in July, when the first physical cars reach showrooms for viewing and customer demonstrations. But customers can order and ‘configure’ their cars online now at www.jaguar.co.uk

The I-PACE is not manufactured in Britain, but in Graz, in Austria, where it is being built under licence for Jaguar by contract manufacturer Magna Steyr. Jaguar’s existing E-Pace SUV is also being built there. 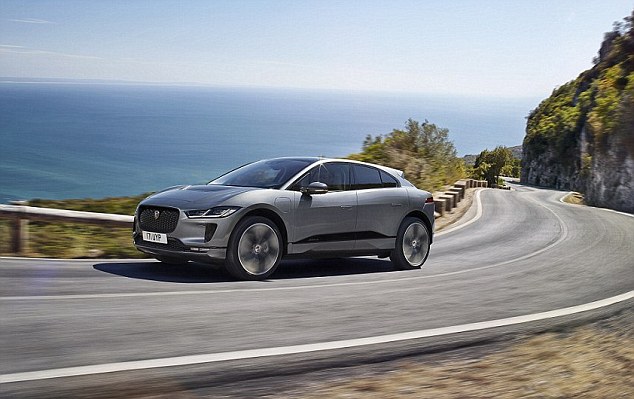 The I-PACE is not manufactured in Britain, but in Graz, in Austria, where it is being built under licence for Jaguar by contract manufacturer Magna Steyr 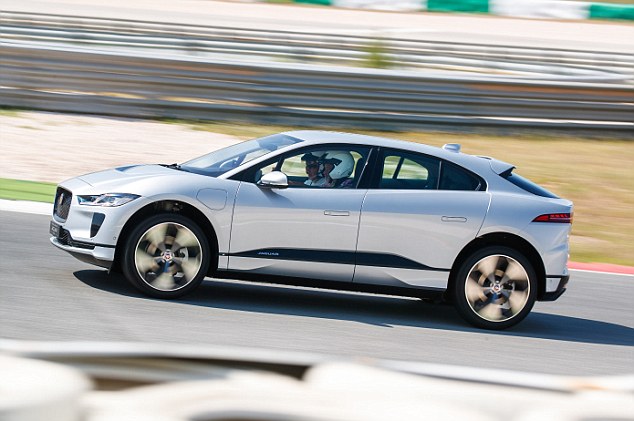 As a ‘connected’ car, the I-PACE is also the first Jaguar to provide wireless ‘over-the-air’ software updates 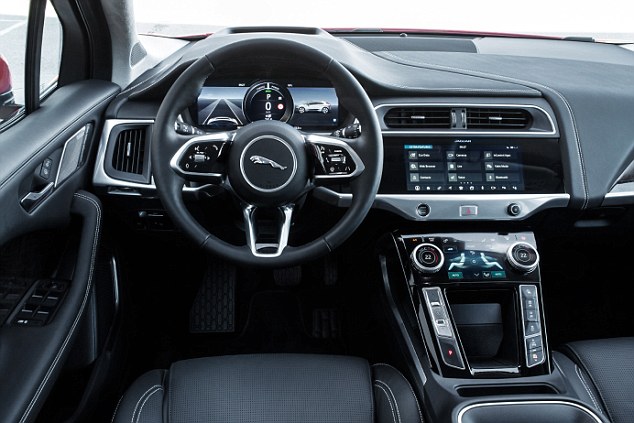 A full length panoramic roof gives the cabin a very airy feel but also absorbs ultra-violet light so there’s no need for a blind.

Its sleek, coupe-like silhouette is largely unchanged from the prototype unveiled two years ago. This in turn was influenced by the design of the one-off Jaguar C-X75 supercar prototype – which appeared in the James Bond movie SPECTRE but was never put into production. Its aerodynamic styling includes active vanes in the grille which also open when cooling is required, but close when not needed, to smooth the airflow.

Beneath the spacious rear seats are clever stowage spaces for a laptop and tablet, while the rear luggage compartment offers a 656-litre capacity which is expandable to and 1,453-litres with seats folded flat.

A full length panoramic roof gives the cabin a very airy feel but also absorbs ultra-violet light so there’s no need for a blind.

Personally I find it a bit spooky and intrusive, but the I-PACE also uses Amazon’s Alexa to allow the driver via an app to ask the car questions such as ‘Is my car locked? What is the charging level? Do I have enough range to get to work?’. Feels a bit like a spy-in the cab.

As a ‘connected’ car, the I-PACE is also the first Jaguar to provide wireless ‘over-the-air’ software updates to ensure owners always have seamless access to the latest infotainment, telematics and battery energy control software. I hope over time it works better than some of the software upgrades I have endured on smart-phones and laptops.

The driving force behind the new electric all-wheel drive ‘leaping cat’ I-PACE is two Jaguar-designed electric motors – one at each axle to drive the front and back wheels. Together they develop a total of 400 horse-power (PS) equivalent to around four Ford Fiestas.

Providing the power is the I-PACE’s hi-tech 90kWh Lithium-ion battery comprising 432 ‘pouch cells’. The battery unit sits centrally between the two axles, and as low down as possible to give perfect 50:50 weight distribution and a low centre of gravity.

Range anxiety is always an issue but Jaguar says it will achieve 298 miles on one overnight charge. 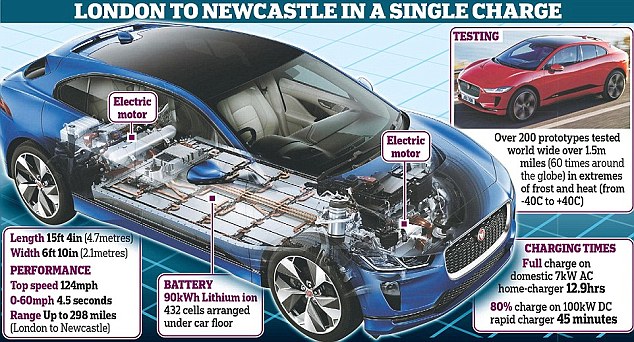 The I-PACE’s hi-tech 90kWh Lithium-ion battery comprises 432 ‘pouch cells’ which sit between the two axles, and as low down as possible to give perfect 50:50 weight distribution

Owners will be able to achieve an 80 percent battery charge in 85-minutes using a 50kW DC charger. A 30-minutes charge will give a range of about 80 miles.

The car is also fully compatible with 100kW DC Rapid Chargers (100kW), which enables an 80 percent charge in just 45 minute, as the technology is rolled out across the UK.

Home charging overnight with a 7kW AC wall box will achieve the same 80 per-cent state of charge in just over ten hours, while a full charge will take 12.9 hours.

To maximise energy use and save battery charge, a new navigation system is specially set up to help the electric vehicle take the best and most efficient route. It assesses the topography of the planned journey and uses ‘insights’ from previous trips – including driving style – to calculate a personalised range and charging plan. The aim is to reduce the driver’s ‘range anxiety’ – or fear they may run out of juice before they reach their destination.

Will it fit in my garage?

Range: Up to 298 miles (London to Newcastle)

Motor and transmission integrated into front and rear axles

You can even prepare the car remotely. A ‘smart’ battery pre-conditioning system automatically raises or lowers the temperature of its battery to maximise range before driving away.

For a company which built its reputation on sexy sports cars and luxury executive limousines, the newest member of Jaguar’s ‘PACE family’ of higher riding sports utility vehicles – which also includes the F-PACE and E-Pace – marks another significant step into the growing SUV market.

It’ll be interesting to see how easy –or not- the new Jaguar I-Pace is to live with in everyday ‘real’ world’ conditions experienced by busy families with complex lifestyles and diaries. It’s certainly fine for a regular commute to the office and back when you can charge your car at home and at work.

Longer trips and holidays may well take some planning, especially with the patchwork nature of public charging points.

But on the evidence of two days of driving, I can say that the I-PACE is an incredible feat of engineering and design and truly fun and practical to drive.

It’s a proper car that happens to run on electricity rather than an ‘electric car’, and about as far from an electric milk-float or golf buggy as you can get. I can’t wait to plug it in at home.