Rigby & Peller founder insist she did not betray the Queen

June Kenton, Britain’s most famous bra-fitter, is still deeply hurt by the furore that erupted when her firm Rigby & Peller was stripped of its Royal Warrant.

She was accused of publishing a ‘tell-all’ book about her time as the Royals’ official corsetiere, and spilling confidences on the Queen, Princess Margaret and Princess Diana.

She remains traumatised by the row that blew up in January over her supposed indiscretions. But she cares too much about the legacy of the business she built up with husband Harold over three decades not to give her side of the story. 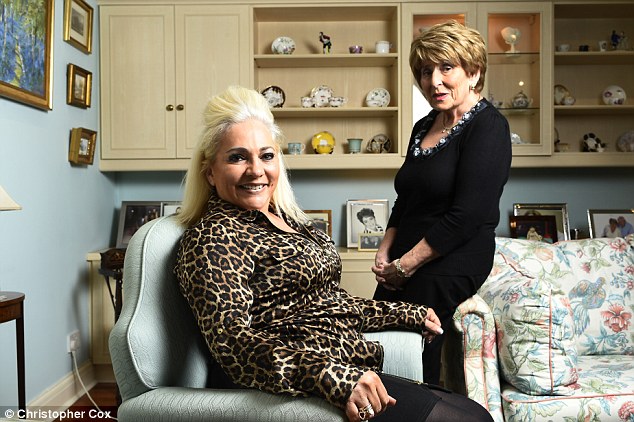 Intimate: June Kenton, pictured with her 47-year-old daughter Jill, is still deeply hurt by the furore that erupted when her firm Rigby & Peller was stripped of its Royal Warrant

Over tea at her North London bungalow, June, 82, gives her first interview since the controversy erupted over her autobiography. Daughter Jill helped her self-publish the memoir, called Storm In A D-Cup, as a present for her 80th birthday.

‘That’s where I got into trouble. Read it in there,’ June says, tapping a copy of the book with her finger. ‘Page four.’

The extract gives an account of a bra-fitting in the Queen’s bedroom in Buckingham Palace, on the day of a garden party. The sky ‘darkened dramatically’, there was ‘an enormous thunderclap’, and the Queen said she hoped it would not rain as she had 8,000 people coming for tea.

‘All I could think was that if I was her, I would be busy cutting sandwiches rather than bothering with a bra-fitting. Her Majesty’s thoughts were obviously elsewhere as she ordered the dogs to be brought in from outside, and only then did we settle down to the business in hand,’ June wrote.

Harmless, even anodyne stuff – and June insists ‘there is nothing kiss and tell’ about her book. Retribution from the Palace, however, was swift. Shortly after it was published last March, the Lord Chamberlain wrote to June, stripping Rigby & Peller of the Royal Warrant it had held since 1960. 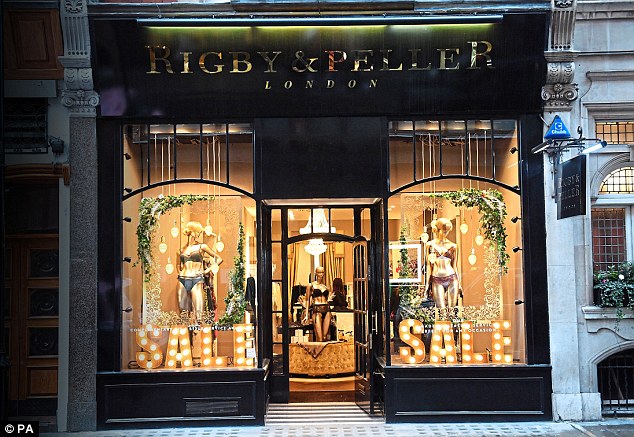 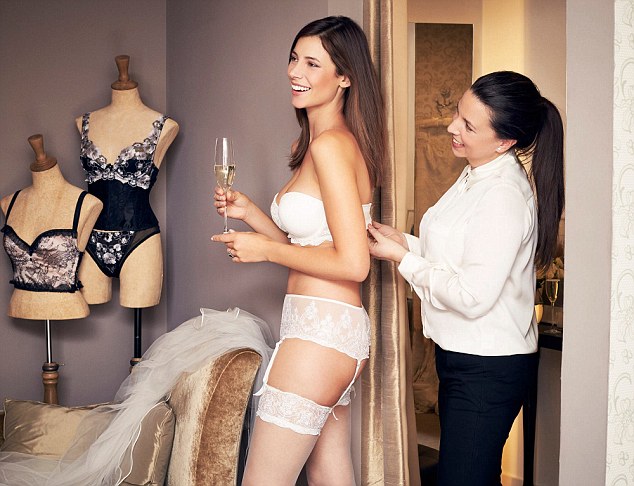 Unusually, Rigby & Peller fitters don’t use tape measures, sizing up customers by eye. June says around 85% of women wear the wrong bra size, and refuse to accept their shape changes

Her fall from grace put her ‘through the mill’. She says: ‘I have never spoken about anyone’s personal business. I don’t even talk about it in my sleep – and I still got into trouble.’

Daughter Jill, 48, who has helped run Rigby & Peller from the late 1980s, is also keen to set the record straight. ‘Mum built her business on discreet service. She has never divulged anyone’s personal information. That’s why it was all a bit of a shock for us.’

The episode has echoes of the ‘Crawfie’ affair where Royal nanny Marion Crawford, who looked after the Queen and Princess Margaret as little girls, was frozen out after writing a similarly tame memoir.

But the Kentons are as stoical as they can be about the Royals’ decision. ‘We feel very sad that we’ve lost the Royal Warrant but it is the decision of the Palace and we can’t change their mind,’ says Jill. ‘That’s it. End of.’

Ironically, it was the Royal Warrant that first convinced June to buy Rigby & Peller. In 1982, she had a telephone call from Tessa Seidon, who ran a made-to-measure lingerie business co-founded by her cousin, Bertha Rigby, and Hungarian corsetiere Gita Peller. Tessa explained she had cancer and needed to retire. Perhaps June and Harold might take over? Harold, 87, was against buying the firm, but June saw an opportunity to expand their underwear business, then called Contour.

‘I said to Harold, “How can we let the Royal Warrant go? I think we should buy it,” ’ she says. June had to meet the Queen before the £20,000 deal could be signed. In the summer of 1982, she was summoned to Buckingham Palace to be approved to take over Rigby & Peller’s Royal Warrant as corsetieres to Her Majesty. June was so nervous before meeting the Queen, she says there were ‘no words to describe the terror I felt’.

‘I couldn’t sleep; I was a complete mess,’ she says. The Kenton family ran Rigby & Peller for 29 years, liberating generations of women from ill-fitting bras along the way, before selling a majority stake in the company for £8 million to Belgian firm Van de Velde seven years ago. 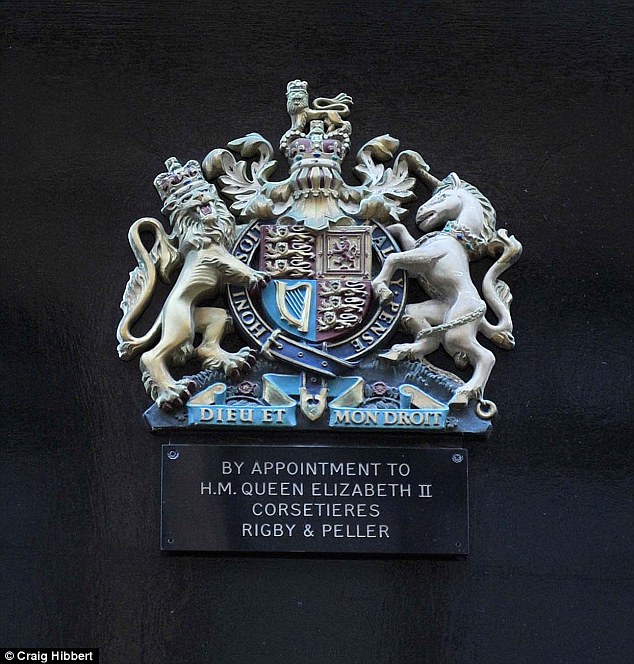 Ironically, it was the Royal Warrant that first convinced June to buy Rigby & Peller. In 1982, she had a telephone call from Tessa Seidon, who ran a made-to-measure lingerie business co-founded by her cousin, Bertha Rigby, and Hungarian corsetiere Gita Peller, offering a sale

Harold and son David were the ‘account brains’, Jill did sales and marketing and June did front-of-house and fittings. Jill says: ‘I loved it. The only thing that bothered me was that we’d sit down for dinner on a Friday night, as a Jewish family, and we’d be talking business.’

June says she got the idea of running a bra-fitting business working at her parents’ clothing firm on the Kilburn High Road. Her father Harry sent June to the fitting school run by lingerie brand Berlei. She says: ‘That gave me the idea that people should have proper fittings – my mother had all her corsetry made.’

June and Harold built their underwear business from scratch as newlyweds in the 1960s, starting from a market stall in Brixton. They opened the first Contour underwear shop in the Whitgift Centre in Croydon in 1970, before buying a second on the ‘dead side of Harrods’ in 1977. They also opened a store on Conduit St in Mayfair.

The turning point came in 1993, when ITV made a documentary about the Knightsbridge shop, by then rebranded as Rigby & Peller, called ‘Giving The Empire A Lift’. The day after the programme aired on TV, there were queues of women outside the shop from 9am. The Kentons installed a butcher’s ticket machine to manage the wait time of up to two hours, and sent overflow customers to the sister store in Mayfair by taxi.

‘The documentary rocketed us to stardom,’ says Jill, who was then managing the Knightsbridge shop. ‘We had to stop arguments about who was next in the fitting room.’

Even the Iron Lady was a convert – Baroness Thatcher sent a personal shopper to Rigby & Peller – and Theresa May comes in for fittings. Other celebrity customers over the years have included Cherie Blair, Joan Collins, Liz Hurley, Dawn French and Nigella Lawson.

Unusually, Rigby & Peller fitters don’t use tape measures, sizing up customers by eye. June says around 85 per cent of women wear the wrong bra size, and refuse to accept their shape changes. ‘Women think they are going to go to their grave in the same size. They are not.’

Despite stepping down from the board last year, June remains involved in promoting the company, which is now part of Van de Velde’s network of 35 stores globally. The group’s turnover in 2016 was £168 million, and pre-tax profits were £51 million, up from £37 million the previous year.

There are currently nine Rigby & Peller stores in the UK, employing 93 staff, and further expansion is planned over the next five years. It’s a long way from when June and Harold started out in business ‘freezing to death’ in a South London market during the bitter winter of 1962/63.

But for June, it remains the company she started with ‘my Harold’.