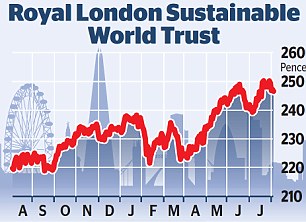 What does it do? The Royal London Sustainable World Trust aims to grow investors’ money over the medium to long-term, while at the same time only backing companies that operate in a ‘responsible’ way surrounding issues such as climate change, world health and how to deal with a rapidly expanding population.

What does the manager invest in? Mike Fox, who manages the investment trust, invests in a mixture of high-quality companies such as Amazon, Microsoft and packaging company DS Smith.

Around 35 per cent of the investments are UK-based, while just over a third are in the US.

What do the experts say? Tom Stevenson, investment director for personal investing at Fidelity International, notes that the trust is technology-heavy with Amazon, Google’s owner Alphabet and Microsoft in the top three holdings.

But Stevenson thinks this ‘reflects Fox’s belief that a shift in economic power to millennials is a key investment theme’.

What do the experts like? Stevenson says: ‘The first thing that jumps out at you with the Royal London Sustainable World Trust is its performance.

It has delivered double digit gains in each of the past five years with a notable lack of volatility. The fund is proof positive that doing the right thing does not need to come at a cost.’

Are there any downsides? Although the tech weighting has helped drive the trust’s performance, since stocks such as Amazon and Alphabet have been leading the market upwards, Stevenson notes this could pose a problem if sentiment towards these giants changes.

He says that such a change in market feeling could be caused by ‘high valuations and increasing threats from regulation’.