A top City investor which got its hands on Royal Mail shares in a preferential deal during the controversial privatisation is now cashing in on the postal service’s woes, The Mail on Sunday can reveal.

BlackRock has taken a short position in the FTSE 100 firm – and so it stands to gain from the recent share price slump caused by a fall in the number of letters it delivers.

The revelation is likely to anger critics of the Government’s Royal Mail sale who claimed City firms cashed in while the taxpayer was short-changed. 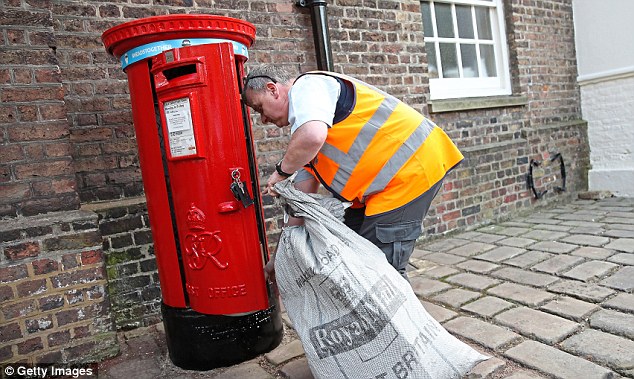 Bets against Royal Mail have hit an all-time high and are worth £230 million. Most of these have been taken out by hedge funds.

BlackRock’s bet – worth more than £30 million today – stands out because the US investment giant was one of 16 firms given priority investor status when Royal Mail was floated in 2013.

The sale was heavily oversubscribed by private investors, many of whom did not get all the shares they wanted because most were reserved for institutional investors such as BlackRock.

These priority investors were sold shares due to their supposed willingness to hold them long term.

But the National Audit Office has found most of them sold some or all their holdings within a few weeks, making a ‘substantial’ profit. For a supposedly loyal long-term investor such as BlackRock to short the shares takes matters a step further.

Former Chancellor George Osborne, who was in Number 11 at the time of the float, is now a part-time adviser at BlackRock.

Short-selling is a trading tactic used to bet a share price will fall. Investors borrow shares, sell them and then hope to buy them back at a lower price for a profit before returning them to the lender.

Royal Mail’s shares jumped on their stock market debut, leading to claims the taxpayer had been short-changed by at least £1 billion.

More than 5 per cent of Royal Mail shares are now out on loan to short-sellers, according to Financial Conduct Authority data, compared with 1.8 per cent in April.

Royal Mail has been hit by new data privacy laws which have led to a fall in the number of letters it delivers for businesses.

It is a tough start for new boss Rico Back, who is getting a £6 million ‘golden hello’ and plans to run the firm from Switzerland.

Last month Royal Mail faced a huge revolt when more than 70 per cent of investors voted against its pay report at its annual meeting. BlackRock declined to comment.