RUTH SUNDERLAND: If we end up with a no-deal Brexit, World Trade Organisation won’t save us

When hardline Brexiters talk blithely about a no-deal scenario where the UK operates under World Trade Organisation rules, you really do wonder whether they have lost the plot.

Either they have no idea of just how dysfunctional an organisation the WTO actually is – particularly with Donald Trump in the White House – or they are being wilfully blind to its defects.

The WTO, in its present incarnation, dates back to 1995, but its roots are in the global economic architecture that was built to secure peace and prosperity post-Second World War. More than 70 years on, though, the strains and tensions within the WTO are all too evident among the 164 member countries. 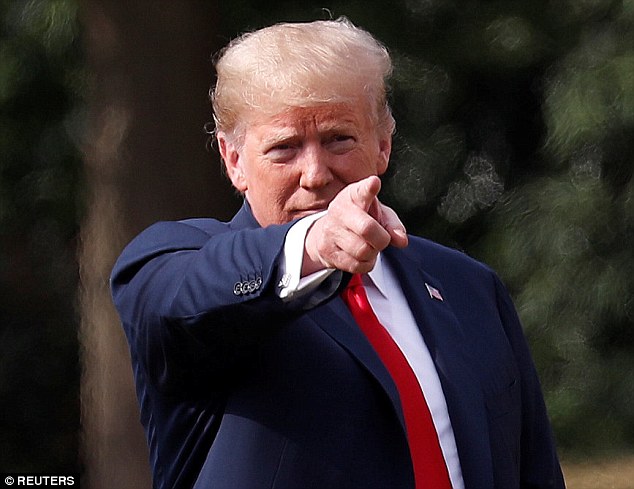 Your country needs you: Usually, the WTO looks to America for leadership, but that has not been forthcoming from Donald Trump

It is meant to be a bulwark against the trade disputes and protectionism that blighted the world economy after the Great Depression of the 1930s – but it is now facing an existential crisis as Trump tramples over all its most cherished principles.

This week the organisation was the subject of an agonised editorial in The Economist, which may seem arcane, but trade has a huge potential impact on all of our jobs, pockets and lives.

In order to progress, deals need unanimous agreement from all members, which is tricky enough in normal circumstances, let alone with a protectionist president in the White House.

Usually, the WTO looks to America for leadership, but that has not been forthcoming from Trump. The reverse: he has used a loophole known as Section 232 – which allows countries to impose trade restrictions if there is a risk to national security – in order to slap tariffs on aluminium and steel.

The US is also threatening to neuter the WTO by blocking appointments to its appellate body, which arbitrates trade disputes, so that it risks being unable to function after next year. Trump has already made abundantly clear that he sees no special relationship on trade with the UK, and – as a small nation on our own – we will be more vulnerable to collateral damage in his trade wars.

The EU has put in place provisional anti-dumping safeguards to stop European markets being swamped with what the industry estimates could be as much as 20 million tons of imported steel that would have gone to the US.

Post-Brexit, faced with protectionist actions by Trump, it could be much harder for the UK to mount a solo defence either through the WTO or other means.

There are separate issues vexing the WTO, namely the gulf between mature and developing economies on a range of issues including agriculture, the environment and pharmaceuticals.

Regardless of the rights and wrongs of Brexit, it is quixotic to imagine the WTO is the solution.

At a high level event on UK-China relations last week at the Institute of Directors, an economics professor from a leading Beijing business school openly mocked the UK Government.

Dr Leslie Young, from the Cheung Kong Graduate School of Business, was greeted with applause – and a nod from Jaguar Land Rover’s German boss Ralf Speth – when he pointed out how bad it all looks seen through Chinese eyes.

If investors lose confidence in the UK because of the political maelstrom, our credit rating is likely to fall and government debt will become more expensive to service. This is a non-trivial consideration, because the public finances are on an unsustainable path no matter what happens politically, because of our ageing population. The Tories are in such disarray that firms and investment managers are already braced for the possibility of a Corbyn government.

Again, whether all of this is right or wrong is beside the point: either way, it is deeply worrying.