Some ideas are utterly discredited in the eyes of mainstream economists but still have a stubborn popular appeal. Protectionism is one of them.

In the US, it has been a dirty word since the Smoot Hawley Act in 1930 raised tariffs on hundreds of imported goods in a doomed attempt to protect the American economy from foreign competition. Messrs Smoot and Hawley have gone down in history as the infamous pair whose misguided thinking made the Great Depression even worse.

An anathema to most serious economists for generations, protectionism is back in a big way: along with tax cuts and deregulation, it’s a key plank of Trumponomics. 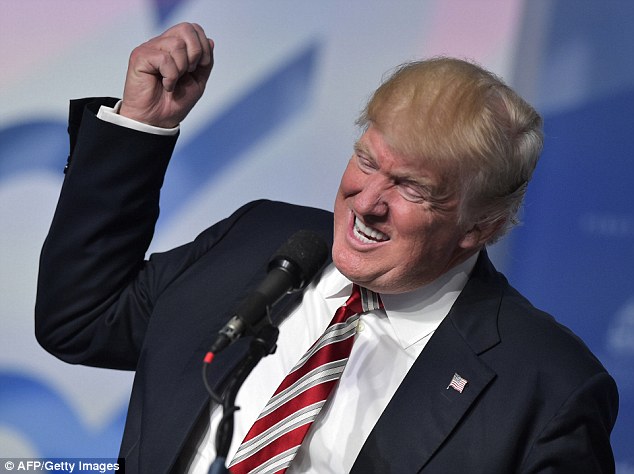 Thumped by Trump: According to his Twitter feed, Donald sees trade wars as ‘good’ and ‘easy to win’

For readers who haven’t been following this closely, here is the story so far. The US fired an opening salvo by proposing to put tariffs on $50 billion of Chinese imports. How has Beijing responded? By telling Trump to come and have a go if he thinks he’s hard enough. It is retaliating with threats of its own to impose tariffs of the same scale. Trump upped the ante this week saying he is considering $100 billion of extra tariffs on Chinese goods. Beijing shot back, saying it will take on the US ‘until the end, at any cost.’

According to his Twitter feed, Trump sees trade wars as ‘good’ and ‘easy to win’. That is an opinion he may end up having to revise. Waging a trade war against China will wound him in his heartlands, the industrial and farming areas where he has garnered much of his support.

Manufacturing companies, which will see the cost of imported raw materials driven up, will be badly affected. Shares in aircraft maker Boeing initially tanked on fears of trade tensions.

So too will the agricultural sector, as Beijing says it will put a 25 per cent levy on soy beans, seeds and fruit exports from the US in response to Trump tariffs.

Although markets have been nervous, the general view is that things will calm down and a crisis will be averted. Common sense would certainly suggest Trump will step back from the brink, as the US and China have a co-dependent relationship.

The Chinese export far more to America than they import. The US-China trade deficit is around $400 billion, so tariffs would hurt the Chinese more.

But Beijing holds around $1.7 trillion of US government bonds, and if it chose to pull back on its lending to Washington, it could inflict significant harm.

A bond sell-off would create havoc on the global money markets and make it much more expensive for America to finance its spending. But there is no guarantee common sense will prevail. We can only hope the experts are right and this is not a repeat of the 1930s madness. As Pantheon Macroeconomics points out, global trade flows collapsed and did not return to pre-Smoot Hawley levels until the 1950s. Even if fears over trade wars do not materialise this time, though, it is no wonder markets have the jitters that the President of the world’s biggest economy is an unpredictable and capricious man who dispenses his economic views by late night tweet.

In the climate of fear and disillusion that followed the financial crisis, Trump and his supporters are turning inward for comfort. In the UK this has manifested itself through Brexit and more recently corporate patriotism – the defence of GKN as a national asset, and the uproar over De La Rue losing the contract to print post-Brexit blue passports.

Never mind that GKN is an international company, with 60,000 staff in 30 countries – only a tenth of whom are working in the UK – and a share register replete with overseas investors.

Never mind, too, that GKN and De La Rue have been lacklustre performers for years.

We are in the realms of feeling, rather than rational debate. The sadness is that protectionism will not solve the problems of America’s rustbelt voters who put their trust in Trump, any more than Brexit will bring a brave new dawn to Britain’s economic blackspots.