The AA chairman sacked for hitting a colleague had earlier faced a police investigation for allegedly punching a woman in the street.

Bob Mackenzie struck Catherine Dodkin in the face, splitting her lip, and pushed her against a wall splitting her head open, it is claimed.

During the fracas, Mackenzie also allegedly broke his leg after being knocked over by the woman’s boyfriend who tried to protect her. 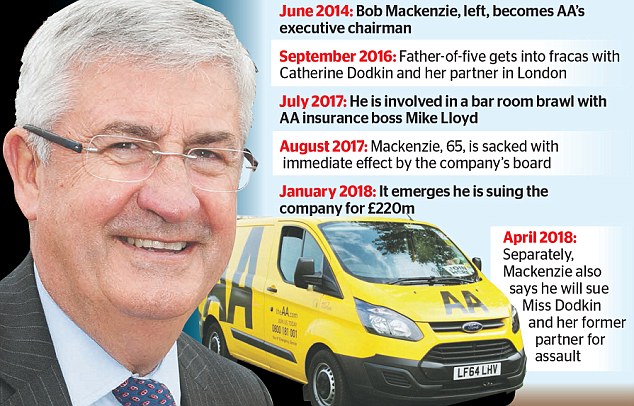 The father-of-five told colleagues at the AA he was injured after tripping on a pavement. It came ten months before he attacked a fellow executive at the company, leading to his dismissal and an ongoing legal battle over its terms.

Last night Mackenzie’s spokesman refuted Dodkin’s version of events and said he was separately launching a private prosecution for assault against her and her then-partner, Warren Spires.

Describing the incident to the Daily Telegraph, Dodkin claimed she was attacked after challenging a chauffeur driving Mackenzie and his wife home from a black-tie dinner, for driving too fast.

She said: ‘This car went past. I thought it was going too fast and I was concerned. I went to speak to the driver and knocked on the window and said: “Crikey! You were going very quickly. What were you doing?”

‘The next thing I know this man got out of the back and came around and started shouting at me.

‘He [Mackenzie] was inches from my face. His body language was so aggressive. And then he punched me. He smacked me in the face. That is when my lip split.’

Dodkin, 40, said she was floored by the punch but got back up, only to be shoved into the wall. She was left pouring with blood from a resulting head wound.

Dodkin said her boyfriend – who had been parking his car – then intervened. She claims Mackenzie broke his leg and ankle after he ‘went for’ her partner, who defended himself.

Mackenzie’s spokesman said: ‘Having heard these allegations from Dodkin, which we completely repudiate, we are instructing lawyers to issue criminal proceedings for assault against Catherine Dodkin, of LPP Estates, and Warren Spires, of Euro Car Parks.’

Mackenzie, 65, claimed he was acting in self-defence to protect his wife Jane. He denied punching Dodkin but said he shoved her. Mackenzie was sacked from his £1.2m-a-year job after he attacked the AA’s head of insurance, Mike Lloyd, in July last year. He blamed it on ‘stress and exhaustion’ from his job, and mixing prescription drugs with alcohol.

He said the incident, at the five-star Pennyhill Park Hotel, in Surrey, was ‘out of character’.

He is suing the AA for £220m but the motoring organisation is likely to counter-sue and demand the return of £1.2m bonuses owing to gross misconduct. The legal fight will take place in the High Court.

Dodkin, who runs a property management business in Mayfair, said she was attacked ten months earlier in Bermondsey, south-east London, in September 2016.

An investigation by the Metropolitan Police was dropped because neither side wanted to press charges. There was also a lack of CCTV evidence.

Mackenzie claims Dodkin acted first in the fracas. He said: ‘The woman scratched at my wife. I tried to hold the woman at arm’s length. She ripped my hearing aid and threw it down the road.’

A spokesman for Catherine Dodkin said: ‘The police interviewed all parties at the time and she would be very happy to cooperate with them again or anybody else.’