Sainsbury’s and Asda could be forced to sell as many as 245 stores as a result of their £14.1billion merger.

It will mean that if the tie-up gets the green light from regulators, almost one in ten of the merged group’s 2,800 supermarkets could be taken on by rivals.

Stores in the South East and North West are likely to be those most at threat, according to data published by Maximise UK, a consultancy which identifies the best locations for stores. 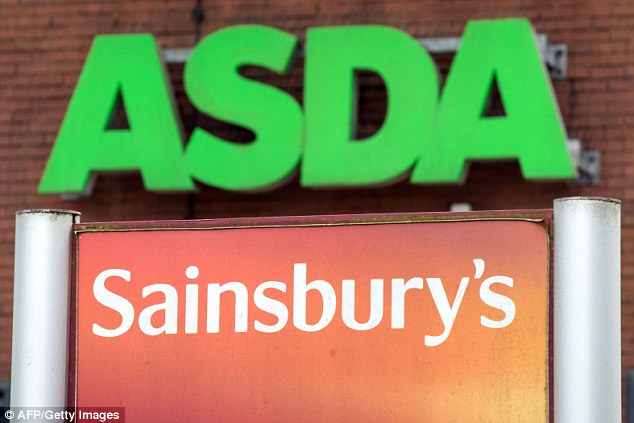 The Competition and Markets Authority (CMA) is expected to force Asda and Sainsbury’s to give up stores in areas where it could hurt competition, potentially pushing up prices for customers.

Maximise’s research suggests that a minimum of 73 shops will need to be sold to get the merger approved by the CMA.

But in a worst-case scenario, the merged group could be forced to get rid of 245 stores.

This is because the CMA may not consider Lidl and Aldi as competitors and only factor in so-called ‘Big Four’ rivals Tesco and Morrisons.

Maximise’s director David Haywood said: ‘The real focus will be on how Sainsbury’s and Asda’s main supermarkets operate at a local level and how they overlap.

‘The CMA will be concerned about whether the deal reduces the number of competing brands within a ten or 15-minute drive.’

Haywood worked on the takeover of Safeway by Morrisons in 2004, the last UK retail merger of a similar scale. He said that at 20,000 sq ft, many of Sainsbury’s and Asda’s stores were likely to be too big for other companies to take on. ‘The key issue is who can actually acquire store locations of this size,’ he said.

‘They’re typically too big for an Aldi or a Lidl.’

Sainsbury’s boss Mike Coupe has insisted that no stores will be shut and no jobs will be cut as part of the deal. However, he has not ruled out selling shops.

Sainsbury’s has 2,200 stores in the UK, 600 of which are large supermarkets and 800 smaller convenience stores.

The remaining 800 are Argos stores, which Sainsbury’s bought for £1.4billion in 2016. Asda has 600 stores which are mostly big supermarkets.

Coupe, 57, is confident the CMA will rule in the tie-up’s favour following the successful mergers of Tesco and Booker and gambling firms Ladbrokes and Gala Coral last year.

Stephen Springham, head of retail research at commercial property consultancy Knight Frank, said: ‘We believe there will be minimal food store closures as a result of the proposed merger.’

Union bosses said they would fight to protect jobs.

Gary Carter, GMB national officer, said his union ‘will fight to save jobs and retain stores which are vital to the economic wellbeing of communities’.