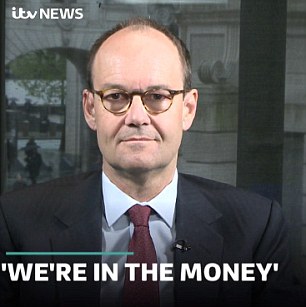 The Sainsbury’s boss caught singing ‘We’re in the money’ after unveiling a takeover of Asda was paid £3.4million last year.

Mike Coupe – who masterminded the blockbuster £7.3billion tie-up – saw his pay packet rise by 46 per cent in the year to February.

Coupe was recorded singing show tune ‘We’re in the money’ inbetween TV interviews to explain the reasons for the Asda merger.

It came amid speculation the supermarket chains would be forced to sell dozens of stores, causing upheaval for staff.

Coupe later apologised for his choice of tune.

‘This was an unguarded moment trying to compose myself before a TV interview.

‘It was an unfortunate choice of song, from the musical 42nd Street which I saw last year, and I apologise if I have offended anyone.’

The married father of two, whose family live near York, is a music fan who enjoys letting off steam by playing guitar. On one occasion he even performed in front of 5,000 colleagues at a conference in Birmingham.

In a bid to boost enthusiasm for seafood sales, Coupe strummed an adapted version of James Blunt’s hit You’re Beautiful to a staff member dressed up as a crustacean named Dawn the Prawn.