Sainsbury’s to slash management jobs after £14.1bn merger with Asda

Sainsbury’s has admitted it will slash management jobs as part of its £14.1 billion merger with Asda.

In a letter to MPs, Sainsbury’s chief executive Mike Coupe confessed that ‘a very small number of well-paid managerial roles will be duplicated across the group’.

It is not known how many jobs are at risk but they are likely to be in head offices where two of the same roles exist. 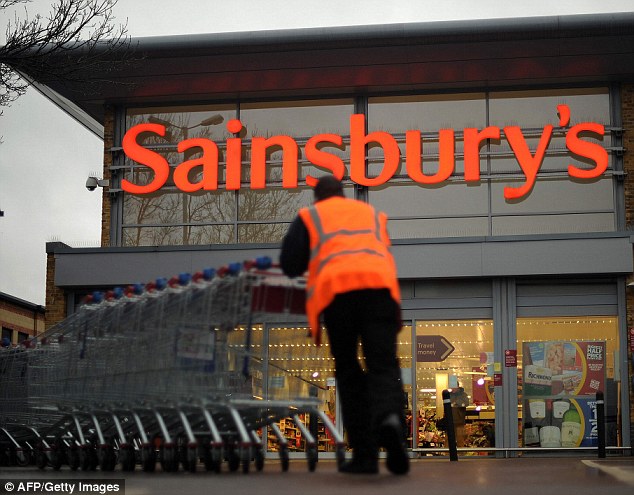 Promise: Sainsbury’s boss Mike Coupe has said that no shop-floor jobs will be lost as part of its tie-up with Asda

So far, Coupe has promised that no shop-floor jobs will be lost as part of its tie-up with Asda, which will turn the merged group into the UK’s biggest supermarket, valued at £14.1 billion.

Sainsbury’s confirmed it will keep Asda’s head office in Leeds open for a year if the Competition and Markets Authority approved the deal, but it is understood it could face closure in future.

Asda employs around 2,000 people at its head office in Leeds, while Sainsbury’s has several thousand staff at its headquarters.

Last year Asda cut 300 roles at its main office while earlier this year Sainsbury’s revealed thousands of jobs were at risk as it slashed the number of store managers.

Coupe was responding to concerns raised by MPs on what the deal would mean for employees.

In a letter to Rachel Reeves, chairman of the Business, Energy and Industrial Strategy Committee, Coupe said: ‘No company can guarantee that absolutely every job across its business will stay unchanged forever.

‘We would expect that a very low number of well-paid managerial roles will be duplicated across the group. It is too early to speculate on where these will be and we would aim to manage these via natural attrition where possible.’

He added that Sainsbury’s £1.4 billion takeover of Argos in 2016 has created 1,000 shop floor jobs. However, duplicate roles across the group’s central offices have been removed.

Last week Sainsbury’s employees lashed out at ‘greedy’ bosses over changes to pay and conditions that could mean more than 9,000 are left out of pocket.

Some employees are expected to be £3,000 worse off a year under changes to contracts that will see paid breaks scrapped, additional pay for working Sundays cut and night shift overtime rates slashed. Sainsbury’s has offered to top up staff’s salaries for 18 months but will review contracts again after.

Earlier this month Coupe pocketed £1.8 million of shares, shortly after he was caught singing We’re In The Money as the Asda deal was announced.

Sainsbury’s and Asda have also pledged to put the squeeze on larger suppliers like Unilever in a bid to give shoppers a 10 per cent price cut on household items. The merged group is targeting £500 million worth of cost savings.

Reeves urged the competition regulator to look closely at the impact on consumer choice and jobs. ‘The likely effects on the supply chain must be seriously examined, especially when small and medium suppliers are already under pressure on prices,’ she said.

‘Over the coming months, Sainsbury and Asda need to spell out much more detail on what this deal will mean for jobs at the Leeds office and at all levels and give greater reassurance to their existing workforce.’ A spokesman for Sainsbury’s said none of the job losses would result from closing stores or warehouses. ‘We have no plans to close stores as a result of the merger and believe colleagues will have more opportunities within a larger and more resilient group.’