Santander’s profits fell by 18 per cent in the first half, as it suffered in a ‘competitive and uncertain’ banking market.

Across its UK operations, Spanish-owned Santander saw its profits slip to £920million between January and June, down from £1.12billion a year earlier.

The banking giant lost over 10,000 customers in the UK to switching between January and March this year, figures from payment group Bacs reveal. 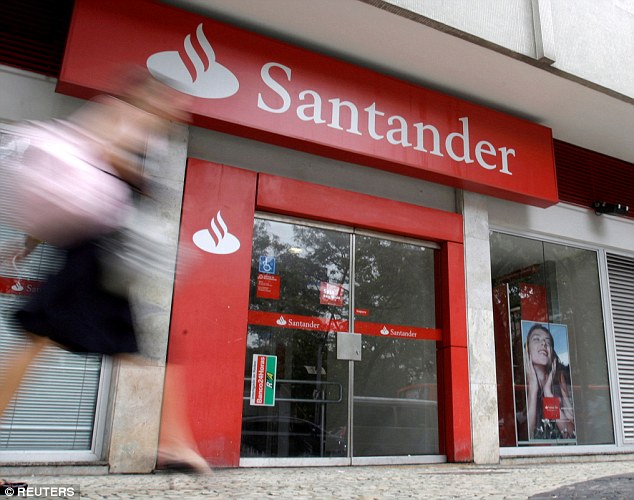 Shaky start: Santander’s profits fell by 18 per cent in the first half, amid a ‘competitive and uncertain’ climate

On a statutory basis, Santander’s pre-tax profits fell 15 per cent to £903million in the first half.

Customer deposits fell to £172.6billion, down from £174.4billion a year earlier.

Earlier this year, Santander said it was continuing to review its 779-strong branch network, after announcing 21 branch closures in the UK during the first half.

Nathan Bostock, chief executive of Santander UK, said: ‘The competitive and uncertain operating environment has resulted in profit before tax of £903 million, down 15 per cent year on year.’

He added: ‘Cost discipline is a key priority for management.

‘We are progressing with our 2018 efficiency initiatives and expect the benefits of our actions to come through in the second half of the year.’

The bank’s net interest income slipped by 6 per cent after being hit by lower mortgage pricing and a fall in the number of customers on standard variable rate deals.

Net mortgage lending grew by £2.3billion in the first half, after the group ramped up its focus on lending to trading businesses.

Santander took no further hit from payment protection insurance mis-selling in the first half, but it was knocked in the first quarter by a £60million impairment charge, including a further writedown on Carillion as well as another firm, understood to be troubled fellow outsourcer Interserve.

The bank’s UK arm enjoyed a better performance in the second quarter, with profits up 18 per cent quarter on quarter at £489million. It said it was also seeing signs that its net interest margin was ‘stabilising.’

Internationally, the bank performed strongly in the US and Brazil over the period. Ditch and switch: A growing number of consumers are switching banks to get a better deal

Next month, the Bank of England’s Monetary Policy Committee meeting will vote on whether or not to raise interest rates in the UK from 0.5 per cent.

Figures published by payment group Bacs today reveal that increasing numbers of consumers are switching banks to get a better deal on their savings.

The number of current account customers ditching and switching bank or building society is up by 6 per cent year-on-year, the figures show.

Nearly half a million switches were completed in the first half this year, marking a 7 per cent increase from the same point a year ago.