Savers who prefer to do their banking in the High Street are ditching big firms and turning to smaller building societies.

Nottingham Building Society has announced it has seen a 10 per cent rise in the number of customers using its branches.

It has doubled its branch number to 67 over six years, made them more customer-friendly and offers a wider range of services. 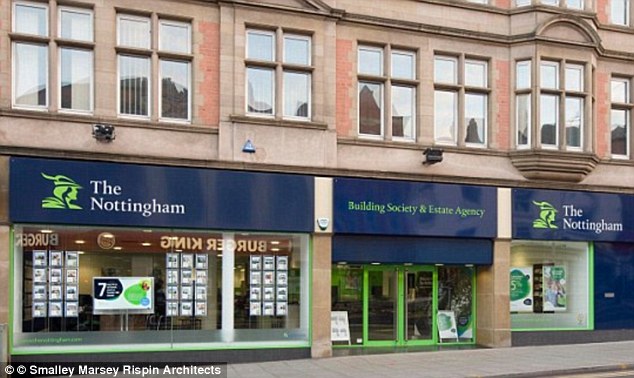 Bustling: Nottingham Building Society has announced it has seen a 10 per cent rise in the number of customers using its branches.

Coventry BS has seen a doubling of savings coming in through its 70-strong branch network in five years.

Others including Dudley, Marsden and West Bromwich have revamped branches and services to suit modern demands, while Newcastle BS has set up a branch in the local library in Yarm, Stockton-on-Tees.

Small banks are also making their presence known. Metro Bank aims to expand its network from 55 to 110 branches by 2020.

Its Watford branch opens at the end of the month, with Southampton, Bath, Bristol and Northampton next on its list.

In contrast, big banks, which pay dismal returns on the £640 billion they hold in easyaccess accounts, continue to cull branches. Only last week, RBS announced the death of a further 162.

The big banks offer hard-pressed savers a lousy deal. They failed to pass on November’s full 0.25 per cent rise in base rate and could well do the same with the next rise — expected this summer.

HSBC pays a miserly 0.05 per cent on its Flexible Saver easy-access account. Halifax Instant Saver, Lloyds Standard Saver and Barclays Everyday Saver accounts — all at 0.2 per cent — are not much better.

Savers living near the nine Kent Reliance branches can earn as much as 1.25 percentage points more by switching to its Easy Access account at 1.3 per cent. It’s worth an extra £125 interest a year on £10,000.

Other good deals include Family BS, based in Epsom, Surrey, at 1.11 per cent on its Branch Saver, and Virgin Money’s Easy Access Saver at 1.01 per cent, on offer through its 75 branches around the country.

Even if you can’t get these top rates, you will most likely do better than the big banks in the High Street.

Local societies are coming out with new accounts, too.

Last week, Principality BS launched its Easy Saver at 0.9 per cent, while rival Swansea’s Personal Premier, open to residents of Wales only, pays 1 per cent.

They also beat the big banks on cash Isas and fixed-rate bonds. Among the best easy-access cash Isa rates are Coventry (1.25 per cent), Nottingham (1.2 per cent), Market Harborough (1.15 per cent), Virgin Money (1.01 per cent) and Melton Mowbray, Chorley and Mansfield (all 1 per cent).