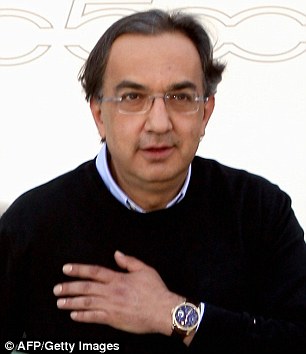 The Italian-Canadian rescued Fiat and Chrysler, turning them into the world’s seventh-largest car maker, worth £22billion.

John Elkann, heir of the Italian Agnelli family which is Fiat Chrysler’s largest shareholder, said: ‘Unfortunately, what we feared has come to pass. Sergio Marchionne, man and friend, is gone.’

A workaholic lawyer and accountant, Marchionne was born in the poor region of Italy and emigrated with his parents to Toronto aged 14.

He joined Fiat in 2004 and was quickly made chief executive. Fiat lost more than £5.3billion in 2003 but Marchionne returned it to profit two years later.

In 2009, he persuaded US president Barack Obama to let Fiat take over failing Chrysler rather than liquidate it.

He took full control in 2014, structuring the deal so that Chrysler effectively paid for much of the £3.8billion cost.

Marchionne had surgery in Switzerland for a shoulder problem three weeks ago. He was replaced by British Jeep boss Mike Manley last weekend as his health worsened.