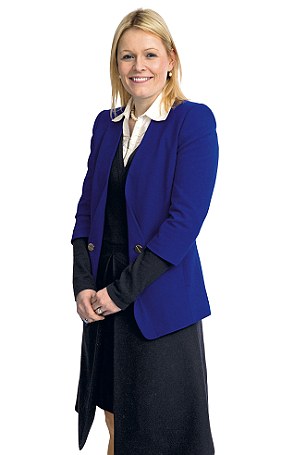 She is the FTSE 100’s youngest female boss and took the reins at Severn Trent in 2014.

The Yorkshire-born executive’s first job was on a fried chicken stand.

After graduating from Cambridge University she joined management consultancy Accenture and then rose up the ranks at BT, eventually taking charge of its Openreach infrastructure division.

Garfield, who has two sons, was named one of the world’s fastest-rising corporate stars by Fortune Magazine in 2013. She was paid £2.45million by Severn Trent in 2017.

She said: ‘This is an incredible honour, not only because I remember taking a huge amount of inspiration from some of the previous winners, but also because of the awesome story of Madame Clicquot herself, who was a strong role model at a time when women in business were almost unheard of. ‘I know I wouldn’t have been able to win this award without the support of everyone at Severn Trent who works to keep water flowing every second of every day, so this is as much a win for them as it is for me.’

Alys, 28, started her career as a management consultant.

She was praised by judges for creating ‘an entire category by bringing the world of sextech to the masses’.

Amanda Nevill, the chief executive of the British Film Institute, won the social purpose award for her work to open up the film industry to young people from a variety of backgrounds. Judges said the 61-year-old had also helped to transform BFI’s base into ‘one of London’s coolest arts venues’.