Shares in Johnston Press, the owner of a stack of newspaper titles including The i and The Scotsman, soared amid rumours of a mystery buyer.

Christen Ager-Hanssen, the Norwegian investor who is Johnston Press’s largest shareholder through his firm Custos Group, denied he had been buying up more stock. 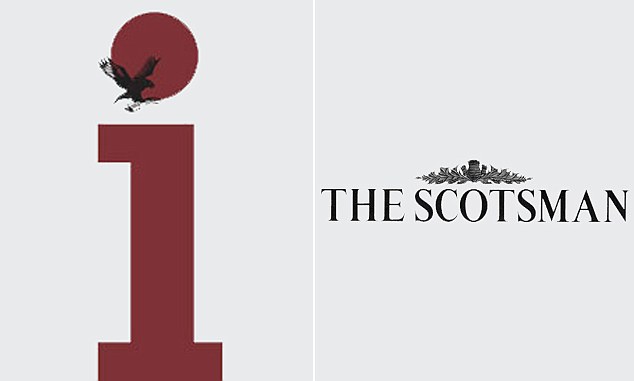 Big names: Johnston Press, owns a stack of newspaper titles including The i and The Scotsman

But he speculated that the hefty trades could be a sign of a new investor hoovering up shares.

He said that buying shares on a Thursday was a ‘classic move’ which allows an investor planning to buy a big stake to stay anonymous for as long as possible.

Stock market rules dictate that an investor must let the market know when it owns more than 3 per cent of a company, within two trading days of crossing that threshold.

But by working its way up to 2.9 per cent on Thursday, an investor could then scoop up more and more shares on Friday and Monday before having to notify the market on Tuesday.

Johnston Press already has two activist investors in its top ten shareholders – Custos and investment fund Crystal Amber – who are looking to drive change at the newspaper business.

The media group’s chief executive Ashley Highfield resigned in May, and in June it said that revenues for the year so far were down 9 per cent. Ager-Hanssen said: ‘I’m not impressed by the board at all. I think this company has the potential to do something, it’s a very important industry player in the UK market, but I think it’s sad that the board has been mistreating the company so extremely.

He added that his firm had ‘ideas of what we want to do, but we want to see what the board comes up with first’.

In the FTSE 100, pharmaceuticals giant AstraZeneca slipped by 0.9 per cent, or 56p, to 5881p as investors were given a bitter pill to swallow. It announced that its new drug for chronic obstructive pulmonary disease did not do as well as expected in its most recent trial against competitors.

AstraZeneca’s Colin Reisner said the findings were ‘inconsistent’ with previous data, and that the firm was analysing the results.

The UK’s FTSE 100 index ended the day down 0.2 per cent at 7563.22 points, as the renewed spectre of a trade war dragged down heavyweight mining stocks.

But in the FTSE 250, telecoms company TalkTalk soared as Barclays raised its recommendation for the stock. TalkTalk ended the day up 8.4 per cent, or 10.4p, at 134p, as the analysts said operating trends were set to improve and noted its customer base was growing.

Infrastructure investor John Laing climbed to a record high after releasing strong results, firmly distancing itself from the woes of bust outsourcer Carillion as it said it was continuing to reduce its business in the UK.

But gambling software firm Playtech had a hard time impressing shareholders, as its chief executive defended the chairman’s ‘secret’ hefty pay rise despite two profit warnings in the past year.