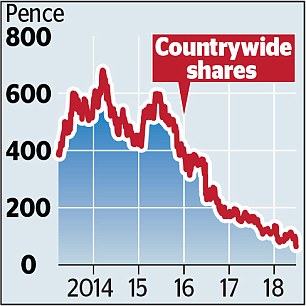 Shares in Britain’s biggest estate agent crashed to an all-time low after it issued a second profits warning in just six months and outlined plans to tap investors for funds to tackle crippling debts.

On a brutal day for investors, Countrywide stock fell 30 per cent, meaning it has lost 54 per cent of its value so far this year and more than 90 per cent since its peak in 2014.

The group, which owns brands including Hamptons, Bairstow Eves, Beresford Adams and Gascoigne-Pees, was worth £1.6 billion four years ago but is now valued at £131m.

The latest sell-off came after bosses warned annual profits would be £20m lower than last year, at about £45m. Four years ago, it made profits of more than £120m.

Countrywide also said it is looking to raise funding from shareholders as it battles to reduce its £192m debt pile. Analysts reckon it could tap investors for up to £125m. The move follows the appointment of Peter Long as executive chairman in January following the departure of chief executive Alison Platt in the wake of a previous profits warning.

Long, 66, who is also chairman of Royal Mail and deputy chairman of Tui, has vowed to take Countrywide ‘back to basics’ after a disastrous few years.

As well as a string of management mishaps, including the merger of the lettings and sales businesses, the company has been hit by a slowdown in the housing market and competition from online rivals such as Purplebricks. Long has already outlined plans to axe 150 jobs but yesterday’s bleak update dashed any hopes of a quick turnaround. Shares fell 30 per cent, or 23.5p, to 55p.

Anthony Codling, an analyst at Jefferies, said he expects Countrywide to make profits of just £40.2m this year – less than the amount signalled by the company.

He added: ‘The housing market is dreadful – even the online challengers are finding that they cannot outperform the current conditions, and there is little to be done when homeowners stop moving.

‘If times are hard for Countrywide we can only imagine how the rest of the market may be struggling.’

Russ Mould, investment director at AJ Bell, said Countrywide is facing ‘three big challenges’, reflected in the profit warning, which are ‘the housing market is weak; its industry is facing disruption from online competitors which don’t have the costs of running High Street offices; and the company is carrying too much debt’.