Shares in drug maker Shire surged after Japanese rival Takeda revealed it was poised to swoop on the £32bn firm.

The Dublin-based company, founded in the UK and listed in London, surged by 25 per cent in early trading after the announcement.

Its board said it was aware of Takeda’s interest but had not been formally approached yet. 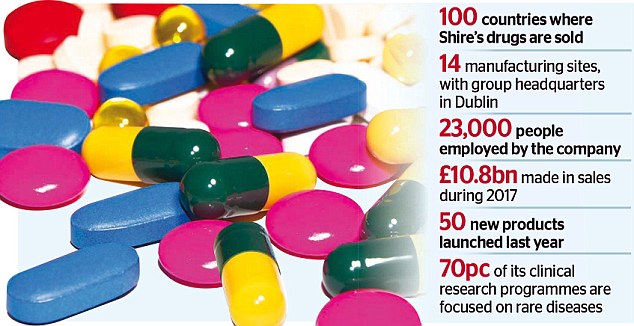 Shire said yesterday: ‘There can be no certainty that any firm offer for the company will be made.’

Takeda said that its advances were in the early stages but a takeover of Shire could strengthen its position in several fields of medicine and allow it to become ‘truly global’.

It said any bid would have to deliver several benefits, such as improving its main oncology, gastrointestinal and neuroscience arm.

Takeda also said it had its eye on Shire’s pioneering rare disease portfolio, which has been a major focus of Danish chief executive Flemming Ornskov.

It added: ‘The company believes a potential transaction with Shire presents an opportunity to advance its stated Vision 2025, build on its current strong momentum, and create a truly global, value-based Japanese biopharmaceutical leader. Clearly defined strategic and financial objectives are core to Takeda’s disciplined approach to acquisitions, including in relation to its dividend policy and credit rating, which are well-established.’

Shire, best known for its attention deficit drug Adderall, was founded in 1986 and later emerged as one of Britain’s pharmaceutical stars.

It was started above an off-licence in Basingstoke, Hampshire, by a small group of investors, and its first product was a calcium supplement, Calcichew. The firm then embarked on a string of acquisitions and bought Adderall, which massively boosted its growth.

By the year 2000 the drug accounted for about three-quarters of its sales.

Shire was Britain’s third-largest pharmaceuticals company, behind Glaxosmithkline and Astrazeneca, until 2008 when it moved its headquarters to Ireland for tax reasons.

Shire reported revenues of about £10.8bn and profits of more than £3bn last year.

Under takeover rules, Takeda must now make an offer for Shire or walk away by April 25.

That potential deal would come just two years after Shire itself swooped on US rival Baxalta, buying it for £22bn.