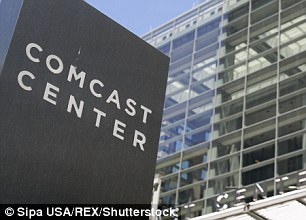 The owner of Universal Studios could become the world’s second-most indebted company if it takes over Sky and 21st Century Fox’s entertainment businesses.

Moody’s, the credit rating agency, warned the potential deals would more than double Comcast’s debt pile to a ‘staggering’ £123billion.

The US cable giant is vying with Fox to buy British broadcaster Sky for £22billion. It is also reportedly poised to launch a £45billion counter-bid for Fox itself, currently set to be bought by Disney for £39billion.

At £123billion its debt mountain would be even higher than the £90billion owed by telecoms firm AT&T – the current most indebted firm.

However AT&T’s debt would rise again to £130billion if its takeover of Time Warner is approved.

Moody’s warned that Comcast’s purchases would threaten its credit rating. It said: ‘If Comcast re-emerges as a higher bidder with a debt-financed offer for the assets of 21st Century Fox, it would represent a material shift in financial policy inconsistent with past behaviour.

Adding a cash bid for Fox on top of the bid for Sky means consolidated debt [would increase] from just under $65billion (£48billion to a staggering $166billion (£123billion).

This leaves no room for an offer for Fox without imperilling the A3 rating.’