Sir Martin Sorrell was already plotting his audacious return to the advertising world just 48 hours after resigning from WPP.

The 73-year-old’s exit from the global empire he built from scratch followed allegations of misconduct, which he denied, and left the industry in shock.

Within days he was drumming up support for his next venture S4 Capital, which he unveiled yesterday just six weeks after walking out of WPP.

The father-of-four is to plough £40million of his own cash into S4, which has been reversed into stock market listed shell company Derriston Capital. 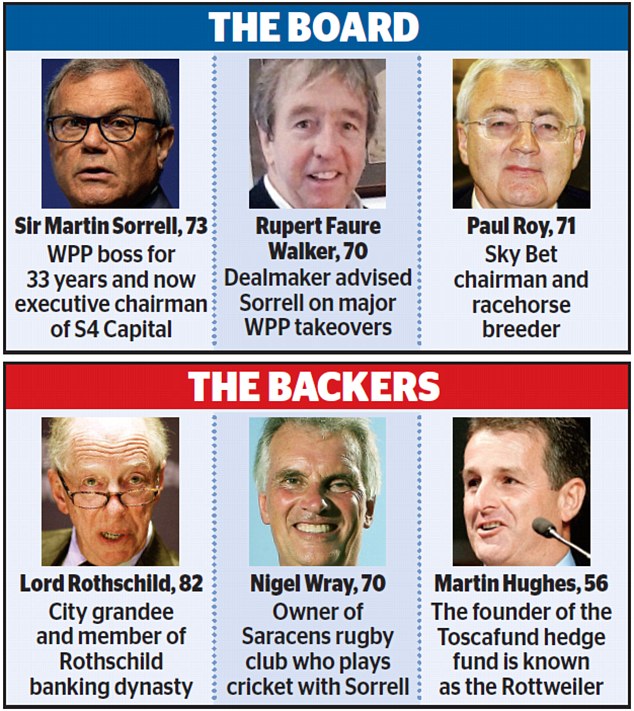 In addition to another £11million already raised, backers have also pledged a further £150million, giving Sorrell a £200million war chest for acquisitions.

Sorrell will be hoping to repeat his successful transformation of WPP from a maker of wire shopping baskets into a multi-billion pound success story.

‘Martin is Martin,’ one friend said yesterday. ‘He was never going to take up golf or grow roses.’

Sorrell, who was paid more than £130million in the past three years, abruptly left WPP on April 14 amid an investigation into his conduct, which still remains clouded in mystery.

It reportedly concerned a misuse of company funds but WPP has refused to reveal the nature of an internal probe or its outcome. Friends said Sorrell was left ‘bruised’ by the experience but in just 48 hours had decided he would make a comeback.

The people he called included Rupert Faure Walker, 70, the veteran financier who helped Sorrell stage WPP’s stunning takeover of US ad giant JWT Group in 1987, and Paul Roy, 71, the chairman of Sky Bet and NewRiver REIT.

They join him on the board, putting a trio of men in their 70s at the head of what is set to be one of the most closely watched marketing agencies in the world.

Sorrell also called on his friend Nigel Wray, the owner of Saracens rugby club with whom he plays cricket. Wray is an investor in Derriston as well as Dowgate Capital Stockbrokers, which advised on the deal with S4.

Discussions began at the beginning of May. Under the agreement, S4, a firm incorporated by Sorrell in Jersey on May 22 and named after the four generations of his family, will carry out a reverse takeover of Derriston.

The new outfit, which will take S4’s name, has secured the support of Lord Rothschild, through his private equity outfit Five Arrows, and Toscafund founder Martin Hughes as well as Miton, Lombard Odier and Schroders.

Sorrell will be executive chairman, with 75.2pc of shares. Roy and Faure Walker each take 1.4pc and become directors.

Directors, Harry Hyman, Rodger Sargent and James Serjeant, will resign and reduce their holdings to 0.38 per cent, 0.24 per cent and 0.35 per cent respectively. Sargent said: ‘We had considered a number of deals recently but the opportunity came up to do a deal with Sir Martin and we leapt at it.’

In recent weeks, twice-married Sorrell had hinted during public appearances that he was considering a comeback. ‘I’m not going to go into voluntary or involuntary retirement,’ he told an audience at a New York event.

S4 Capital is in talks with firms about acquisitions. Sorrell added: ‘There are significant opportunities for development in technology, data and content. I look forward to making this happen.’