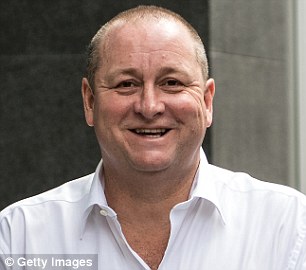 Sports Direct boss Mike Ashley was last night reported to be in talks over a £50million House of Fraser rescue deal.

The retail tycoon is believed to be considering making a loan to the ailing retail chain which is trying to close stores and axe jobs.

It emerged this weekend that a £70million cash injection into House of Fraser from Chinese backers would be delayed by several months, piling pressure on the chain.

Sky News said it had seen a letter from Sports Direct dated July 2 telling HoF it ‘would like to look at making an alternative offer’.

He reportedly said in his letter that Sports Direct could support HoF in areas such as warehousing, online sales and running the business.

Other parties have also been approached.