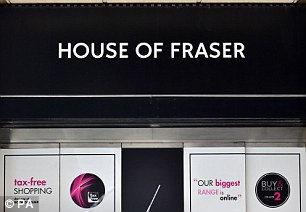 House of Fraser is considering axing at least 20 stores

Sports Direct is taking House of Fraser to court after the department store chain revealed plans to close a third of its shops.

The sports retailer, which owns 11.1 per cent of House of Fraser, claims it was ‘denied information to which it is legally entitled’ and has demanded to see the company’s corporate plan.

House of Fraser, owned by Chinese firm Sanpower, is considering axing at least 20 stores at the request of Chinese retailer C.banner which is interested in buying a 51 per cent stake in the department store.

Liam Rowley, from Sports Direct, said: ‘We have been frozen out by House of Fraser. Their dealings in China are opaque and it is blatant we have been unfairly prejudiced.’