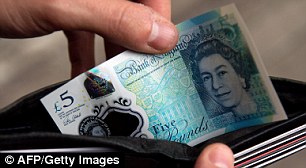 Sterling fell against the dollar and the euro yesterday as investors bet against an interest rate rise this summer after the worst month for British factories for six years.

In a sign the economy is struggling to bounce back following a slow start to the year, the Office for National Statistics said manufacturing output fell 1.4 per cent in April.

It was the sharpest fall since October 2012 and coincided with weak figures for trade and construction.

The National Institute of Economic and Social Research said that the economy grew by just 0.2 per cent in the three months to the end of May.

The pound fell below $1.34 against the dollar and towards €1.13 against the euro amid fresh doubts over the outlook for interest rates.