This could be the barn – or garage – find of the year.

It’s a tale of a US student who has uncovered not one but two iconic 80s supercars that have been untouched in her Grandma’s garage for two decades.

Coated in dust and covered in garage junk was a 1981 Lamborghini Countach worth around £350,000 if in pristine condition and a Ferrari 308 that has a value £80,000 if it were in glorious working order.

So, where did the cars come from? And why have they been left for so long to fall into a state of disrepair? There’s a simple explanation for it. 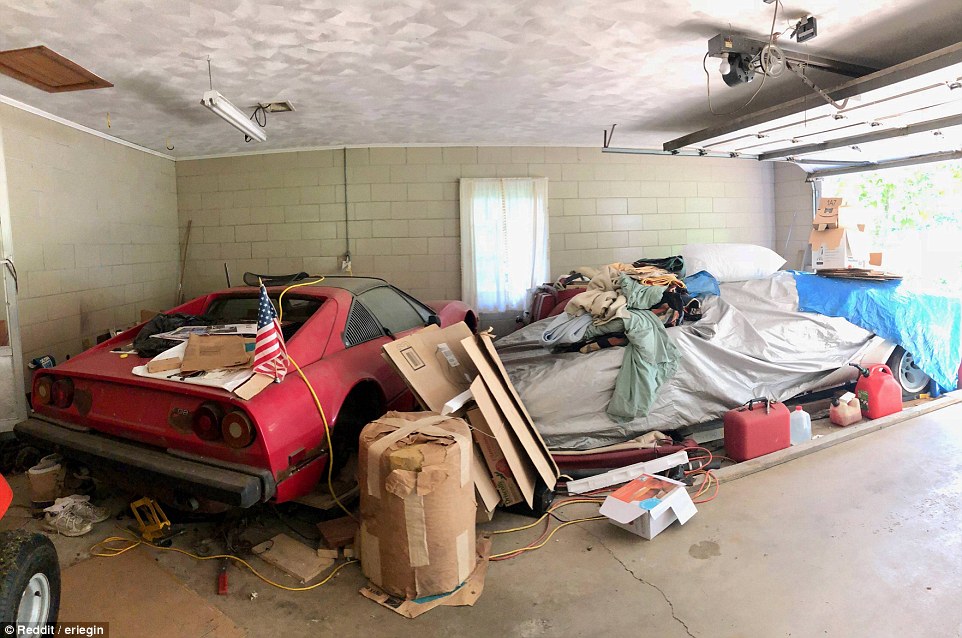 Grandma’s supercar garage: Covered in dust and surrounded in – and propping up – junk are two high-value 1980s supercars discovered in the US 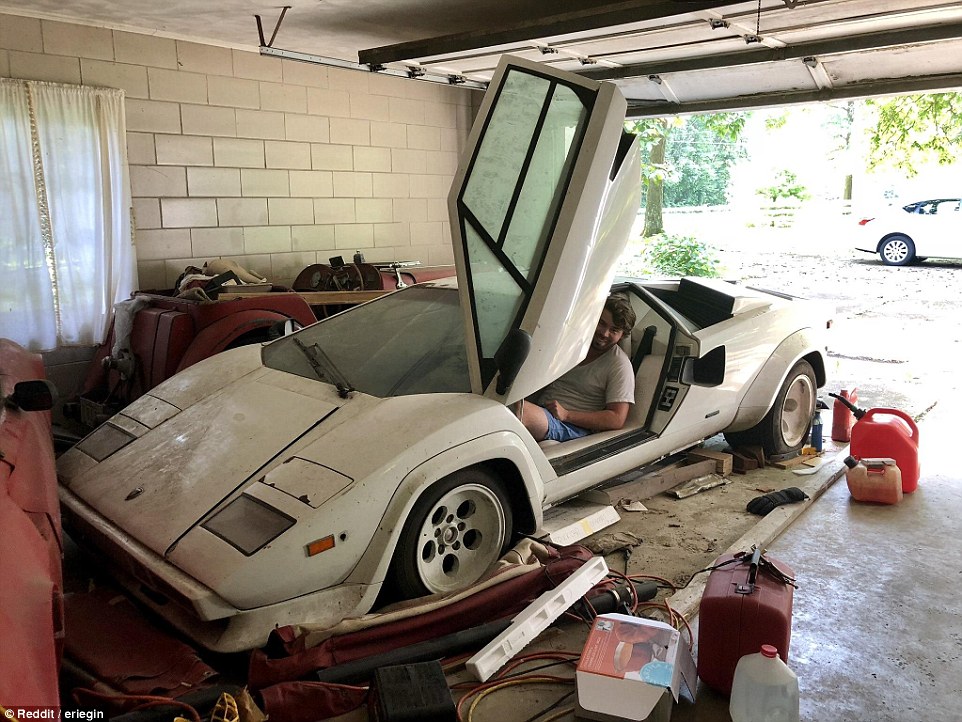 Reddit user eriegin posted images of the supercar find, which has begged the question: how did the end up there and why are they in such shocking condition?

The incredible discovery was posted by Reddit user eriegin, though it is unclear where in the US the vehicles were unearthed.

She originally posted a picture of the white Lamborghini with the caption: ‘Despite the rust and dust, grandma’s 1981 Lamborghini Countach is the coolest.’

Unsurprisingly, her post was met with in flood of demands for more pictures and an explanation for why her Grandma has two of hugely collectible supercars stored in her garage and why they have been left unmoved for two decades.

She later explained in a response on the thread: ‘My late Grandpa bought it for his exotic car rental business in 1989, but after insurance costs became too high for him to operate the company, he kept the car (and many others including the Ferrari 308 in front of the Lambo) outside and in leaky garages for 20+ years instead of selling them.

While the poster admitted that ‘this kind of car abuse hurts my soul’, she admitted that it was ‘incredible’ and ‘rare’ to see something so beautiful – and valuable – in such condition, and said the sorry state told a story about the cars that set them apart from others that have been polished and preened by collectors.

She later revealed that, being a broke college student who knows nothing about cars, she isn’t in the best position to make both vehicles roadworthy again, but hoped someone in the family might inherit them and return them to their former glory.

However, she also revealed that her Grandma was looking to move the vehicles on soon, and while they were not for sale she may be willing to accept offers.

So what could the pair be worth, if someone was willing to invest the time and cash to fund a restoration project? 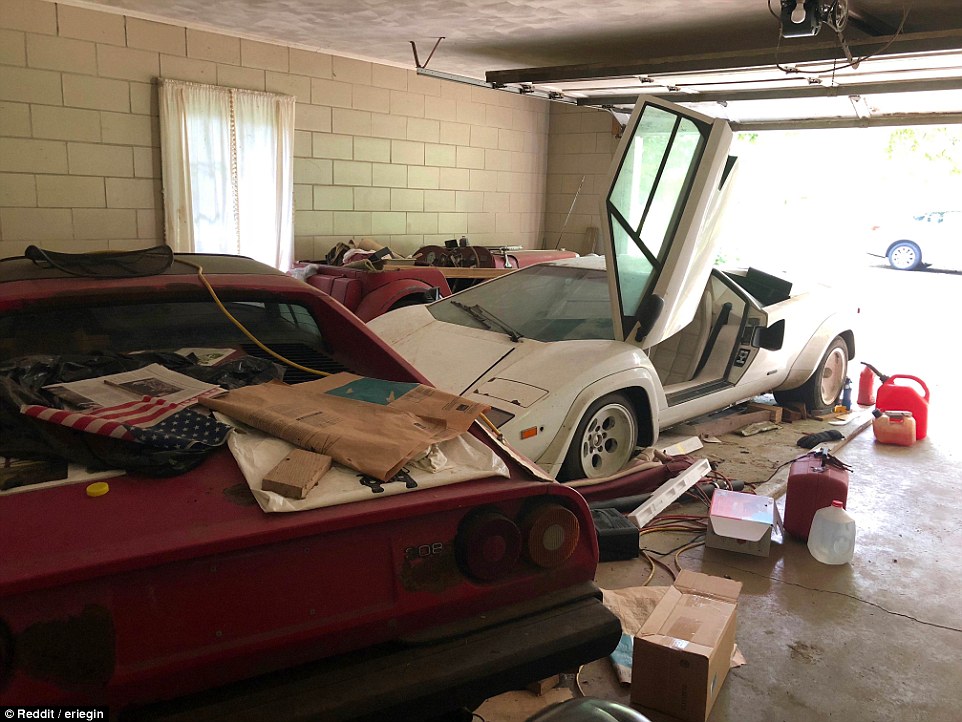 Both cars were purchased by the Reddit user’s Grandpa, who was setting up an exotic car rental business in 1989 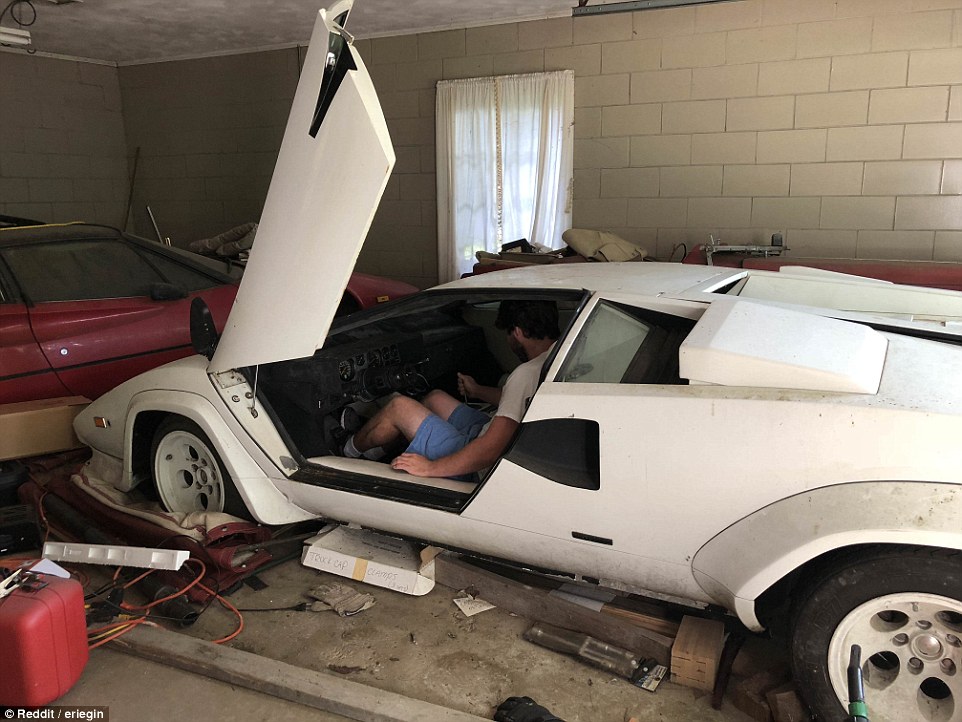 When insurance costs proved too expensive, the cars were retained and have not moved for the best part of two decades 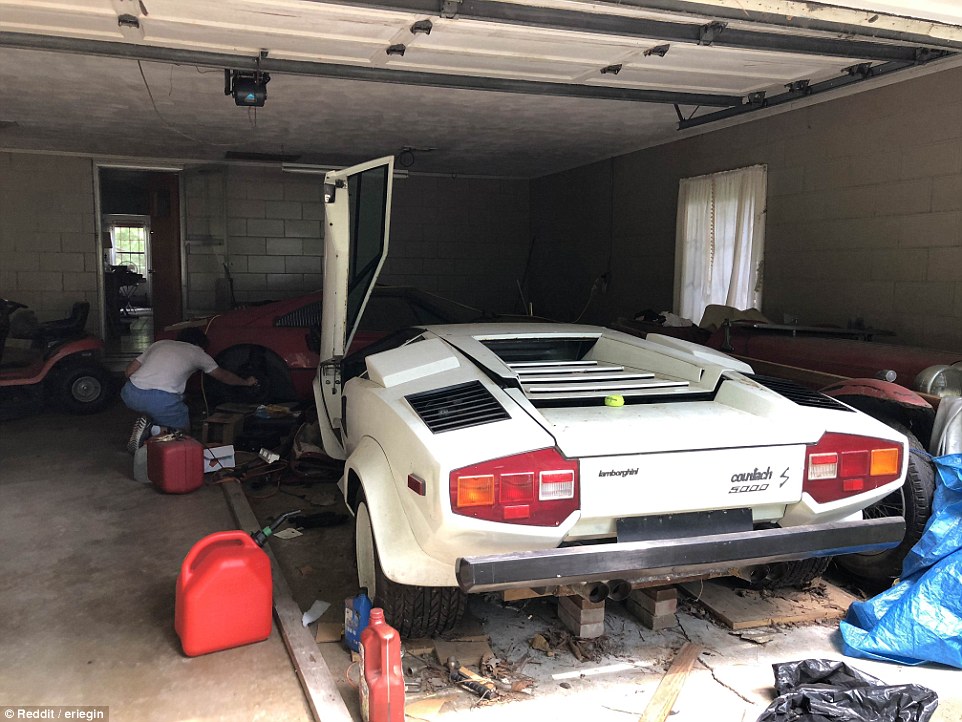 The Lamborghini Countach is thought to be a limited-run model, of which just 321 were built by the Italian manufacturer

The white Lamborghini – similar to the one that featured in 2013 film The Wolf of Wall Street – is particularly rare.

It appears to be special edition LP500 S, one of just 321 built by the Italian factory and ordered without the traditionally enormous Lambo rear wing.

If that’s the case, it will have a 4.8-litre V12 motor under the engine bay that produced 385 horse power when new.

Fitted with a five-speed manual gearbox, it would be good for a 0 to 62mph sprint in 5.6 seconds and a top speed of 186mph. 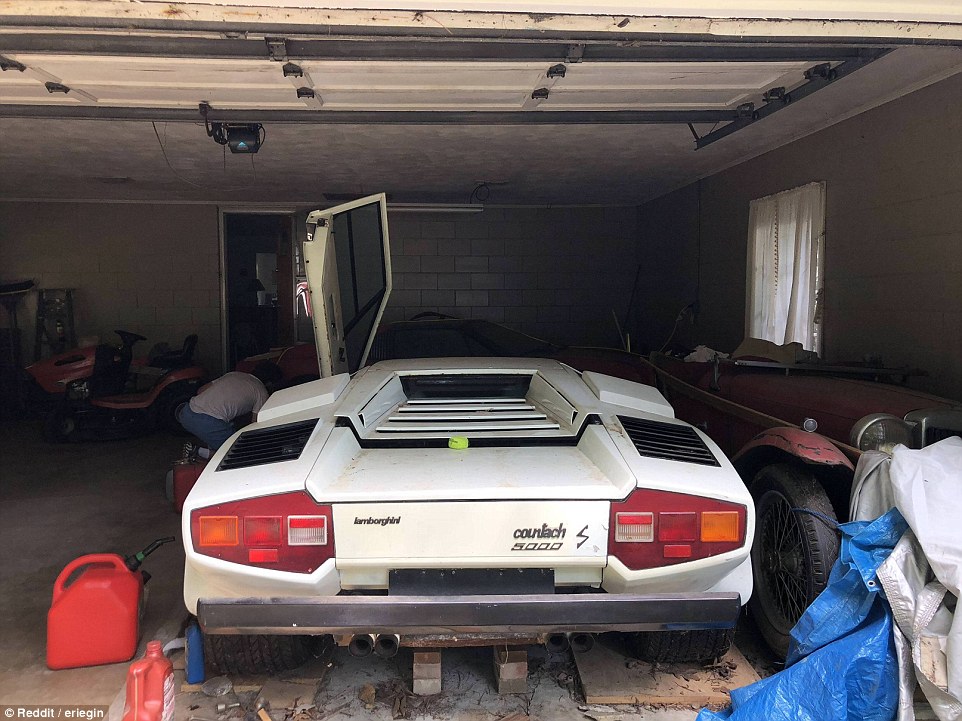 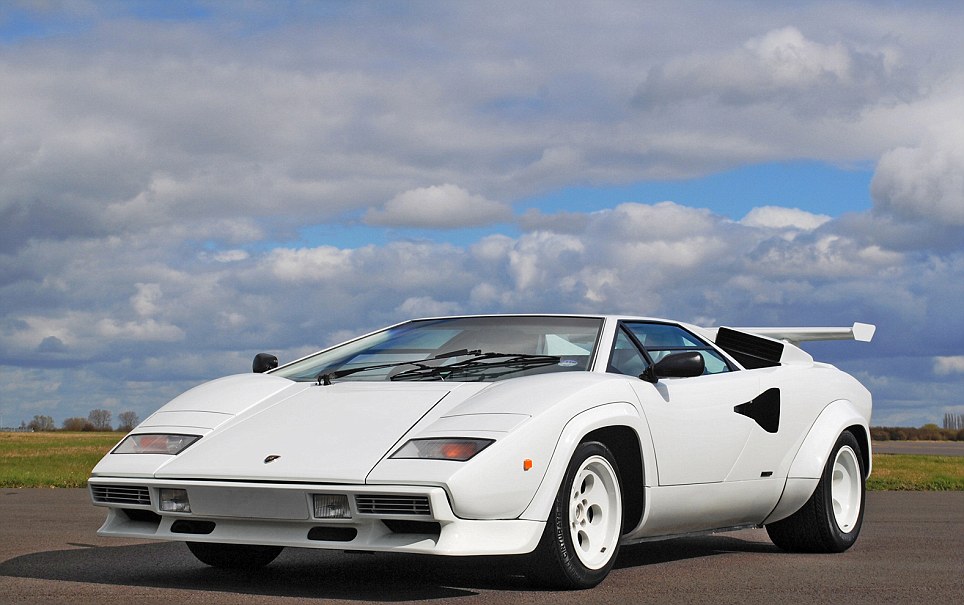 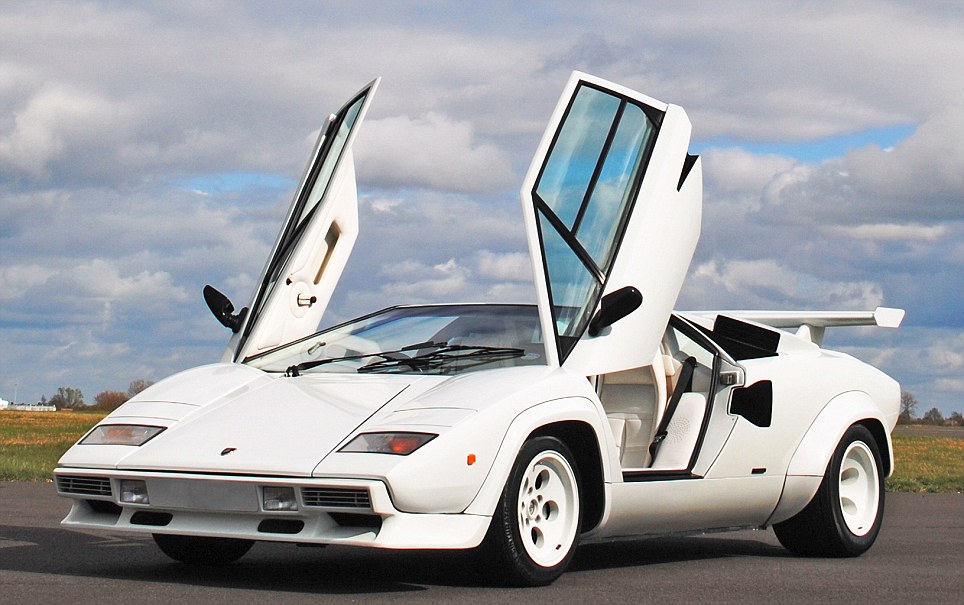 If reconditioned, it could look something like this – minus the rear wing. The garage-find Lamborghini is similar to the one used by Jordan Belfort – played by Leonardo DiCaprio – in 2013 film The Wolf of Wall Street

As for the Ferrari 308, that could take a bit more work.

It was noted by eriegin that the wheels had been stolen while the Fezza was sat on a trailer in a barn for years somewhere else – so any budding restorer will need to locate four authentic replacements.

This one is a GTS Targa model – like the one famously used by Tom Selleck in hit 1980s TV show Magnum, P.I.

It’s powered by a 2.9-litre V8 engine that produced 214hp in US spec – 237hp in Europe – and is also mated to a five-speed manual transmission.

Immaculate US-spec models are selling for between £70,000 and £80,000 today, so this might prove to be more difficult to make a profit. 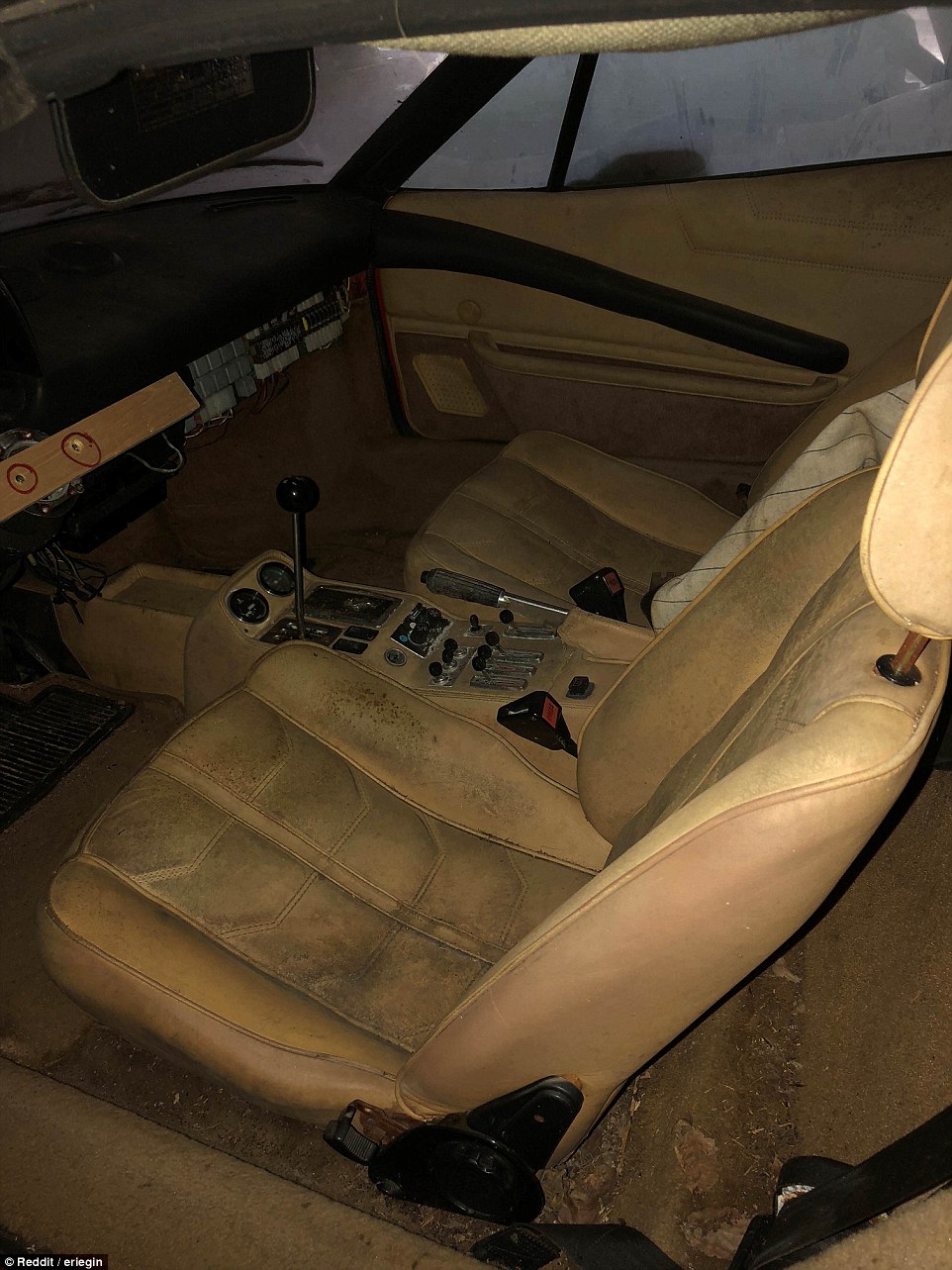 If you thought the outside was bad, images of the Ferrari’s interior show the sorry state it has been left to fall into 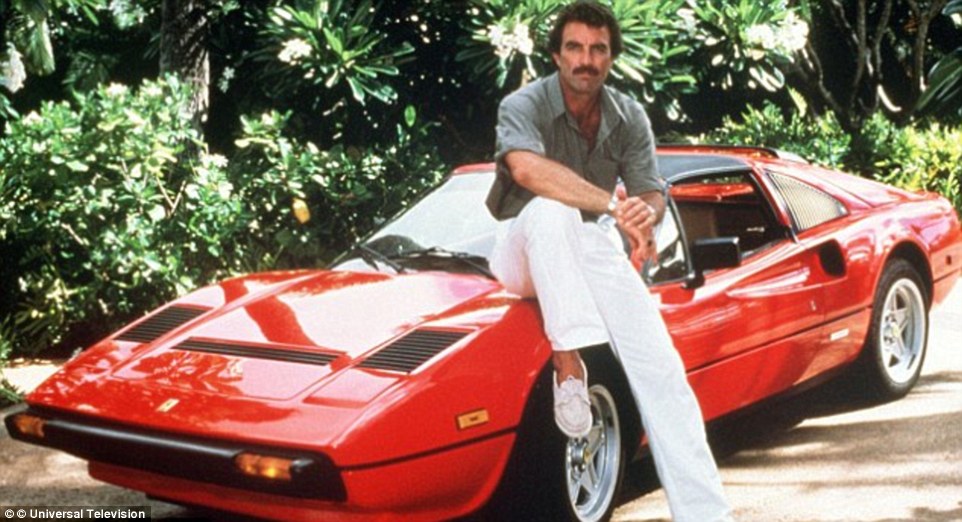 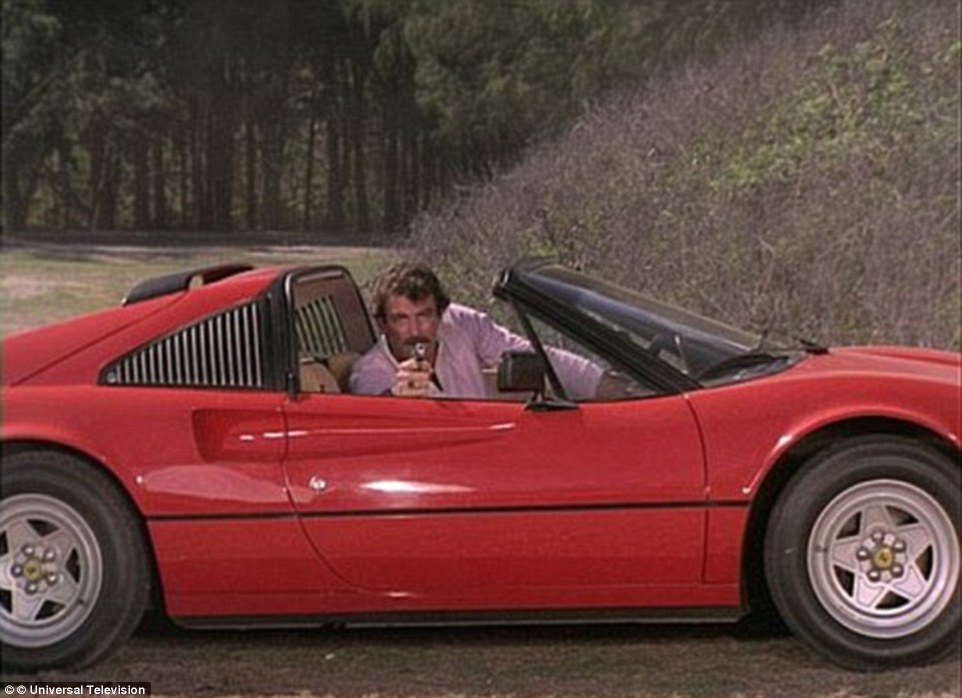 In US-spec, the Ferrari 308 GTS is less powerful than the same car sold in Europe. Still, it’s considered one of the greatest V8 Ferraris among enthusiasts

Also hidden in the garage-find pictures is a late 1930’s MG T-Type convertible, according to eriegin, and she also told readers that her grandparents once owned a 1955 Mercedes 300SL Gullwing.

It wasn’t confirmed if this was still in family ownership, though if it was that car alone is worth around £1million.

The moral of the story? Be nice to your grandparents, as you never know what you might inherit down the line.