The supermarket price war raging in Britain looks set to intensify as Aldi and Lidl fight back against the planned merger of Sainsbury’s and Asda.

In a boost to millions of families, the German discounters vowed to remain the cheapest option for customers if Sainsbury’s does slash prices following its £14billion takeover of Asda.

Sainsbury’s boss Mike Coupe –who was filmed singing ‘We’re in the money’ the day the deal was struck – has outlined plans to reduce the cost of everyday items by 10 per cent. 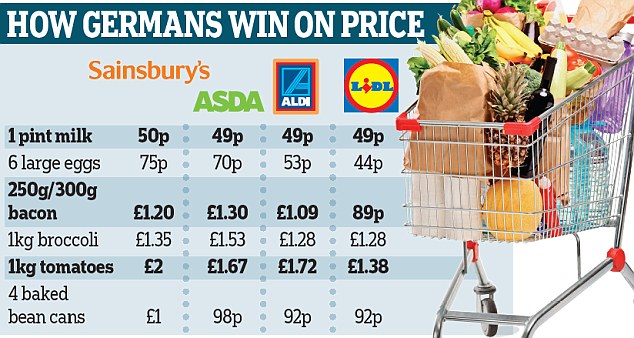 That would put pressure on Aldi and Lidl to respond – and even cut prices themselves.

An Aldi spokesman said: ‘We will never be beaten on price and are absolutely committed to maintaining the significant price gap between us and our competitors.’

A Lidl spokesman said: ‘Our customers can be assured that we cannot be beaten on price.’

Millions of families are already feeling better off as inflation falls from its recent peak of 3.1 per cent and wages rise.

A Sainsbury’s spokesman said: ‘We welcome competition and see this as more good news for British households.’ Sainsbury’s wants to use the increased buying power it will have following a tie-up with Asda to pressure suppliers into lowering prices.

Analysts warned that everyone from Marmite and Dove soap owner Unilever to the struggling farmers will feel the pain.

There are signs that consumer giant Unilever is already under pressure, with its prices up just 0.1 per cent in the first quarter.

Analysts said customers, including the grocery giants, are no longer willing to pay more for goods following Unilever’s row with Tesco over the price of Marmite 18 months ago, when the supermarket pulled its products from shelves.

‘Unilever has stopped pushing prices higher so the effects of the spat over Marmite prices with Tesco 18 months ago continue to rumble on. And if the supermarkets are strong enough to stand up to a multi-national such as Unilever, with its powerful brands, then smaller suppliers could be in for a really tough time.’

Mike Cherry, national chairman of the Federation of Small Businesses, said: ‘A merger of this size will concentrate a lot of power in the hands of one giant company, and it’s important that power isn’t misused to coerce small suppliers into accepting unfair contracts and poor payment terms.’

The Big Four supermarkets in Britain – Tesco, Sainsbury’s, Asda and Morrisons – have faced an onslaught from Aldi and Lidl.

The German discounters have been gaining market share in the UK by undercutting larger rivals. Lidl sales rose 9.1 per cent in the 12 weeks to April 22 while Aldi sales were up 7.7 per cent. By contrast, Sainsbury’s sales were up just 0.2 per cent and Asda’s 1.4pc.

The proposed merger of Sainsbury’s and Asda, owned by US giant Walmart, would create a supermarket giant with £51billion of annual revenues and a 31.4 per cent share of the market.

The combined group would be bigger than the current leader Tesco, which has a 27.6 per cent share of the grocery market. Morrisons has 10.5 per cent, Aldi 6.9 per cent, Co-op 6.1 per cent, Waitrose 5.2 per cent and Lidl 5 per cent.